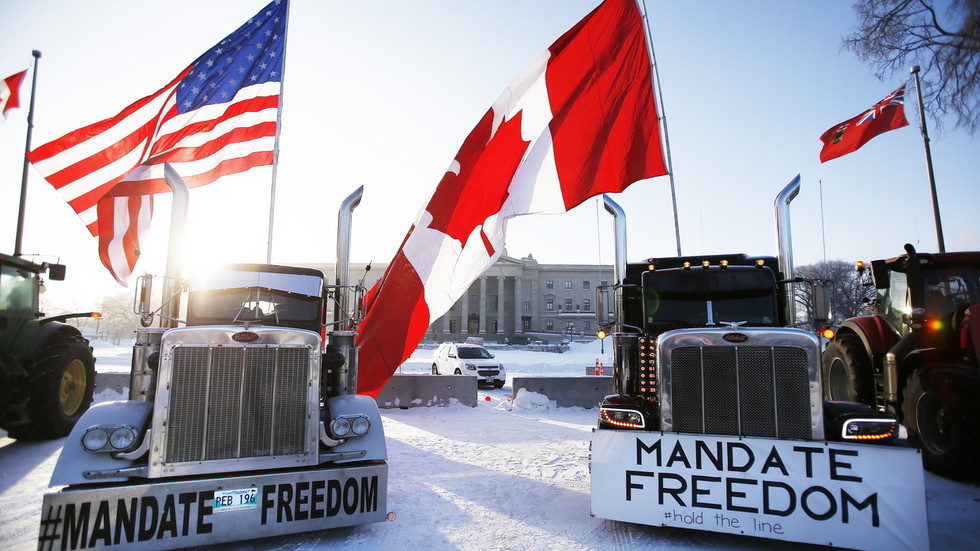 Ottawa police services board held an emergency meeting on Saturday afternoon, but failed to devise a clear plan of action against truck drivers and their supporters protesting the country’s Covid-19 mandates for over a week now.

“We are on day eight of this occupation. Our city is under siege. What we’re seeing is bigger than just a City of Ottawa problem. This is a nationwide insurrection. This is madness. We need a concrete plan to put an end to this,” said the chair of the board, Diane Deans, at the beginning of the nearly 2-hour-long virtual meeting.

Ottawa police chief Peter Sloly agreed with her portrayal of the situation, saying that local law enforcement “were never intended to deal with a city under siege,” and decried the lack of resources – and legal authority – to disperse the protest.

Deans asked Solly what kind of resources and help he needs to put an end to the demonstration “right now,” and whether he wants the city to request the assistance from the federal government or even the military. Solly said there is “no quick answer” as the situation is constantly evolving, and reiterated that “we do not have sufficient resources to adequately and effectively address this situation.”

At one point, Deans wondered whether the city had legal grounds to declare an unlawful assembly and then a riot, in order to conduct mass arrests, instead of pursuing “one criminal charge at a time.”

“There are so many people out there engaged in a broader act of… mayhem, that we need to be able to bring it all under control,” she said.

As of Saturday afternoon, police estimated at least “500 heavy vehicles associated with the demonstration to be in the red zone,” as thousands of people joined the protest at Parliament Hill and elsewhere across Ottawa for a second weekend. Smaller groups of counter-protesters were also reported in the streets, even as a major rival event was called off last minute.

Protesters pledged to remain in the streets until all mandates and Covid-19 restrictions are gone. Authorities blasted the protest as a well-organized disruptive occupation, painting them as an “increasingly volatile and increasingly dangerous” nuisance to the livelihoods of law-abiding citizens.


Ottawa police have previously announced they will deploy any and all possible resources and tactics to shut down the Freedom Convoy. During a press conference on Friday, Sloly even warned his fellow officers that anyone seen giving “food, water, fuel, logistics, or funding” to a protester would be prosecuted to the fullest extent of the law.

Officers are collecting driver IDs, registration and insurance information, and financial information where possible to assist in future prosecutions, Sloly warned. While the police chief praised the force for reducing the number of trucks in Ottawa city center over the last week, he insisted the force takes “no solace in these operational successes to date,” arguing instead that its goal is to “end the demonstration” by any means necessary.

“Everything is on the table,” the police chief reiterated during the presser, saying that the scale of the protest was “unprecedented.” The police chief repeatedly conjured the specter of the January 6 Capitol riot in the US, implying that his force was the only thing standing between the peaceful protest and utter chaos.