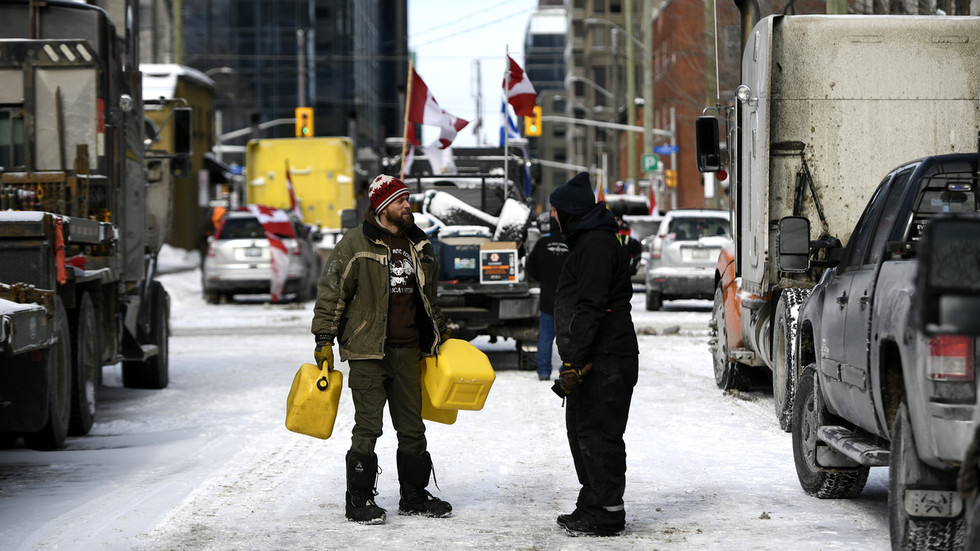 Anyone who attempts to provide “material support” to the Freedom Convoy truckers and other anti-Covid mandate protesters could be subject to arrest, Ottawa police announced, as mayor Jim Watson declared a state of emergency in the city.

Police issued the warning on Twitter on Sunday afternoon. Asked whether “material support” included vital necessities like food and water, a police spokesperson told Fox news that the announcement “relates to hazardous materials that represent a public safety or fire hazard.”

Officers on the ground in downtown Ottawa reportedly told the drivers that after midnight on Sunday no gas and diesel cans or propane tanks would be allowed into the area.

Officially the Ottawa Police Service would not comment on the alleged deadline, saying that they do not speak about operations “for officer safety reasons,” according to the Ottawa Citizen.

According to several videos shared on social media, police have already seized multiple batches of fuel from protesters, but there were no reports of arrests as of 9pm local time.

Mayor Jim Watson declared a state of emergency in Ottawa on Sunday afternoon, citing “serious danger and threat to the safety and security of residents,” as the Freedom Convoy shows no signs of ending.


“The situation at this point is completely out of control because the individuals with the protest are calling the shots,” Watson said, adding that the protesters have “far more people than we have police officers.”

Over the past week, authorities placed heavy barricades at key crossing points throughout downtown and closed multiple roads, effectively blocking new trucks with full tanks of fuel from coming into the so-called ‘red zone’, so the protesters started using gas cans. Now authorities seek to cut off this lifeline as well.

The protesters have promised to hold the line until the government repeals its vaccination mandates and QR code “health passports.” Organizers have indicated they plan to stay in Ottawa for the “long haul,” seeking donations from supporters to cover the costs of fuel, food and lodging. After fundraising platform GoFundMe froze some $7 million in donations, following “discussions” with Canadian authorities, the movement regrouped on competitor GiveSendGo, raising another $3.8 million in less than three days.

Even though the protesters have largely refrained from violence and property damage, police accused them of “extremely disruptive and unlawful behavior, which presented risks to public safety and unacceptable distress for Ottawa residents” – while some officials repeatedly conjured the specter of the January 6 Capitol “insurrection” in the US.