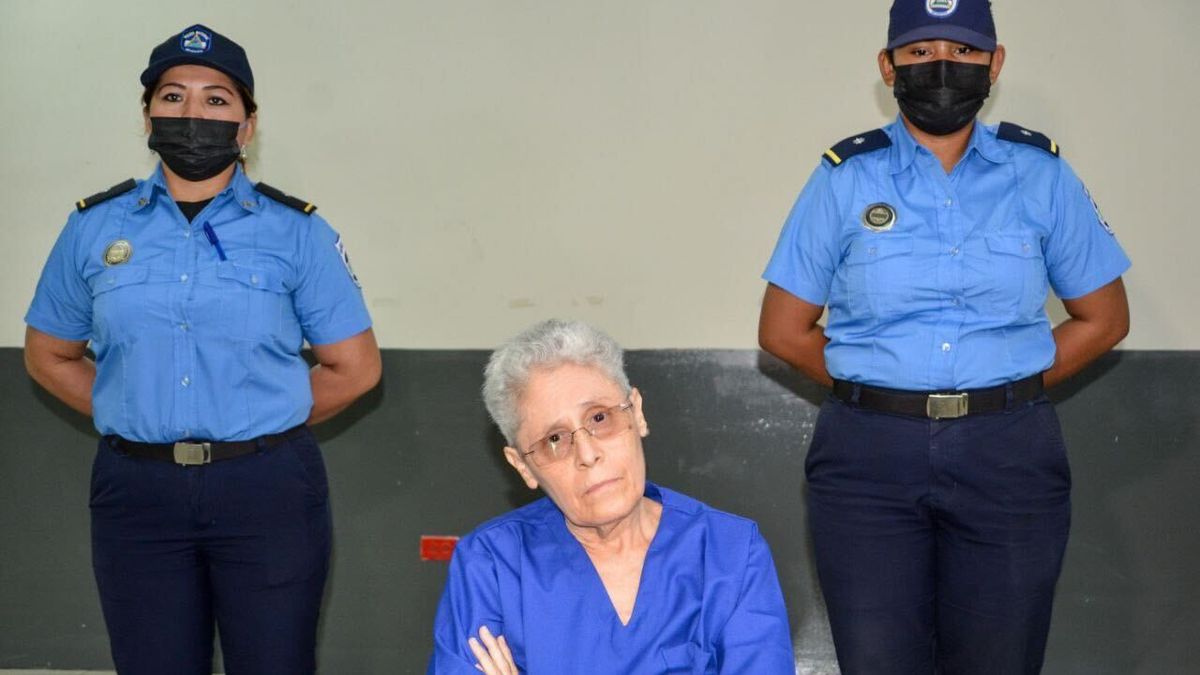 After more than 400 days of being locked up in total isolation, Nicaraguan political prisoners – jailed under the dictatorship of President Daniel Ortega and his wife, Vice President Rosario Murillo – were displayed in court for the first time since their incarceration. They have been held in the Directorate of Judicial Assistance – known as “El Chipote” – a prison known for its horrific conditions.

Opposition candidates, political activists, journalists, businessmen and farmers have been brought to the Managua Court of Appeals in recent days, purportedly to attend hearings that have been classified as “informative.” The pallor and gauntness of the inmates is evident from photographs – witnesses say that the political prisoners were bothered by the light in the courtroom, as they have been confined to dark spaces for over a year.

The exhibition of the political prisoners began unexpectedly on August 30, one day after their relatives denounced in a press conference that the food rations in El Chipote had been severely reduced. Police sources told EL PAÍS that the starvation policy was imposed on August 19, when priests working with Monsignor Rolando Álvarez – the Bishop of Matagalpa, who has been under house arrest for the past two weeks – were arrested.

Before the arrival of the priests in El Chipote, food portions had actually been increased. This was attributed to photos of imprisoned opposition politician Félix Maradiaga that were leaked in July: the images showed a dramatic weight loss of more than 60 pounds. The emaciated condition of the former presidential candidate produced an outcry.

“Last month [the political prisoners] were given a huge amount of food. Excessive rations, after the first photo of Félix came out. Some prisoners [were even] given cortisone to relieve pain… that has also influenced the sudden weight gain, so as to present them with a better appearance,” a police source explained.

Gonzalo Carrión, a lawyer with the Nicaraguan Human Rights Collective, currently living in exile in Costa Rica, said that the dissemination of photographs of political prisoners is intended for the international community, so as to discredit the complaints made by their relatives.

“Some are [obviously] physically deteriorating… but the regime [simply wants] to show that the political prisoners are alive.”

The prisoners of conscience who have lost the most weight over the last 400 days are: attorney José Pallais (90 pounds), political commentator Jaime Arellano (80 pounds) and peasant leader Medardo Mairena (73 pounds). Others, such as financial consultant Walter Gómez, political scientist José Antonio Peraza and peasant leader Pedro Mena, have lost about 60 pounds each.

The Nicaraguan Center for Human Rights (Cenidh) criticized this parade of political prisoners, denouncing it as yet another abuse by the Ortega regime against its opponents and their families. Cenidh also notes that “informative hearings” do not even exist under Nicaraguan law.

“All of these political prisoners have already been notified of their convictions, ratified by the Court of Appeals… this is [merely] another abuse by the regime and another crime by the judges and magistrates.”

Edgar Stuardo Ralón – Vice President of the Inter-American Commission on Human Rights (IACHR) – has recently used a term that, until now, has not been mentioned in Nicaragua: “white torture.” Stuardo Ralón has accused the Ortega-Murillo family of subjecting prisoners of conscience to this particular torture.

“The term is used when there are prison regimes of extreme isolation,” he says. “The goal is to deprive the person being tortured of their mental health and identity.” This is often combined with poor dietary intake.

“White torture” is a relatively modern method of torture, used by countries such as the former German Democratic Republic, Iran, Israel, the United States, Venezuela or Cuba, among others, according to reports from human rights organizations.

Although it is unknown if this surprise exhibition of prisoners is in response to any domestic or international pressure, on Tuesday, the Colombian Foreign Ministry issued a statement hinting at “negotiations” with Managua. The recently-elected government of President Gustavo Petro issued this statement to counteract the criticism caused by the absence of his country in a session of the Permanent Council of the Organization of American States, in which the Ortega dictatorship was condemned for repressing the Catholic Church.

“Colombia’s absence was due to both strategic and humanitarian reasons and not ideological ones,” claims the Colombian Foreign Ministry. “The window of opportunity for major humanitarian action in Nicaragua coincided with the vote… diplomatic silence was maintained, due to the fact that we could not publicly reveal the international negotiations that were being carried out before obtaining a result.” No further details were given.