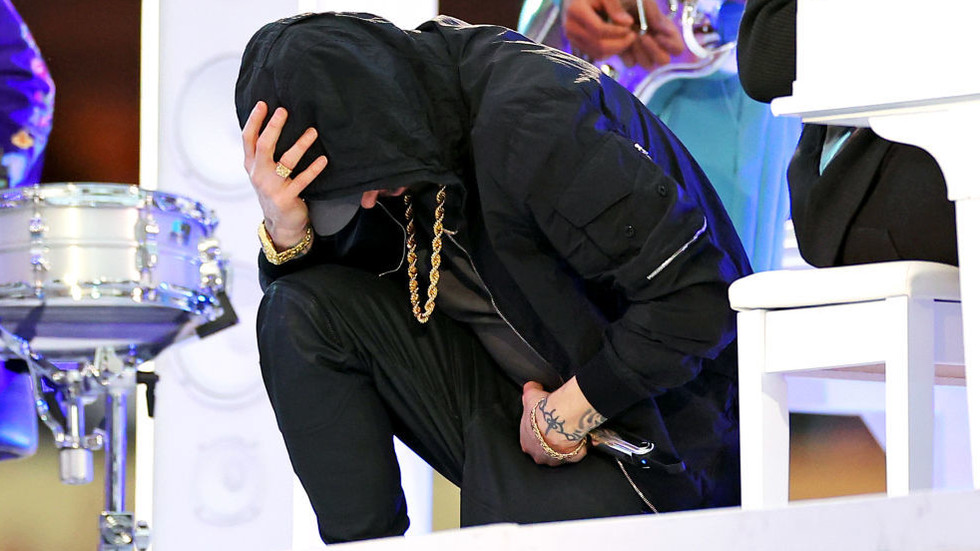 The NFL has denied trying to stop Eminem from taking the knee at Super Bowl LVI, saying it was aware the rapper would perform the controversial protest at half-time at the SoFi Stadium in California.

The star-studded half-time show at the home of the Los Angeles Rams was one of the most anticipated elements of the flagship game on the NFL calendar as Sean McVay’s team beat the Cincinnati Bengals 23-20 to win American football’s most coveted prize.

Rumors circled that the NFL had tried to prevent Dr. Dre from using the line “still not lovin’ police”, from his popular 1999 hit ‘Still D.R.E.’, and Eminem from taking the knee.

“We watched all elements of the show during multiple rehearsals this week and were aware that Eminem was going to do that,” claimed league spokesman Brian McCarthy.

Eminem – real name Marshall Mathers III – made the gesture at the end of his performance of his Oscar-winning anthem ‘Lose Yourself’, from 2002 semi-autobiographical movie ‘8 Mile’.

Dressed in a black hoodie, baseball cap and jeans, Detroit native Mathers took the knee on stage, put his right hand to his head and looked downwards.

Some suggested the move was a tribute to the late Tupac Shakur, who Dr. Dre honored by including their Grammy Award-nominated collaboration, ‘California Love’, in his West Coast hit medley and by playing a part of the piano loop from Shakur’s song ‘I Ain’t Mad at Cha’.

The taking of the knee for Black Lives Matter at high-profile sports events around the world has become particularly prevalent since the killing of George Floyd in the US in May 2020, resulting in a string of controversies relating to the debate around its meaning and value.

Critics believe that taking the knee is an empty and even divisive gesture, while its exponents argue it is vital in battling racism.

Yea Eminem kneeled to honor 2pac while Dre was playing “I ain’t mad at cha” context is very important. For the people that don’t understand

You do not know that for sure. Considering Eminem’s political views and the fact it was during a NFL game it’s possible it was the Kaepernick kneel to protest police brutality. pic.twitter.com/Az8VozBNbv

Shortly after Donald Trump attacked NFL players who take the knee and told fans to boycott games where they saw the gesture being carried out in 2017, Eminem performed a freestyle verse taking aim at the then-US president at the BET Awards – a celebration of African Americans.

“But this is his form of distraction, plus he gets an enormous reaction when he attacks the NFL so we focus on that instead of talking Puerto Rico or gun reform for Nevada,” Eminem sang in one of his verses, suggesting that Trump was “bored and would rather cause a Twitter storm with the [Green Bay] Packers” than face “all these horrible tragedies” in the US.

“Hands up, officer, don’t shoot… then pull your pants up, promise you won’t loot,” Eminem rapped in part of the song about the tragic incident in 2015.

The ritual of kneeling for Black Lives Matter was started by ex-San Francisco 49ers quarterback Colin Kaepernick during the 2016 season.

Social activist Kaepernick took the knee when the US national anthem was played pre-game to protest against police brutality and social injustices the black community suffers in the US.


Other players followed suit but Kaepernick was eventually hounded out of the league and has been unable to find a new employer since his 49ers contract expired.

The issue of kneeling has polarized fans, players, franchises and owners. Kaepernick made a Netflix documentary touching on race issues last year and has a Spike Lee-produced ESPN docuseries in the pipeline.

The taking of the knee had become a less fiercely-debated issue in the NFL, but the gesture has now returned to the forefront of public view after Mathers resurrected it on one of sport’s biggest stages.