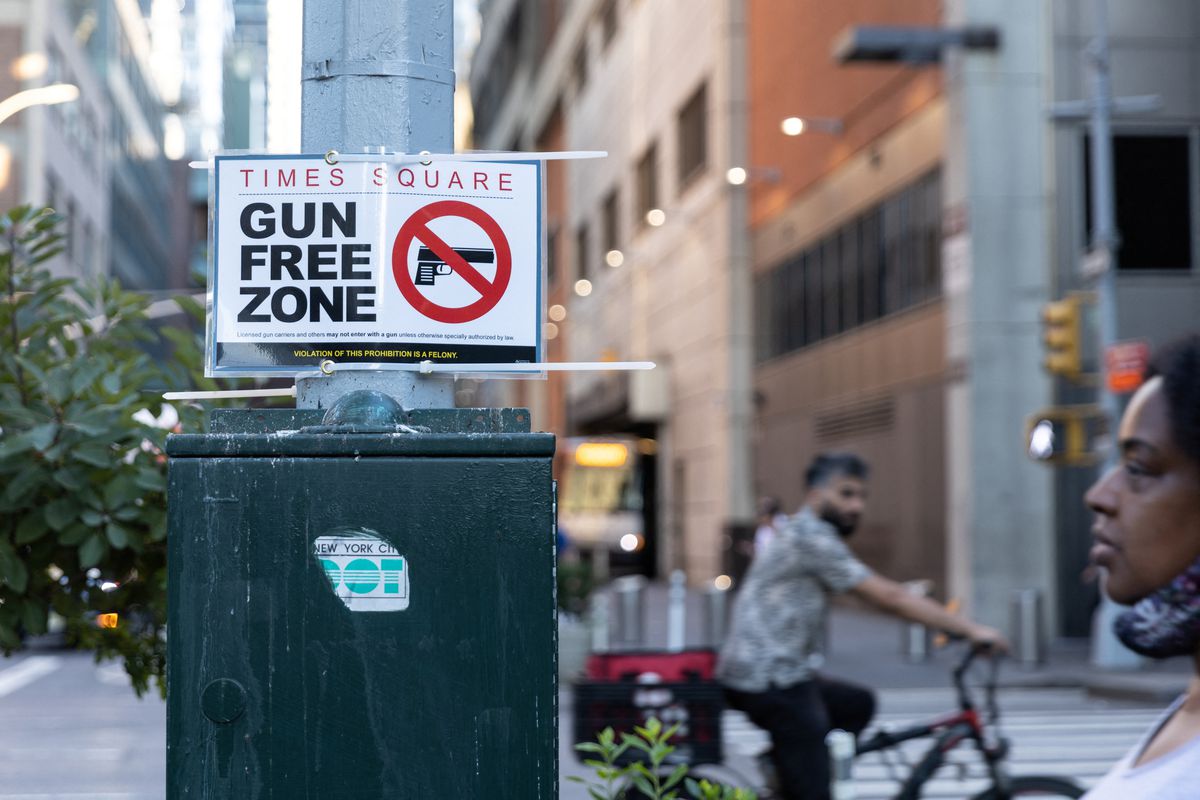 At midnight on September 1, a busy New York City tourist area became a gun-free zone. Times Square, which has been a frequent scene of past shootings, will be the urban standard bearer for a New York state policy aimed at countering the US Supreme Court’s ruling that a long-standing New York law requiring a license to carry concealed weapons in public places is unconstitutional.

Dozens of signs have been posted around this high-profile gun-free zone, an area that is difficult to delineate because there is no square at Times Square. Six hours before the measure went into effect, it was difficult to find one of the laminated cardboard signs strapped to streetlights. Despite the city’s publicity campaign promising numerous, highly visible signs, they were conspicuous by their absence during a cursory tour of the area’s southern perimeter: just one sign at the intersection of Sixth Avenue and Bryant Park, and a pair of larger, lighted signs at the intersection of 40th Street and Sixth and Seventh Avenues. There seemed to be more police officers than signs, and we didn’t see anyone taking “Gun-Free Zone” selfies, belying New York’s reputation as the city with the highest percentage of selfies per square foot in the world.

Times Square, where the city’s New Year’s Eve celebration takes place, is in the heart of Broadway. There’s nothing remarkable about it except for the overwhelming number of garish neon and LED signs plastered over every building façade. But now that tourists have returned to the Big Apple, tighter security is a wise investment for the city. Times Square bustles with non-stop activity, as an army of costumed Disney characters, Marvel superheroes and other assorted snake charmers pose for tourist photos. Gun permit applications in New York City have increased by 54% since the Supreme Court ruling, and the number is skyrocketing throughout the state.

Logistical details are complicating the implementation of the gun-free zones, such as figuring out where Times Square begins and ends, sorting out permit backlogs, and where to place the flimsy signs. The New York Police Department promised signs at every entrance to the designated area, but that didn’t happen by the September 1 deadline. A map released on August 31 by Mayor Eric Adams indicating sign locations on a neatly delineated grid omitted some key points of access to Times Square.

The Bruen decision may open a river feeding the sea of gun violence, but we’re doing everything we can to dam it.

The safety and security of 8.8 million people is my responsibility and we will protect our people. pic.twitter.com/rIehO05u3b

The city’s gun-free zone is broad and extends several blocks beyond the heart of Times Square. It includes the lobby of touristy Rockefeller Center, almost all of the Broadway theaters, the New York Times headquarters building, and the Eighth Avenue bus terminal. People with gun permits who venture into this area carrying their weapons will face criminal charges, unless they are security officers or have a waiver (such as area residents and business owners, and retired police officers). People who work in the 47th Street Diamond District, an entire street full of jewelry stores, are also exempt.

The Times Square gun-free zone is the most visible component of the state’s response to the Supreme Court ruling that struck down the state’s strict concealed carry laws, but it’s not the only one. The high court also cited the arbitrariness of determining “just cause” for granting or denying the permits. But just because it is illegal now to carry a gun in the designated zone does not guarantee peace and quiet in the area. Just hours before the gun-free zone rule took effect, a woman was shot to death in a nearby square — the latest in a long and bloody stretch of violent crime.

New York takes prides in being a champion of progressive causes, whether it be gun control or abortion. Democratic candidates in the primaries for the November mid-term elections unanimously proclaimed their support for voluntary termination of pregnancies. But there is not as much agreement on the subject of gun-free zones. Beyond the difficulty involved in enforcing the measure in a porous and chaotic city, is the issue of the suitability of the designated zones. The Supreme Court ruling opened the door for the designation of “sensitive areas” where guns are not allowed, such as schools and hospitals, but indicated that the areas could not be overly broad. The Times Square gun-free zone is definitely broad.

The majority opinion written by conservative Supreme Court Justice Clarence Thomas stated that there is no historical basis for New York to declare Manhattan Island a “sensitive place” simply because it is crowded, noting that it is already generally protected by the city’s police force. Governor Hochul and the state legislature responded by designating a wide range of “sensitive areas” in which even legal guns will continue to be prohibited. They also approved new requirements for obtaining a gun license such as training courses and more thorough background checks. These new requirements took effect at the same time as the gun-free zones.