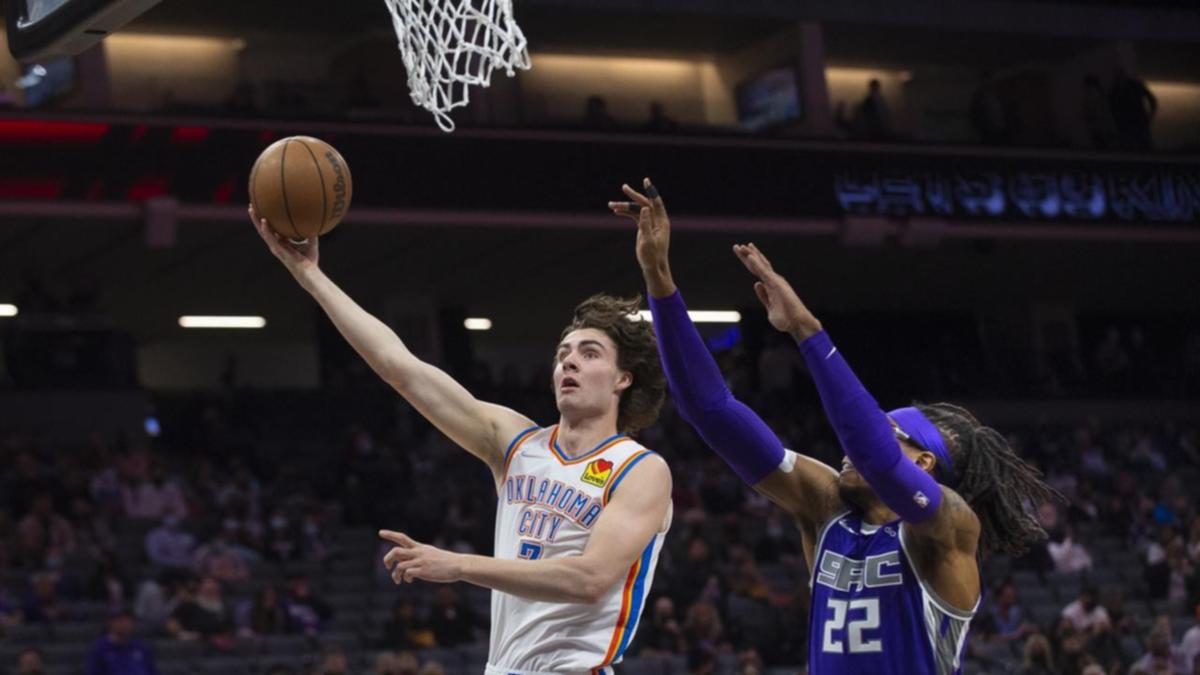 Josh Giddey has produced the highest points tally of his outstanding NBA rookie season, scoring 24 for the undermanned Oklahoma Thunder.

Giddey played a big role as the Thunder surprised by stringing together three straight wins since their leading scorer Shai Gilgeous-Alexander was sidelined by an ankle injury.

But a fourth consecutive win proved beyond them in Sacramento as fellow starter Luguentz Dort also sat out the Kings game with a bruised face.

Giddey drained a three-pointer to put the Thunder ahead 66-65 but that was the only time they led.

In Los Angeles, LeBron James amassed 29 points, 13 rebounds and 10 assists in his return from a knee injury as his Los Angeles Lakers rallied to outlast the New York Knicks 122-115 in overtime.

The Lakers trailed 71-56 at halftime before rallying in the third quarter, outscoring the Knicks 31-13.

Malik Monk scored 29 points and teammate Anthony Davis added 28 points and 17 rebounds for the Lakers while R.J. Barrett scored a career-high 36 points for New York and teammate Julius Randle had 32 points and 16 rebounds.

The NBA-leading Phoenix Suns rebounded from a streak-ending loss to beat the short-handed Washington Wizards 95-80.

Deandre Ayton had 20 points and 16 rebounds in an efficient 24 minutes, in his third game since returning from a sprained right ankle.

The Suns (42-10) bounced back from a loss on Thursday night at Atlanta that ended an 11-game winning run.

Phoenix led by 27 points at the half and 36 in the third quarter.

The Wizards set offensive season lows – and the Suns defensive bests – with just 11 points in the second quarter and 32 in the first half.

Montrezl Harrell scored 15 points for Washington, who have lost seven of their past eight games to sit 11th in the eastern conference.

In Orlando, Ja Morant scored 33 points in three quarters in the Memphis Grizzlies’ 135-115 win over the NBA-worst Magic.

The Grizzlies (37-18) are sitting pretty as the third seeds in the west, behind only Phoenix and Golden State.

The Miami Heat made it back-to-back victories by cruising past the Charlotte Hornets 104-86, with Jimmy Butler scoring a game-high 27 points.

The win left the Heat (34-20) just a game behind the Chicago Bulls in the battle for top spot in the tight east, with the top eight separated by just five wins.

Charlotte are ninth after a fourth successive loss.