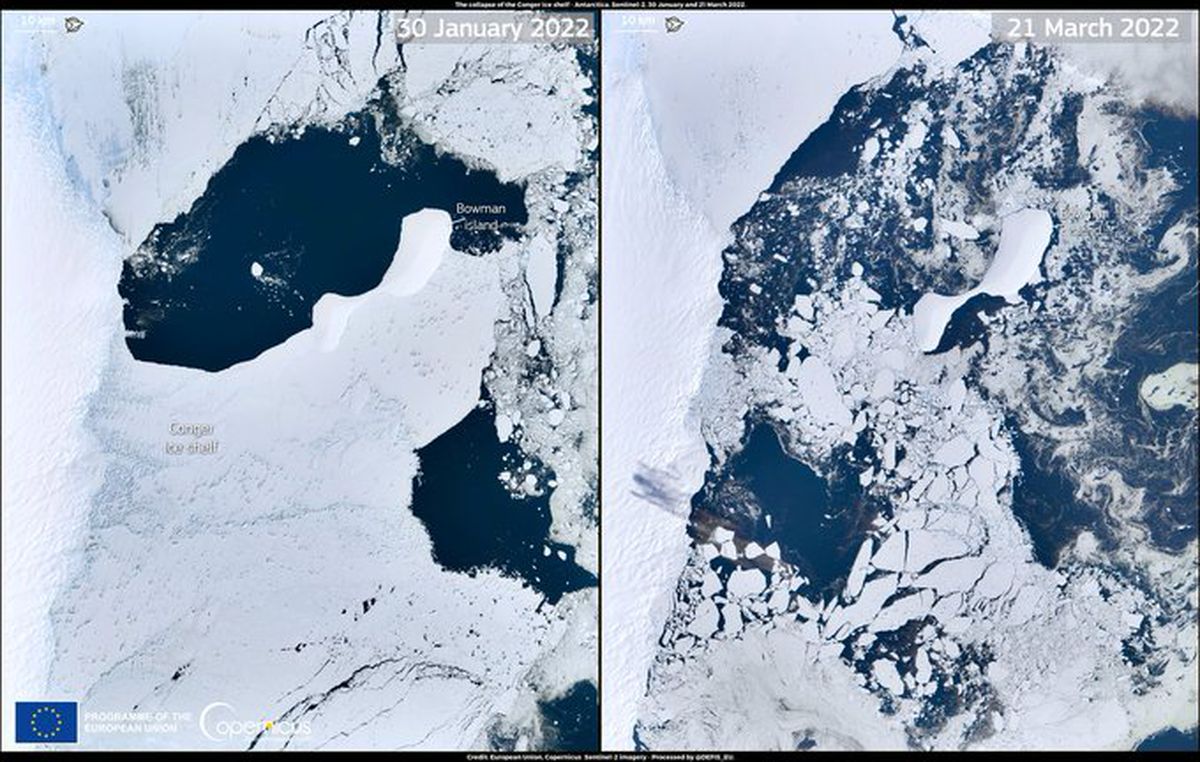 A huge millennial ice shelf measuring some 463 square miles – roughly the same size as the city of Rome – has collapsed on the Conger Glacier in the eastern Antarctic, disintegrating into thousands of icebergs that are now drifting in the Southern Ocean. The largest of these, called C-8, measured 123 square kilometers when it broke away, although it has since fractured into smaller parts. Now, these icebergs are covering around 40 miles a day in a west-northwesterly direction, according to the US National Snow and Ice Data Center, which analyzes NASA satellite images.

The collapse of the ice shelf occurred in a region of Antarctica that was thought to be considerably more stable than the western half of the continent, and at the same time as a heatwave that saw temperatures rise to 40ºC above the March average. Temperatures still did not rise above zero but scientists suspect the unseasonal warmth was behind the collapse of the shelf, although they stress that more information remains to be analyzed on top of the satellite images.

In any case, this shelf, which is fed by both the Conger Glacier and the nearby Glenzer Glacier, appeared to be intact at the beginning of March, which means its disintegration has taken place over the space of just two to three weeks. “It was quite the blowout,” NASA quoted glaciologist Christopher Shuman as saying. The ice shelf has been losing 0.6 square miles of mass per day for around two years, much more than was being shed before then.

These ice platforms on the ocean act as plugs so that inland ice does not advance rapidly, so we will have to see how the speed of that loss increases

Fernando Bohoyo, polar scientist at the Geological and Mining Institute of Spain

At the beginning of March, the shelf in front of the Glenzer Glacier calved an iceberg of around 56 square miles in size, disconnecting the shelf from Bowman Island. No longer anchored to land, the entirety of the ice shelf was destabilized, a situation exacerbated by the heatwave that arrived in the area a few days later. Fernando Bohoyo, a polar scientist at the Geological and Mining Institute of Spain and a specialist in ocean currents, points out that in this area “it has already been detected that surface water temperatures are rising; by circulating underneath the floating ice that comes out through the glaciers from the polar ice cap, it destabilizes it until it eventually breaks its anchors, which is what happened here.”

Researchers are extremely concerned because this represents the first time that a collapse of this magnitude has taken place on one of the ice shelves in the eastern Antarctic, although there have been incidents on a similar scale on the western side of the continent. The most significant of these occurred on the Larsen Ice Shelf in the Weddell Sea and the largest in Antarctica, originally covering an area of 33,000 square miles. In 1995, the smallest segment, Larsen A, collapsed and in 2002 the larger Larsen B collapsed. A large section of the Larsen C shelf collapsed in 2017, forming a massive 2,200 square-mile iceberg known as A-68. As of April, 2021, after years adrift in the South Atlantic, there was nothing left of it. “These ice platforms on the ocean act as plugs so that inland ice does not advance rapidly, so we will have to see how the speed of that loss increases. As it is interior ice, not sea ice, it contributes to the increase of net sea level rise,” says Bohoyo.

“Point of no return”

Even though the Conger Ice Shelf and its glaciers are relatively small, the location of the collapse makes the incident stand out. “All previous collapses have taken place in the western Antarctic, not in the eastern Antarctic, which until recently was believed to relatively stable,” Catherine Walker of the Woods Hole Oceanographic Institution and NASA said in a statement. “This is a bit like a dress rehearsal of what we can expect from other, larger ice shelves if they continue to melt and destabilize. Then we really will be beyond the point of no return in terms of halting sea-level rise.”

Previous studies have indicated that almost 75% of the Antarctic ice shelves across the entire continent have retreated over the last 50 years and if global warming reaches a level of 2ºC above the pre-industrial era and this increase is prolonged over time, much of the ice in this huge area of the eastern Antarctic will melt, which alone could raise global sea levels by as much as 53 meters.