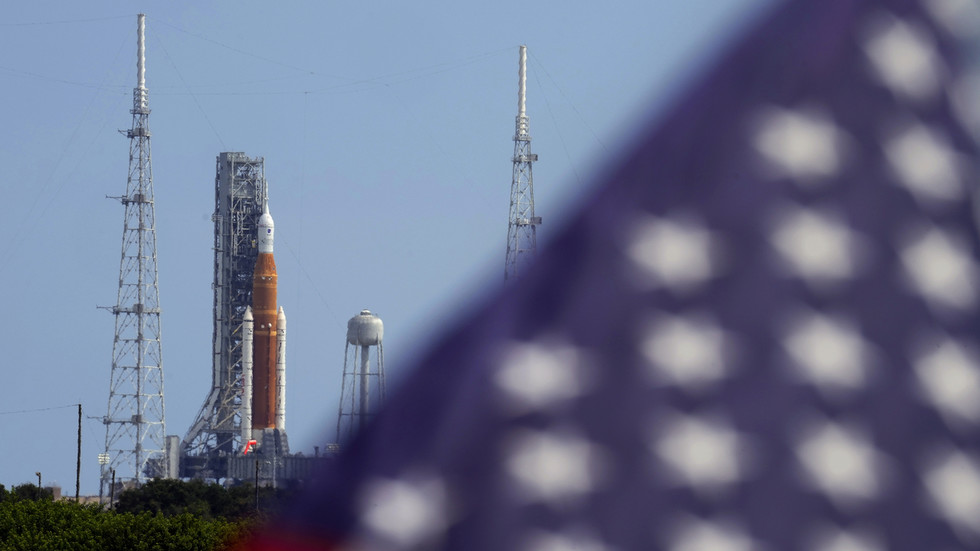 A fuel leak has forced NASA to call off the Saturday attempt to launch its Space Launch System (SLS) megarocket, for the second time this week. Even if the issue is resolved over the next few days, the agency will likely have to postpone the long-awaited Artemis 1 moon mission until October.

A hydrogen fuel leak was detected during fueling, some seven hours before the planned liftoff, and the engineers made multiple last minute attempts to fix the problem during the countdown. The launch was eventually scrubbed three hours before the takeoff scheduled for 2:17pm EDT (6:17pm GMT).

“During today’s launch attempt, engineers saw a leak in a cavity between the ground side and rocket side plates surrounding an 8-inch line used to fill and drain liquid hydrogen from the SLS rocket. Three attempts at reseating the seal were unsuccessful,” the space officials explained in a press release.

The space agency initially said there was still a 90-minute launch window on Monday, and an even briefer 24-minute opportunity for another attempt on Tuesday. However, it later annoucned that the “mission managers met and decided they will forego additional launch attempts in early September.”

The engineers have yet to decide whether to try and replace the seal at the pad, or inside the Vehicle Assembly Building. However, due to safety regulations, NASA will be forced to haul the rocket back into the hangar anyways, to reset the batteries of the flight termination system, unless granted a waiver. While the agency has yet to anounce any dates, the launch is unlikely to happen until after the SpaceX Crew-5 mission to the International Scape Station in late October.

Assuming NASA needs to return the Artemis 1 moon rocket to the Vehicle Assembly Building, the launch will likely be delayed to the following series of launch dates — Launch Period 27 — starting Oct. 17.Here are the dates & times for Launch Period 27.https://t.co/J3lGTTJQF3pic.twitter.com/AVWttZ49Ij

“We’ll go when it’s ready,” NASA Administrator Bill Nelson said on Saturday afternoon, commenting on the latest delay. “We don’t go until then, and especially now on a test flight… This is part of the space business.”

The uncrewed Artemis 1 mission was originally meant to lift off on Monday, but a similar hydrogen leak issue, that time in one of the rocket’s four liquid fuel engines, was detected just hours before launch, forcing a delay.

The Artemis program is an ambitious project by the American space agency focused on lunar exploration and eventually bringing humans back to the Moon’s surface for the first time in over 50 years. The first mission is supposed to be a trial run to fly test dummies to a lunar orbit before returning to Earth. However, US astronauts are expected to step foot there no sooner than in 2025.