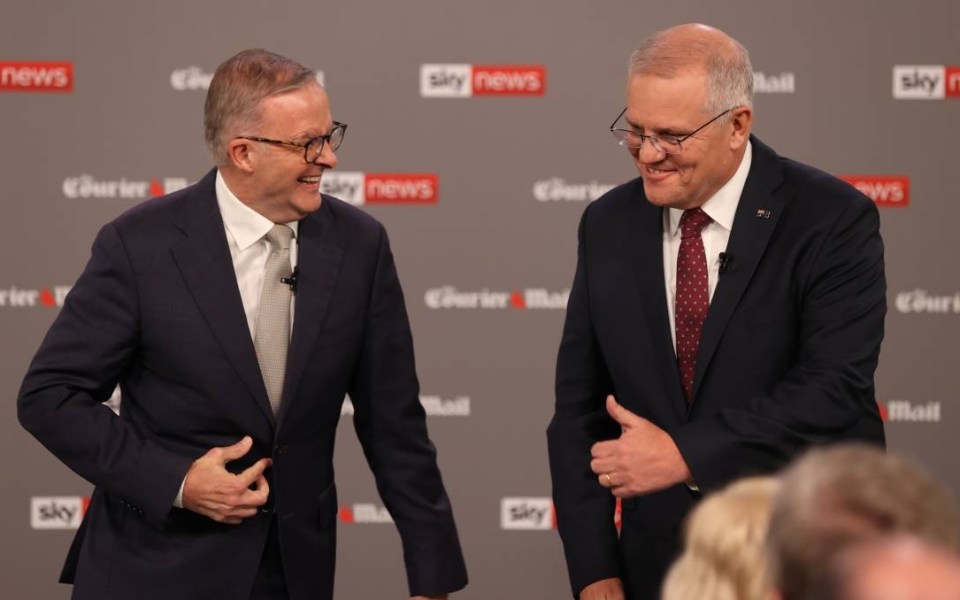 Prime Minister Scott Morrison questioning if Labor was loyal to China prompted the most heated exchange in a pre-election leaders debate that saw Opposition Leader Anthony Albanese outpoint the PM.

Mr Albanese landed no killer blow but countered attempts by Mr Morrison to lure him into a debate on home affairs policy and worked his advantages on COVID-19 management, a federal anti-corruption commission and Pacific security.

In the end, the Sky News “People’s Forum” in Brisbane was always about the wisdom of the undecided voter.

Although he charged hard on national security, the Prime Minister seemed less energised trying to talk up his economic record.

“Our strong economic plan has been delivering,” Mr Morrison said.

“Our strong economic plan is getting people off welfare into work, about helping Australians realise their big aspirations”.

Mr Morrison acknowledged the national debt had blown out under his watch but said the government had overseen a $100 billion turnaround in addition to falling unemployment.

Mr Albanese characterised the government as dithering instead of pursuing any substantial reforms.

‘You have to shape the future’

“The problem with this government is that it’s just treading water, not pursuing any significant economic, social or environmental reforms,” Mr Albanese said.

His glib but effective framing of the government’s economic record was Mr Albanese boxing clever on Wednesday and distracting from Coalition messages on the subject it has used to persuade more voters than any other.

The Labor leader conceded pandemic spending was necessary but said he objected to wasteful measures, such as $1 billion spent on government advertising.

He then lamented voters’ “disillusionment” with national politics before reminding them he had recently promised to legislate a national anti-corruption commission by Christmas.

Mr Morrison spoke to the virtues of his own plan for an integrity commission, which he was criticised for not establishing as promised in the recent Parliament.

The Prime Minister said his plan – widely thought to have been jettisoned – was for a federal commission that was not overbearing.

“It’s not about who your boyfriend is or things like that,” he said, in an apparent reference to the NSW ICAC’s investigation into former NSW premier Gladys Berejiklian.

‘Why would you take China’s side?’

After a day in which the government’s Pacific policy came in for questioning following news that the Solomon Islands had struck a security deal with China, Mr Morrison tried to turn the issue onto Labor with a piece of political judo.

“China is seeking to interfere in the Pacific,” he said.

“Why would you take China’s side?

“The Labor Party, rather than acknowledging what is happening, [instead somehow says] it’s Australia’s fault.”

The Labor leader again suggested the government had been caught napping on Beijing’s military influence and said it had misjudged badly when it sent a “junior burger”, Pacific spokesman Zed Seselja, to Honiara for crisis talks.

In contrast, the US sent Asia policy tsar and former assistant secretary of state Kurt Campbell.

The Prime Minister accused Mr Albanese of being inconsistent on the policy of turning around boat arrivals to Australia.

“So you were going to do turn backs?,” Mr Morrison asked, of decisions taken under Kevin Rudd’s government in 2013.

Mr Albanese conceded that he previously did not support the policy but said he would continue it in government if elected.

Debate questions were put forward by the audience.

And it was Mr Albanese who proved lighter on his feet.

It has only been a week since some journalists questioned if his election campaign was terminal.