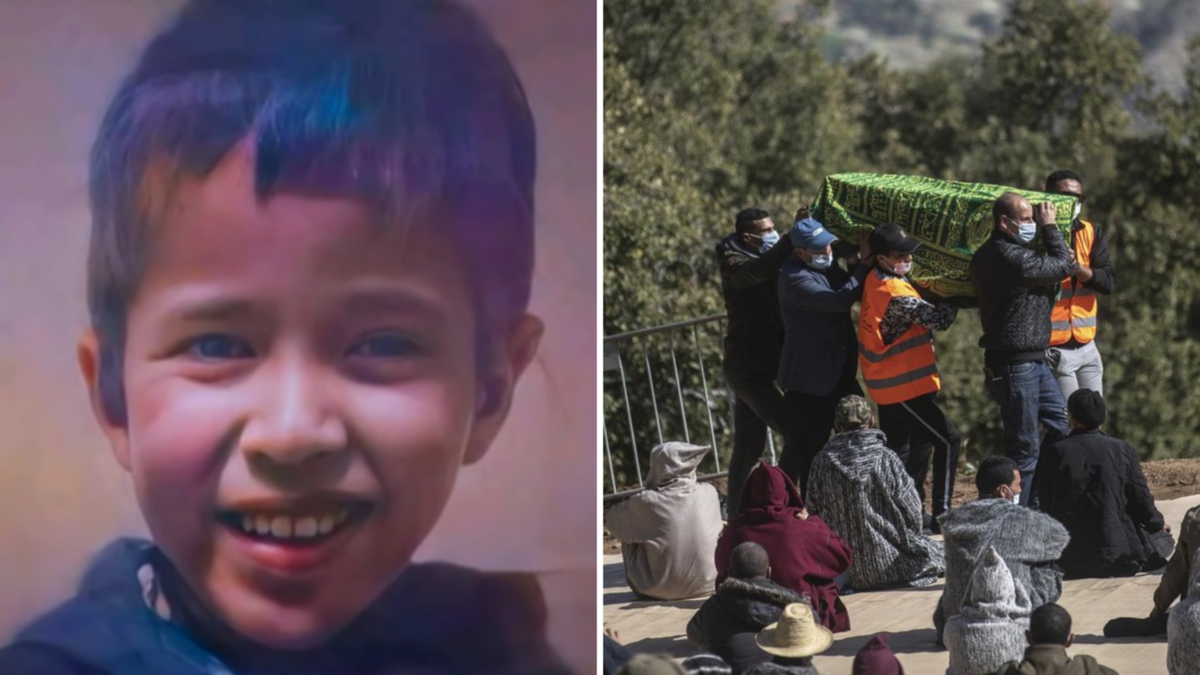 Morocco has buried Rayan, a boy who was trapped in a well for five days while rescuers struggled to reach him.

The strenuous operation drew global attention, and mourners sent messages of condolences from around the world.

Watch the hundreds of people mourn Rayan in the video above

The funeral on Monday for Rayan – who was pulled out on Saturday from a 32-metre deep dry well – was fraught with emotion, and drew relatives and others from near and far who shared their grief.

As the ambulance arrived at the gravesite with the boy’s body, religious chants rose up: “Rayan is our beloved.”

His father could barely walk as he approached, solemnly observing the coffin being lowered into the grave, then covered with soil and tree branches.

The funeral took place after noontime prayers in Ighran, a village in Morocco’s mountainous north.

The boy was laid to rest in a plot where other family members are buried at the hilltop Zawiya cemetery, six kilometres away from the village.

Scores of mourners from around Morocco flocked to the funeral to pay their respects.

A nine-year-old cousin, Illilas, said he misses Rayan dearly. Asked what he remembers most, Illilas recalled Rayan’s love for playing soccer, and said, “he behaved like a grown man. He always asked us to refer to him as “Si Rayan,” or Mr. Rayan.

In a sign of how Rayan’s fate had gripped the country, Moroccan King Mohammed VI followed the painstaking rescue efforts closely, and expressed his condolences to the boy’s parents in a statement released by the palace.

The US State Department also issued a statement on the boy’s death, paying tribute to the “heroic” rescue attempt.

“Like millions around the world, we were awed by the dedication of the rescue team and the solidarity of the Moroccan people as they held out hope for Rayan’s survival,” a spokesperson said.

Security officers ringed the area of the funeral. Villagers came to visit the parents’ house to pay their condolences, and two large tents were set up in front of the modest house, serving breakfast to visitors.

Workers started filling in the massive hole and tunnel that they had dug to try to rescue the boy.

The exact circumstances of how he fell in the well are unclear. The village of about 500 people is dotted with deep wells, many used for irrigating the cannabis crop that is the main source of income for many in the poor, remote and arid region of Morocco’s Rif Mountains. Most of the wells have protective covers.

Nationwide, Moroccans had taken to social media to offer their hopes for the boy’s survival, using the hashtag #SaveRayan which brought global attention to the rescue efforts.

Rayan “brought all of Morocco, and the world, to us,” said villager Yassine Lahsane. He said he hoped the attention would bring about positive change to the region, starting with paved roads.

Local residents believe faster, easier access to the remote village could have sped up the protracted and ultimately fruitless efforts to save the boy.