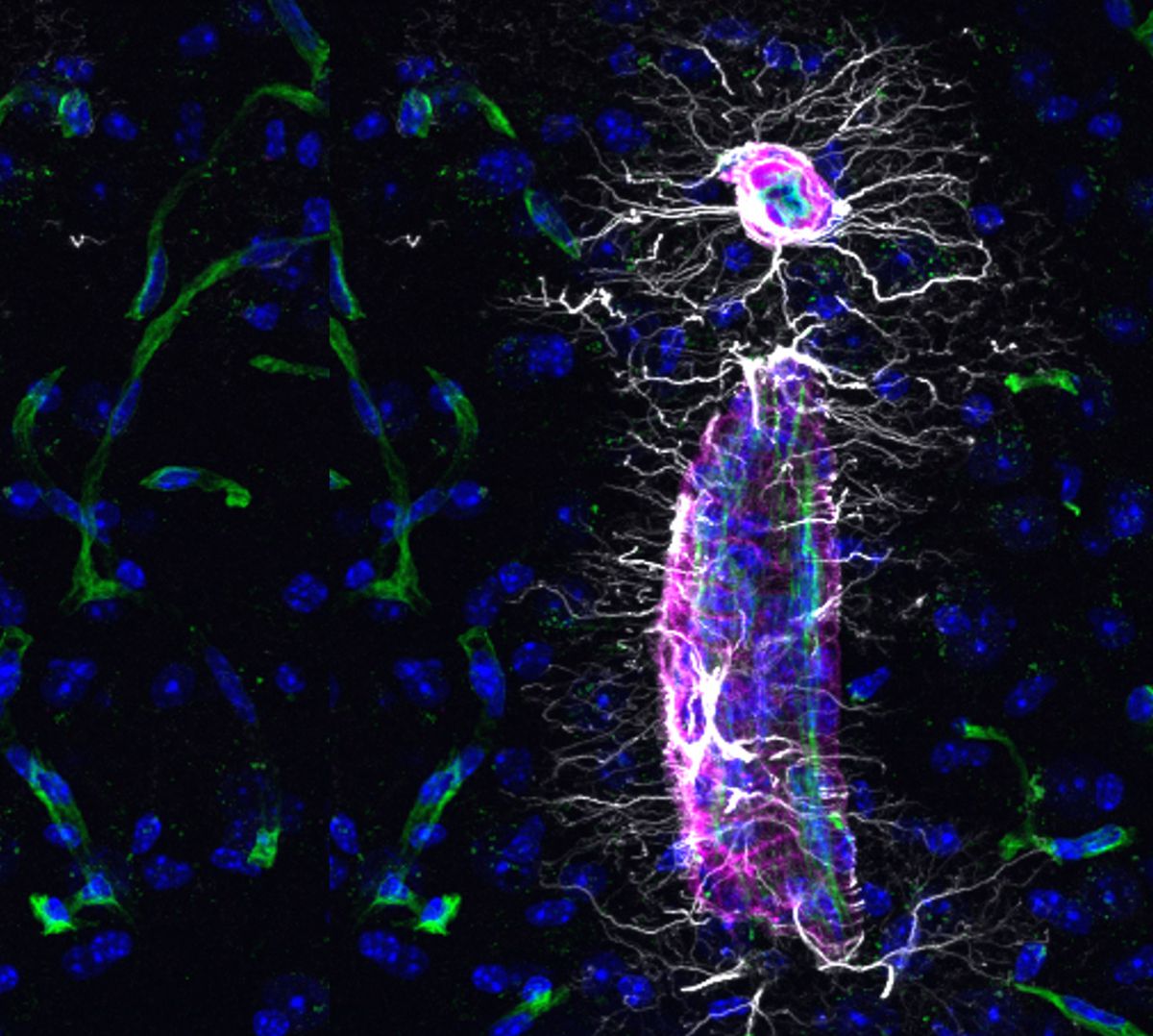 Researchers in the United States have found a molecule that rejuvenates aging brains and helps with the recovery of memory. While this is a preliminary finding that has only been observed in mice, it is providing new hope in the search for a cure to Alzheimer’s, a still-incurable disease that affects people across the world.

The search for treatment against this neurodegenerative disease is one of the most difficult objectives of biomedicine. The human brain is made up of 100 billion neurons that form some 100 trillion connections with each other. The best and the worst of the human mind come from the organ, which weighs barely a kilo and a half. Alzheimer’s is called the silent epidemic because it begins to kill neurons in the brain about 20 years before the first symptoms appear, such as the loss of memories stored in brain cells. By the time this happens, it is impossible to stop its progression. No experimental treatment has been able to reverse the disease. Not even its causes are clear. In this context, every new discovery that can help regenerate aging brains is worthy of attention.

The new study is inspired by something that many doctors and scientists have known for decades: the body’s organs have the ability to regenerate, but with age, the body begins to produce molecules that hinder or nullify this ability. Laboratory experiments have shown that something called parabiosis – surgically combining an old and a young rat together, for example – is enough to improve muscle strength, the proper functioning of the liver and reverse obesity.

A few years ago, following the idea of parabiosis but with less invasive methods, neurologist Tony Wyss-Coray and his team demonstrated that old mice recover memory and cognitive capacity after a simple injection of blood plasma extracted from young mice. This proved that two types of molecules run through the blood: some are in the young plasma and activate tissue regeneration and others are present in the plasma of old mice and prevent this renewal. Some of these plasma molecules are now being tested in clinical trials with people who suffer from mild-to-moderate Alzheimer’s disease. The first results reported by the US company Alkahest and its Spanish partner Grifols are encouraging, although it has not yet been demonstrated that the disease can be slowed down or cured.

Now a new study, published in Nature on Wednesday, has put a twist on the search for new rejuvenating molecules. The team of researchers, which includes Wyss-Coray, replaced plasma with cerebrospinal fluid, the clear, colorless substance that bathes the nervous system and brain and exchanges molecules with them. The researchers extracted this fluid from two-and-a-half-month-old mice – the equivalent to nine human years – and injected it into the brains of 18-month-old mice – the equivalent to 70 years. They then tested the memory of these elderly mice, which under normal conditions had been unable to remember a simple sequence of events: a light is turned on and they suffer a small electric shock. The rodents that received the brain fluid began to become alert when the light bulb was turned on. They had recovered their memory.

There is a huge gulf between a mouse that is terrified because it foresees an electric shock and a person who is unable to recognize his child due to Alzheimer’s disease, but possibly the same biological mechanisms are at work. The scientists analyzed the brains of these animals and found that new oligodendrocytes, a type of cell that makes up the white matter of the brain and supports the gray matter where the neurons are located, had begun to regenerate. These cells produce proteins that form a protective cable for axons, the projection of a nerve cell that is received by other neurons and can measure up to one meter in length. The study shows that these new oligodendrocytes were produced in the hippocampus, the brain’s epicenter of memory. Researchers also injected cerebrospinal fluid from young people into old mice and recorded a similar rejuvenating effect. In contrast, the same fluid from older people reduced cell regeneration capacity.

The scientists identified a protein in young cerebrospinal fluid called Fgf17 – short for fibroblast growth factor 17 – that is capable of activating the production of young oligodendrocytes on its own. This protein “is necessary for the formation of the brain during embryonic development, but almost nothing is known about its production and function in the brains of adults and older people,” explains Tal Iram, a researcher at Stanford University in the US and the lead author of the study. “Oligodendrocytes are unique because their progenitors are still present in the brain at advanced ages, although their maturation is very slow. Our study suggests that manipulating cerebrospinal fluid proteins can rejuvenate these cells and improve memory in aging brains,” she says.

Miriam Zawadzki and Maria Lehtinen, pathologists at Boston Children’s Hospital, describe the new study as “groundbreaking.” “The Fgf17 protein is a possible therapeutic target and also suggests that delivering drugs to the cerebrospinal fluid may be beneficial against dementia [caused by Alzheimer’s in 80% of cases],” they say in a commentary on the study.

Three independent experts highlight the originality of the work and its value in furthering knowledge on neurodegenerative diseases. Alzheimer’s has been cured in mice countless times, but we still do not have a single cure for people, recalls Jesús Ávila, a veteran researcher of this disease at the Severo Ochoa Molecular Biology Center in Spain. “We still don’t know why this is happening,” he says. Part of the explanation may lie in the fact that mice and humans have been evolving separately for millions of years. The tau protein, which is associated with Alzheimer’s, accumulates inside neurons, preventing them from functioning properly. Ávila’s team has discovered an alternative form of this protein that does not contribute to the disease and exists only in humans, as neither mice nor primates have the genetic variants needed to make it. It is possible that there are many other similar differences that we do not yet know about, says the researcher.

Carlos Dotti researches brain aging at the same center as Ávila. This work is “important because it shows that memory can be recovered,” he says. The problem is that the Fgf17 protein and the molecular mechanism in which it is involved not only generates new brain cells, but by promoting growth it could also generate tumors, he warns. “In any case, this opens up a very good avenue to search for other proteins with therapeutic potential in the cerebrospinal fluid,” he adds.

One of the big problems in the search for a cure for Alzheimer’s is that the brain is isolated from the rest of the body by a strong immunological and hematological barrier that makes it very difficult to deliver drugs to it. Using cerebrospinal fluid can also entail difficulties, since it is extracted by a needle inserted in the lower back that goes through the spinal column until it reaches the nervous system. One option to avoid this operation would be to use subcutaneous pumps like those already implanted in the back to inject morphine into the cerebrospinal fluid to relieve chronic pain, argues Iram. Her team is already considering how their findings can be applied in the search for a treatment for Alzheimer’s, but they acknowledge that they still have some research time ahead of them.

Eva Carro, an expert in Alzheimer’s neurobiology at the Carlos III Research Institute in Spain, is skeptical that this type of treatment is possible as transfusion of cerebrospinal fluid is “very invasive.” The expert believes that prevention is the best way to fight against Alzheimer’s. “It is the same thing that has been done and continues to be done with cardiovascular diseases; reducing or eliminating modifiable risk factors such as high-calorie diets, sedentary lifestyles, hypertension, diabetes, stress, depression, and promoting protective factors such as sleep, socialization and physical activity,” she explains. Factors such as these may be responsible for a surprising trend drug: the incidence of Alzheimer’s in Europe and the US is 13% lower with each passing decade.