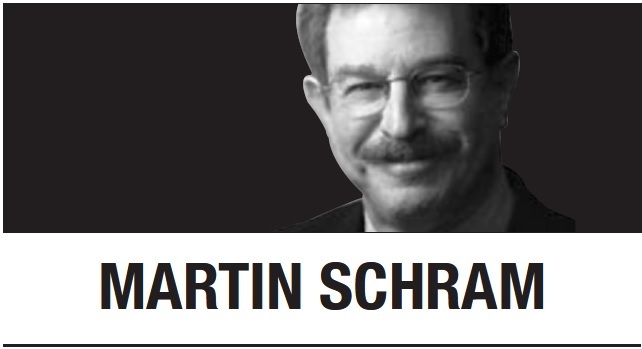 We’re in Mexicantown, a neighborhood in the 27th-largest city in the USA. We’ve just had a bite to eat at Los Galanes, the restaurant we chose over Xochimilco, which is nearby. Now our car is heading south, on this fine February day, so we can drive over the bridge and across the border.

Uh-oh — we’re in a helluva traffic jam. Lots of huge trucks. Tiny cars trapped in between. No one is moving. Across the bridge, we can see the country we’re trying to drive to. Just can’t get there.

Quick Quiz Question No. 1: What country were we trying to get to?

Quick Quiz Question No. 2: What is the topic of today’s column?

Answer No. 1: The country we were trying to get to was, of course, Canada. (Long ago, some geographic practical jokers planned things so that, when you’re in Detroit and want to get to the huge sprawling land mass that is famously known as our northern neighbor, you actually have to drive south across the Detroit River to get there. And just before you drive south to Canada, you go through a neighborhood called “Mexicantown.” Really.)

Answer No. 2: So now you’re thinking, well I guess this can’t be another of those ho-hum Mexican-border-crisis columns. And you’re so right. It’s about the one thought that was clogging those Make America Great Again Trump truckers’ gray cells as they chose our pandemic-created global shipping crisis to stage their slo-mo protest of vaccine mandates and other COVID-fighting restrictions.

While European countries have vaccination and booster rates in the 70s and even 80 percent, the US vaccination rates are back in the mid-60s. On Wednesday, the New York Times ran a front page article warning that in New York City, yet another new COVID-19 omicron subvariant BA.2, has just doubled. And occurrences of fevers (a COVID precursor) have increased to levels that are among the worst we’ve seen.

As I watched those pro-Trump, anti-vaccine mandate truckers early this year, I saw how thrilled they were to hear their hero, Donald Trump, praise them for choosing our pandemic crisis as a perfect time to protest. At a Jan. 29 rally in Texas, Trump had praised the truckers for “doing more to defend American freedom than our own leaders by far.”

While Trump’s huzzah thrilled the truckers, it brought me back, full-cycle, to a win-win pandemic proposal I proposed back in a column last July. It was built around the idea of actually praising Trump for his blip of presidential leadership — as a way of promoting a new MAGA Vax approach that could have helped us curb our still-horrid cycle of COVID variant creations.

It only required President Joe Biden to do something genuinely selfless to try to bring together not only Trump but even Trumpers like those truckers — for a cause that is greater than 21st century hate politics.

Trump had bragged (but this time with validity!) that his Operation Warp Speed had created three vaccines “to end the pandemic in record time.” He also once told a group of big givers he invited to Mar-a-Lago that he thinks all three of the vaccines should be named the “Trumpcine.”

So I borrowed Trump’s idea. In July 2021, I proposed: “Biden really announces that from now on he’ll be calling all three the ‘Trump Vaccines.’” I made the case that if Biden puts Trump’s name at the head of America’s vaccine public relations parade, it could convince the pro-Trump vaccine rejecters to boost US vax numbers in a big way.

Now, a group of respected US academics have done a most unique study that has proven that idea actually works — big time. (I also want to reveal the source who tipped me to this creative study: I read it in a column by the New York Times’ Ross Douthat; then I obtained a copy of it.) University academics — from Stanford, North Carolina State, North Carolina and California — created a 27-second vaccine video commercial featuring news clips of Trump on Fox News programming, urging people to get vaccinated. The ads ran 11.6 million times on YouTube’s Google Ads platform and were viewed by 6 million people — in counties with very low vaccination rates.

The results, “The campaign increased the number of vaccines in the average treated county by 104,” the study reported — totaling an increase of 104,036 vaccines over 1,014 selected counties.

“We find that positioning Donald Trump as a counterintuitive messenger is a cost effective way to overcome hesitancy among people who still had not been vaccinated, months after the vaccines became widely available,” the study concluded.

Last July, I wrote that naming the vaccine after Trump “would be Biden’s best chance to save Americans from dying.” It still is.