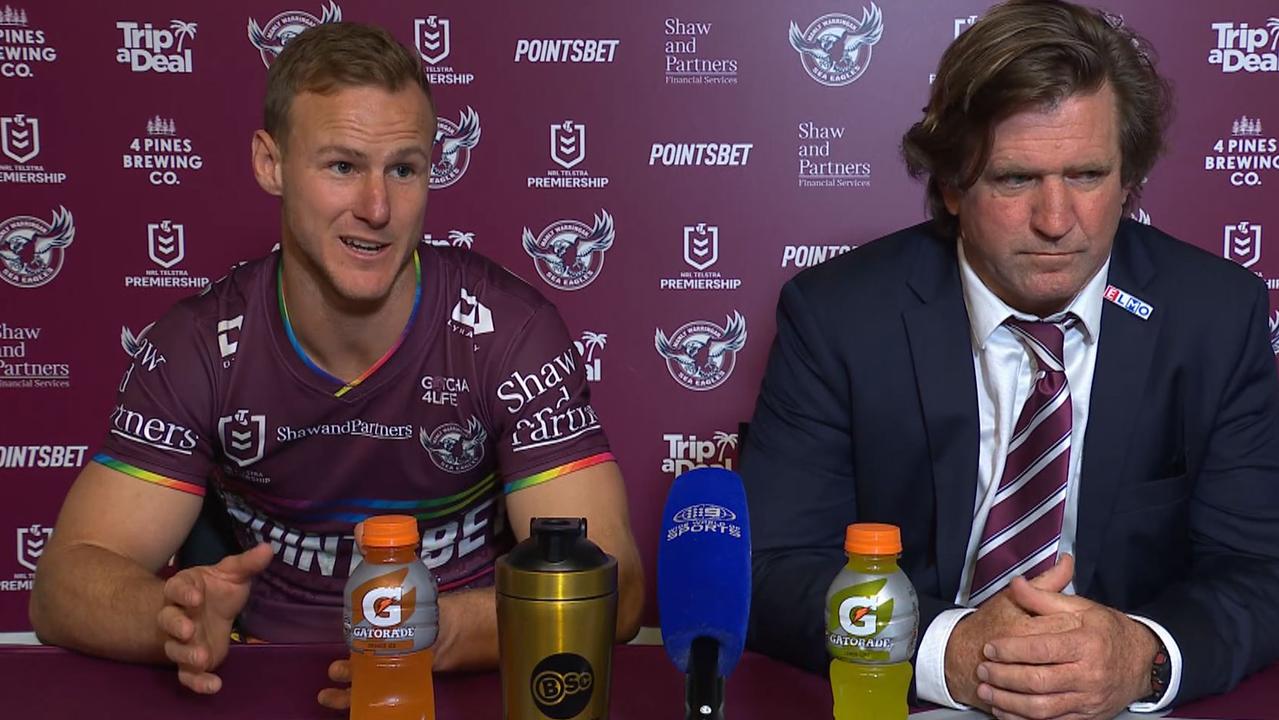 Manly coach Des Hasler admitted his team has work to do to overcome the pride jersey scandal while captain Daly Cherry-Evans issued a warning about putting players in awkward positions after the club’s week was derailed by off-field headlines.

Seven Sea Eagles players boycotted Thursday night’s match against the Roosters after refusing to wear a specially-designed pride jersey, featuring rainbow piping. A severely depleted Manly side was incredibly brave given the lack of manpower but still went down 20-10 at home.

Asked post-match if the club was united, Hasler’s response was telling.

“Yes and we’ve got a bit of work to do,” he told reporters, revealing the week was “emotional on different aspects”.

“I’m just being honest, we’ve got a bit of work to do.

“But as long as we’re all sympathetic to each other’s cause, we’ll get there.”

Pressed further on whether he was referring to “work” on the football side of things or something greater, Hasler added: “Everything.”

There have been suggestions the pride jersey controversy could cause disharmony within the Manly dressing room, especially at such a crucial time of the season. Fighting desperately to make the finals, Thursday’s 10-point defeat could come back to haunt the Sea Eagles, who sit one spot outside the top eight — level on points with Canberra and the Dragons, who both have games to come this weekend.

Cherry-Evans said he was proud of his teammates’ effort on Thursday night and hoped the fans would be too after such a tough week. Most expected Manly — forced to blood several debutants — to concede a cricket score against the Roosters, but they didn’t let the Tricolours run away with things.

Asked after the match about the changing nature of the sporting landscape and whether codes would be promoting more off-field messages in future, Cherry-Evans issued a warning to NRL bosses and clubs about trying to “make” players promote certain causes.

“I’d like to answer that. As a player I think we need to be really careful about how much we push onto the players to commercialise the game,” he said.

“If you look at a dressing room as an NRL squad, it is very diverse and it is very inclusive so I just wonder how much we need to do as athletes, I guess, to push out there.

“Because we already are a lot of things of what we’re trying to represent and what the club tries to make you represent. At some stage we have to understand that sport is pretty inclusive. It’s not perfect and it does have boundaries but I know from my time in the game it does represent a lot of the things we’re talking about tonight.

“But unfortunately when people get put in a position to have to do something they don’t want to do, then I think that’s when you see positions like tonight.”

Cherry-Evans added it was important to respect where the seven players who stood down from the game were coming from, as the pride jersey issue split the rugby league world this week.

While Hasler hinted the club has some ground to make up to become fully united, the Queensland captain is hopeful the saga will bring the playing group closer together.

“I think it’s really important for us to understand where everyone comes from,” Cherry-Evans said.

“For us to play in this jersey, how can we not go in there and understand and accept what people have done if we’re out here trying to represent inclusiveness and diversity?

“It’s not easy. As Des said there’s human emotion in this but it could bring us together like never before.

“This can be a chance for us to come together and understand a bit more about each other and learn from it and move on.”