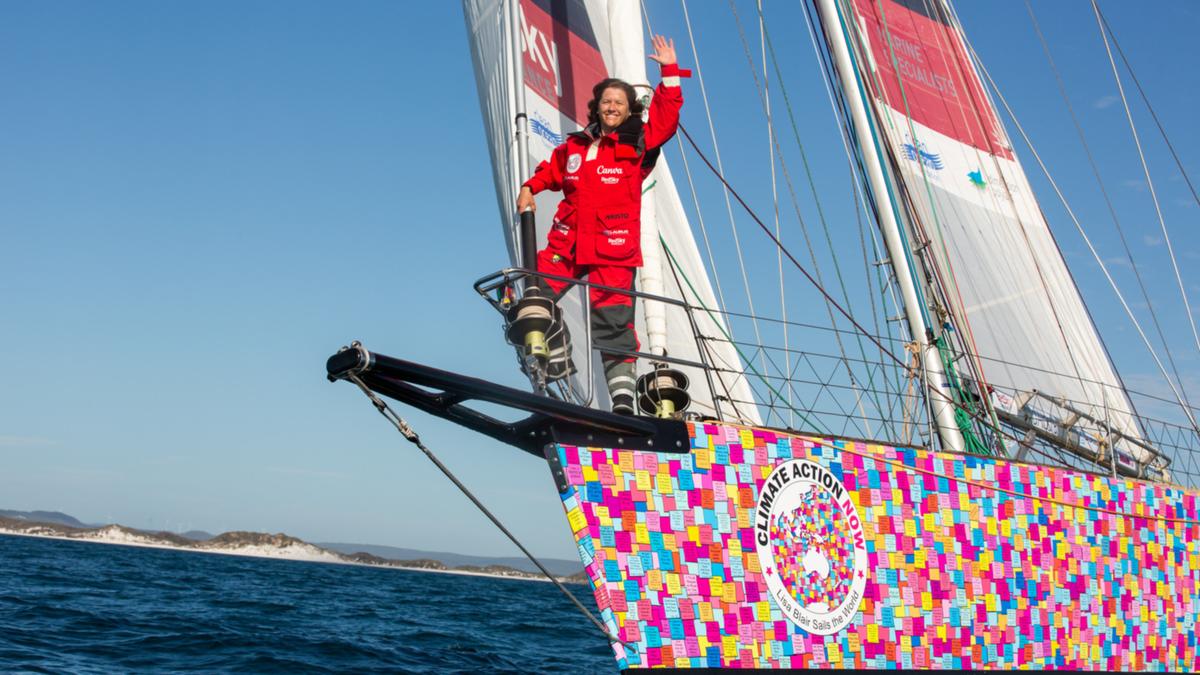 For the past 26 days, Lisa Blair has been surrounded by nothing but ocean.

In that time, the 37-year-old Sydney woman hasn’t seen another human being – not even a ship sailing in the distance.

WATCH IN THE VIDEO ABOVE: Lisa’s Day 23 update

Her only companion is her 15-metre sailing boat – Climate Action Now.

Ms Blair, who set the world record when she became the first female to sail solo and unassisted around Antarctica in 2017, is now attempting a second world record.

She wants to sail around Antarctica solo, non-stop and unassisted in 90 days.

Her trip was delayed for several reasons including unfavourable weather, but she’s already tackled her first storm and is loving life back on the water.

“It was a struggle to get to the start line the entire way along,” Ms Blair told 7NEWS.com.au from the middle of the Southern Ocean.

“So I didn’t really get much of a chance to appreciate that I was leaving for three months, or that I was going to be on a boat on my own in the middle of the Southern Ocean again.

“I was just so focused on all the preparation.”

Now, after 26 days at sea, Ms Blair hasn’t seen “land or another boat or anything”.

“So it’s given me time to reflect and enjoy the fact that now I’m here.

“I do definitely have moments – feeling clean and having a daily shower is not happening at the moment.

“So things like that I definitely miss but it’s part of the journey.

“I’m very conscious that I’ll be isolated for three months or more.

“I have those moments where I’m like, ‘Oh it would be really nice to sleep in a bed that’s not rocking and rolling from side to side’ or ‘to get a full eight hours uninterrupted sleep would be wonderful right now’.

“But those things will come when I finish this record, so I wish for them but I can do without them for a short while.”

Life on the water

While it may sound like Ms Blair has lots of time on her hands, the boat keeps her incredibly busy.

“You do have periods where you get lulls… but more often than not, the boat needs attention generally every hour or hour and a half,” she said.

“You’ve got to change the sales or trim them or you’ve got to model for the weather or maybe you’re repairing something.

“On top of that, you’re so sleep deprived [for] the entire record [attempt time] so any downtime you do get, you’re generally trying to sleep a little bit.”

Ms Blair operates on a high level of fatigue – the toll the trip takes on her mental and physical state is incredible.

When she’s close to known hazards, she sleeps in 20-minute increments for five or six hour blocks.

“When I get further afield into the wide open spaces around Antarctica, there’s pretty much no one down there, so the risk of me having a collision with a vessel is really, really light.

“I would be able to see them on the instruments that I have on board the boat so I can increase my sleep patterns up to about 40 minutes.”

When she’s not sailing, eating, repairing the boat or updating her blog, Ms Blair will try to sleep, or at least rest.

“Just living in that environment is tough,” she said.

“If you’re in storm conditions, you can’t put one foot forward without having to hold on with almost all of your strength at times just to move around the boat – let alone cook dinner, go to the toilet, go up on deck.

“Everything becomes a workout.

“So you’ve got to give your body quite a lot of rest and recovery in those conditions to be able to push through.

“And you never quite know when the next emergency is going to occur so you’re always of buffering for that.”

For food, Ms Blair has provisioned for three to four months at sea – mostly freeze-dried.

“You add a cup of boiling water to it, mix it up and dinner is served.”

Seventy-two days into her previous voyage – when she was three quarters of the way around Antarctica, almost 2000km from land – Ms Blair suffered a significant ‘demasting’ during a storm which almost ended her life.

“It’s such an interesting experience to have, because you are so alone out there,” she siad.

“At times when I sail through places like Point Nemo, I’m closer to astronauts in space than people on land.

“And you go into a storm system or into a large swell like that, and it’s like waves the size of houses all around you.

“You get all these peaks and valleys.

“It is one of the most incredible things to see because you’re witnessing the power of mother nature in its most raw, volatile form.

“And not only are you seeing it, you are living in it and you’re surviving in it.

“There were times last time where I was cranking my neck back to look up at a 10- to 15-metre wave and looking at it and [thinking] ‘this wave’s going to wipe me out. There’s no way I can survive this.’

“Then the boat somehow goes up and over it and it’s like a breath of fresh air.

During the last trip, Ms Blair managed to save her boat and made her way to Cape Town, South Africa, before restarting her voyage.

When she made it back to Australia in 2017, it took several months for her to readjust to life back on land.

“It is a shock,” Ms Blair said of that trip.

“One of the strongest, most unique things I found was the smell of perfume and deodorant. I couldn’t handle it.

“Anyone who had perfume on, I had to stand several metres away from them because my nose had adjusted to just the simple smells of the ocean, and all the smells on land were too much.”

It’s taken years for her to recover from the trauma of that trip.

And while she’s comfortable on the water, it’s the “one per cent unknown factor” that scares her.

Besides aiming to break the record again, Ms Blair’s trip this time will be a little more complicated.

She has partnered with a number of scientific organisations keen to understand more about the remote part of the world.

“There’s not a lot of data in microplastics sampling in the Southern Ocean at all, let alone a complete circumnavigation,” she said, listing off a number of planned experiments.

“For me to be able to deliver that, as an additional benefit of my campaign to our scientific community, is one of the big driving factors.”

Another driving force is the climate action message of her campaign.

“Instead of just being me sailing the boat solo around Antarctica, I’m actually carrying hundreds and hundreds of actions from the community,” she said.

“The intention is to show people that as an individual, we all have the power to create change.

“It just starts with one action, one initiative. “