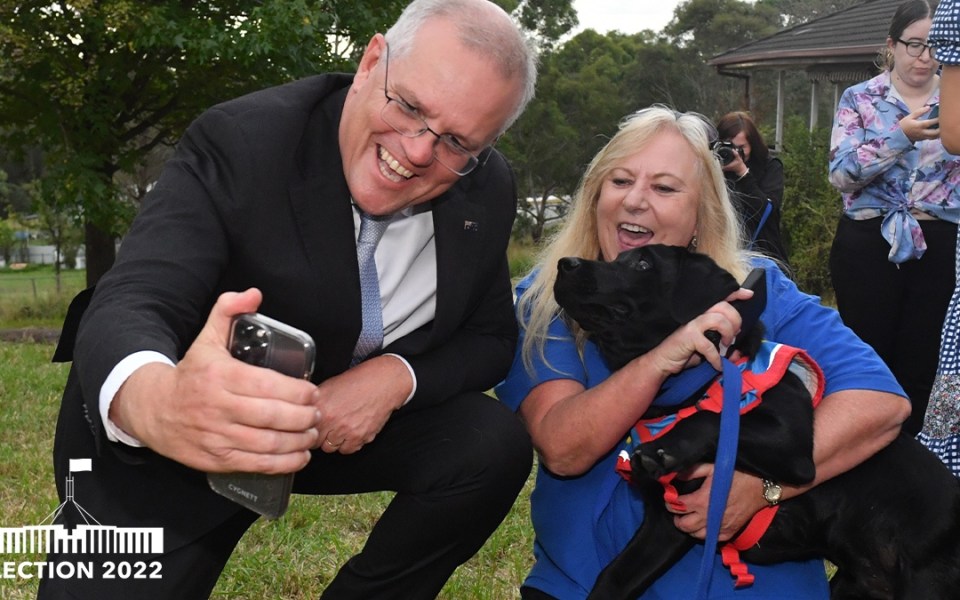 That’s a wrap for week two of election campaigning – and what a week it has been.

The 2022 election is proving to be a battle waged via social media, and the Liberals, Labor and the Greens have again demonstrated they are all hungry for a slice of meme credibility.

Plus, Greens leader Adam Bandt showed his social media followers that he was particularly hungry for a kebab.

Let’s take a look at the biggest election memes that made the rounds this week.

As mentioned last week, election campaigns are often all about shaking hands and holding babies.

But after Prime Minister Scott Morrison struggled to bond with his younger constituents, he’s now moved on to making furry friends.

He’s seeming to be having a ruff time of it so far.

Mr Morrison made a stop at Assistance Dogs Australia in Western Sydney, where he posed for a selfie with a black labrador pup.

But sadly (for the Prime Minister), the dog looked less than impressed to be posing for a selfie, flailing in his minder’s arms.

The Greens immediately jumped on the meme-worthy moment, and let the dog’s expression do all the talking.

“Dogs are the best judge of character,” they captioned the post.

The Prime Minister’s selfie is yet to pop up on his social media feed, but we can only dream of what the photo would look like from his phone’s perspective.

The dog drama didn’t stop there for the Liberal Party.

Treasurer Josh Frydenberg caused a stir in his seat of Kooyong this week when he released flyers with endorsements from two charity directors – one from the Inclusion Foundation, and the other from Guide Dogs Australia.

The flyers immediately went viral on social media  – with Guide Dogs Australia eventually launching an internal investigation into whether its chief executive, Karen Hayes, had breached regulations requiring charitable organisations to be non-partisan.

Political meme accounts were quick to flip around the content of the flyers.

The Facebook account ‘PrimeChinister’ not only superimposed Mr Frydenberg’s head onto the dog’s body, but managed to switch up all of the text on the flyer.

They even renamed the Treasurer ‘Josh Frydendog’.

There’s nothing particularly funny about a COVID-19 diagnosis.

But you have to admit – ‘Alba-sneezy’ is an undeniably clever observation.

When the Labor leader confirmed on Thursday night that he had tested positive for coronavirus in a routine PCR test, the phrase almost immediately began trending.

Twitter users briefly applauded the clever hashtag – before it was seized upon by the papers, and the meme quickly died from there.

Anyone for a kebab?

Greens leader Adam Bandt was on a mission this week to continue his meme-ability from the first week of the campaign.

Mr Bandt, who has long supported cannabis legalisation, checked in on social media to celebrate April 20

“How good are kebabs?” Mr Bandt tweeted, at 4:20pm exactly, kebab in hand.

Counting down the days

Memes really do come in all shapes and sizes.

One meme aficionado created a Facebook event counting down the days until election day, and it has garnered quite an enthusiastic response on the platform.

Titled ‘Scomo’s Farewell Party’, a whopping 21,100 people have responded to the event.

Where will this ‘party’ be taking place, you may ask? None other than the Engadine McDonalds.

Learn more about the significance of the location here.

A comical push has emerged for an Australian legend to throw his Akubra hat into the ring for the federal election.

The Facebook page ‘Russell Coight Memes’ is calling for the fictional Aussie explorer to nominate himself as the Labor candidate for the seat of Lingiari.

Although we can be almost certain Rusty won’t be joining the election contest, we’ll update you if we hear actor Glenn Robbins is at all interested.