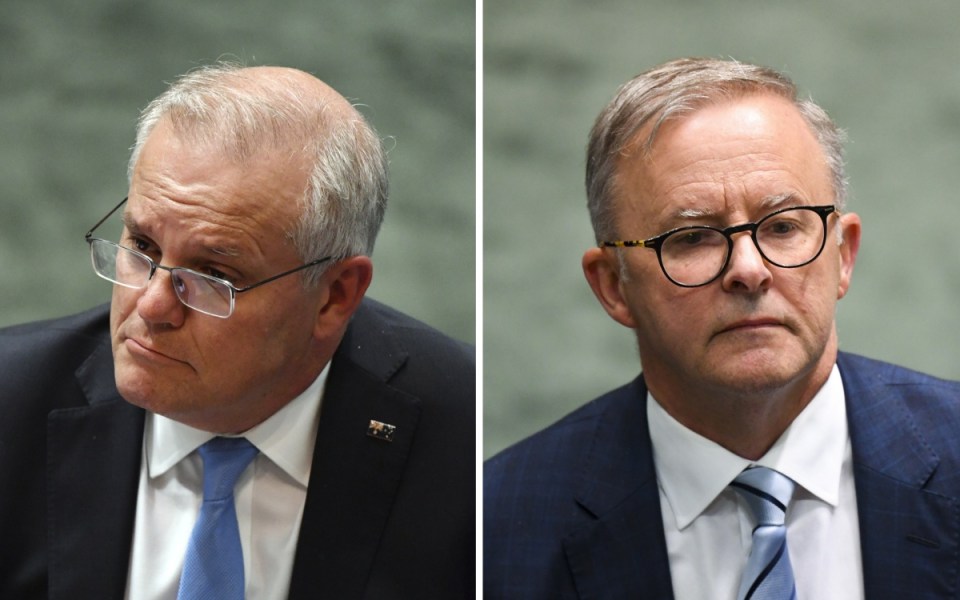 Labor maintained its strong overall lead through the overture to the election campaign beginning this week, but a fall in its primary vote suggests a rising chance of a hung parliament, an exclusive Roy Morgan Poll released on Tuesday finds.

The poll, taken across a week concluding with Scott Morrison’s visit to the Governor-General – a period when unexploded Liberal Party bomblets seemed to set the agenda for the government – shows Labor maintaining a thumping 57-43 two-party preferred lead.

That is a commanding, election-winning lead.

But beneath the surface the Opposition’s support has reconfigured, with voters moving across to minor parties and increasingly saying they were open to backing independents.

Labor’s primary vote is down to 36 per cent, a drop of 3.5 percentage points that walks back last week’s surge nearly entirely.

The Coalition parties’ primary is down by a far less drastic 0.5 percentage points; it now sits on 32.5 per cent.

The drop in support for the major parties has produced an expected increase for the minor parties.

Only votes for independent candidates did not rise.

On a national measure, independent candidates remain at 8.5 per cent after a 0.5 point drop.

But another key poll indicator suggested voters were much more receptive to messages from independent candidates than they had been the week before.

“Overall, nearly a third of Australians, 31.5 per cent (up 4 percentage points on a week ago), said they would vote for a minor party such as the Greens, One Nation or United Australia or an independent,” said Michele Levine, the chief executive officer of Roy Morgan.

The measure suggests voters are significantly more apt to be persuaded by independents than at the last election, as a number mount challenges, especially on government MPs in Coalition heartland in moneyed, inner-urban seats in Melbourne and Sydney.

With six weeks to play out before the May 21 election, the poll figures suggest a trend that, combined with the greater pressure and scrutiny of the campaign trail, could be a worry for Labor.

As many voters will make up their mind during the course of the campaign as went into it having decided, the Australian Election Survey suggests.

And recent history underscores the extent to which time on the campaign trail can determine elections.

Although the government may not have moved the needle with a generous budget and a cut to the fuel tax, Ms Levine says its path to re-election is to win the campaign.

“The LNP starts this campaign well behind on a two-party preferred basis, but they will be heartened by their performance only three years ago in 2019,” she said.

At this point in 2019, the Coalition was also clearly down on the headline vote measure, or five percentage points.

“The LNP picked up a swing of 4 percentage points during the course of the campaign,” Ms Levine said.

“A similar performance by the LNP over the next six weeks would bring the prospect of a hung parliament into view.

“To be sure of gaining a majority the ALP needs to aim for a decisive two-party preferred victory of ALP 53.5 per cent compared with LNP at 46.5 per cent.

“Anything less than a 5 percentage point swing to the ALP at the election could well result in a hung parliament with Greens and Independents forming the crucial voting block in the lower house to determine the election’s winner.”

The government emerged from the first full day of campaigning looking a much stronger outfit on Monday.

ALP leader Anthony Albanese was badly wrong-footed when put on the spot and could not name the current cash and unemployment rates.

The day before, after triggering the contest, Prime Minister Scott Morrison had made a classic appeal to voters’ hesitations about changing government, warning that Mr Albanese and Labor could not be trusted to manage the post-pandemic economy.

Mr Morrison called an early end to the day’s campaign as Coalition campaign headquarters pumped out an attack video making use of Mr Albanese’s comments.

Both leaders opened the batting in key marginal seats.

Mr Morrison was on the New South Wales south coast in the division of Gilmore, a seat that Labor holds by 2.6 percentage points but which is regarded by the government as Coalition territory.

The messy circumstance of an incumbent MP’s resignation and opposition to Mr Morrison’s hand-picked replacement combined against the government last election.

But now it is one of the few seats the government could win this time around, especially with a popular candidate, the former state transport minister and outspoken critic of Mr Morrison on Black Summer bushfires, Andrew Constance.

Mr Albanese was in northern Tasmania in the seat of Bass, which the government won last time but holds only with the slightest of margins of 0.6 percentage points.

Of the past 10 elections, Labor has won Bass six times, which reflects its ultra-marginal status.

Incumbent MP Bridget Archer has had an unusually high profile in the Parliament just ended.

She alleged internal party bullying after not taking the party line on a Commonwealth anti-corruption commission but stuck her neck out again to sink the government’s controversial religious discrimination legislation.

The government is most likely keeping an eye on its existing positions in south and western Sydney or those under challenge from independents in leafier parts.

This Roy Morgan poll is based on a sample of 1384 Australian electors, who are interviewed online and via telephone.