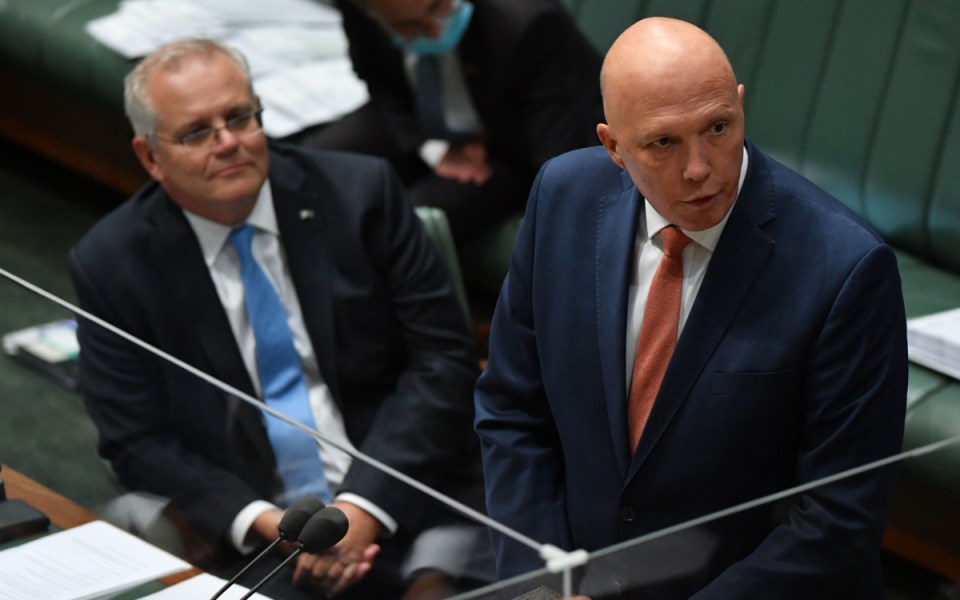 The disaster that has been Australian foreign policy over the past four years is another of the issues that should be central to the election campaign. Instead, politics has turned it into a sideline shadow play.

The Coalition’s over-the-top tactic of branding Labor as China’s stooges and Labor’s small target policy of running as “Liberal-lite” means the Opposition isn’t game to engage meaningfully with our biggest foreign affairs failure and challenge – the relationship with our main economic partner.

Claiming Labor was “very passive” on China was the route predictably taken by the Prime Minister when “quizzed about the decision to send a junior minister, Zed Seselja to the Solomons last week, while Foreign Minister Marise Payne reportedly stayed behind to host a Liberal Party function in Sydney”.

The government seeks to wrap itself in the flag, military uniforms and massive spending on things that go bang to sell itself as strong on “national security”.

It boils down to an expensive camouflage of diplomatic failure that has weakened, not enhanced, our security by making Australia a target.

That is something Labor is not game to take on lest it be seen as “soft on China”. Note that Senator Wong’s latest criticism is aimed at Mr Morrison’s leadership rather than the broader issue.

Achieving nothing after reportedly being warned about a Solomon Islands agreement last year – exact details still unknown – might epitomise the Morrison mob’s lack of diplomatic skills in the South Pacific. Sending a second-rung politician for subsequent talks reinforces that.

In the bigger picture, it can be painted as representing the result of bellicose chest beating for the sake of domestic political ends and Mr Morrison’s extreme desire to ingratiate himself with the Trump administration.

When the Australian government delights in being out in front of the rest of the world in attacking China, when it very expensively ditches French submarines to buy nuclear-powered subs with the explicit goal of being part of a South China Sea cordon sanitaire, an unquestioning arm of US defence policy to sail nuclear battle groups on China’s doorstep, who would guess China might respond by seeking a greater presence on our doorstep?

Given our often patronising treatment and dismissal of our South Pacific neighbours, it’s not surprising China can buy a hearing in the islands. Pacific nations would be mugs not to try to play both sides off against each other now that they are suddenly popular and noticed.

The essential problem though remains the Morrison government’s total inability to engage with China – an unmatched failure.

The United States is the power driving China containment and confrontation, but Washington can still talk to Beijing. Canberra can’t.

And when a new Chinese ambassador to Canberra perhaps extended an olive leaf in seeking to meet our Prime Minister, his request was denied on the grounds of not daring to sacrifice any diplomatic face.

As previously reported here, Max Suich last year wrote the most important piece I’ve seen on the origins and motives for Australia’s botched diplomacy with China.

The one thing the meticulous Mr Suich missed was an important footnote in the escalating failure: It was then-Home Affairs Minister Peter Dutton – not the generally invisible Foreign Affairs Minister Marise Payne – who led the charge in demanding China “come clean” over COVID-19.

The demise of the Department of Foreign Affairs and Trade (DFAT) in guiding our diplomatic efforts, the role taken over by decidedly un-diplomatic security and defence, is a key part of the bigger failure.

The spooks and military ordinance mob have successfully captured much of the mainstream media, their standard anti-China line part of the furniture, more nuanced views regarded as heresy.

Peter Dutton has worn his “Offence” Minister badge as a leadership token. One former ambassador has suggested everything Mr Dutton says is aimed primarily at Mr Morrison.

Labor isn’t game to go near it, but the reality is that the Coalition is incapable of resetting Australia’s relationship with China, is incapable of achieving the same level of dialogue with China as enjoyed by our supposed “Quad” partners and every other country.

For the sake of the noisy and influential local Sinophobes, Labor is going into the election as “me too” on foreign affairs.

It’s the bipartisan approach desired by our spooks, but our diplomats are hoping a change of personnel could result in a return to diplomacy.