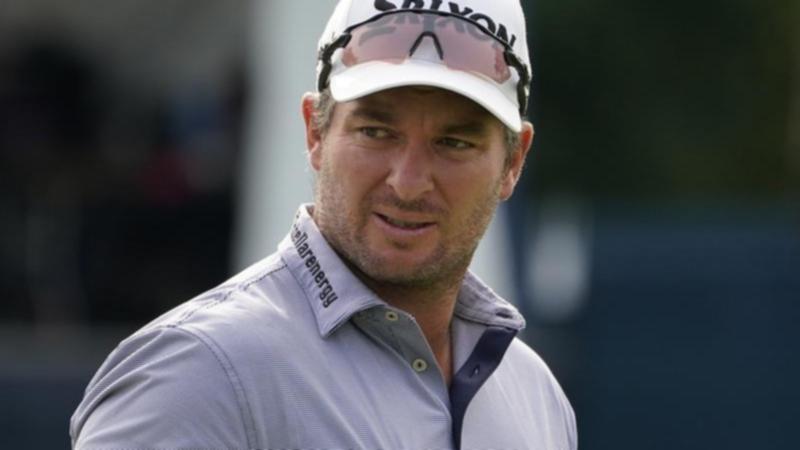 New Zealander Ryan Fox has earned the biggest victory of his golfing career, having to overcome final day nerves before completing a wire-to-wire victory in the Ras Al Khaimah Classic.

Fox, the son of World Cup-winning All Blacks great Grant Fox, had taken a six-shot lead into the final round at the Al Hamra Golf Club in the UAE on Sunday after dominating the week.

But seeking just his second triumph on the European tour, victory didn’t come easy for the 35-year-old as he saw his lead cut to just two after a nervy first seven holes which he covered in one-over.

But he showed considerable composure to regroup and eventually shoot a three-under 69 to finish on a commanding 22-under total, which left him five strokes clear of his nearest pursuer Ross Fisher.

“Probably relief is the main emotion, because it was a bit of a struggle today,” smiled the delighted Aucklander afterwards.

Fox’s recovery had begun with a birdie on the eighth before he began to move away again with a monster 14-metre putt on the 12th.

When Fox birdied the next as well, he had gained breathing space over his nearest pursuer, Spain’s Pablo Larrazabal, and his chasers then began to fade away on the home stretch as he was even able to walk down the last fairway chatting happily to the cameras.

“My stomach’s stopped feeling weird now,” he said as he marched down the 18th.

“It’s been a nervy day I can tell you that – but it’s quite nice to have a long walk up 18 with the putter in my hand.”

“Sleeping on a six-shot lead, I did not sleep very well last night and a couple of guys came at me early, so I was a bit nervous.

“It was going south pretty quickly and I’m pretty happy I could turn it around and show quite a bit of mental fortitude.

“I had that awful feeling in the pit of my stomach all day but I’m very happy with how I played, a couple of great shots coming down the stretch.”

It was a particularly impressive triumph as Fox had missed the cut on the same course last week, suffering a back injury and he ended up offering profuse thanks to the physios who knocked him back into shape.

It was a landmark achievement for Fox, the world No.211 who’s now won 13 tournaments around the world, but none of this stature.

He had never won a 72-hole strokeplay event on the European tour, even though he had taken the Super 6 tournament title in 2019 which featured a six-hole knockout format following 54 holes of strokeplay.

Larrazabal, who had covered his first seven holes in three under, eventually faded to joint-third at 16 under alongside South Africa’s Zander Lombard and Germany’s Hurly Long, while Englishman Fisher’s 66 earned him outright second.

Australia’s Jason Scrivener finished ninth-equal after a good week’s work ended with the man from Perth birdieing the last for a 69 and a 14-under total, while Wade Ormsby’s 69 left him at 10 under in joint-33rd.