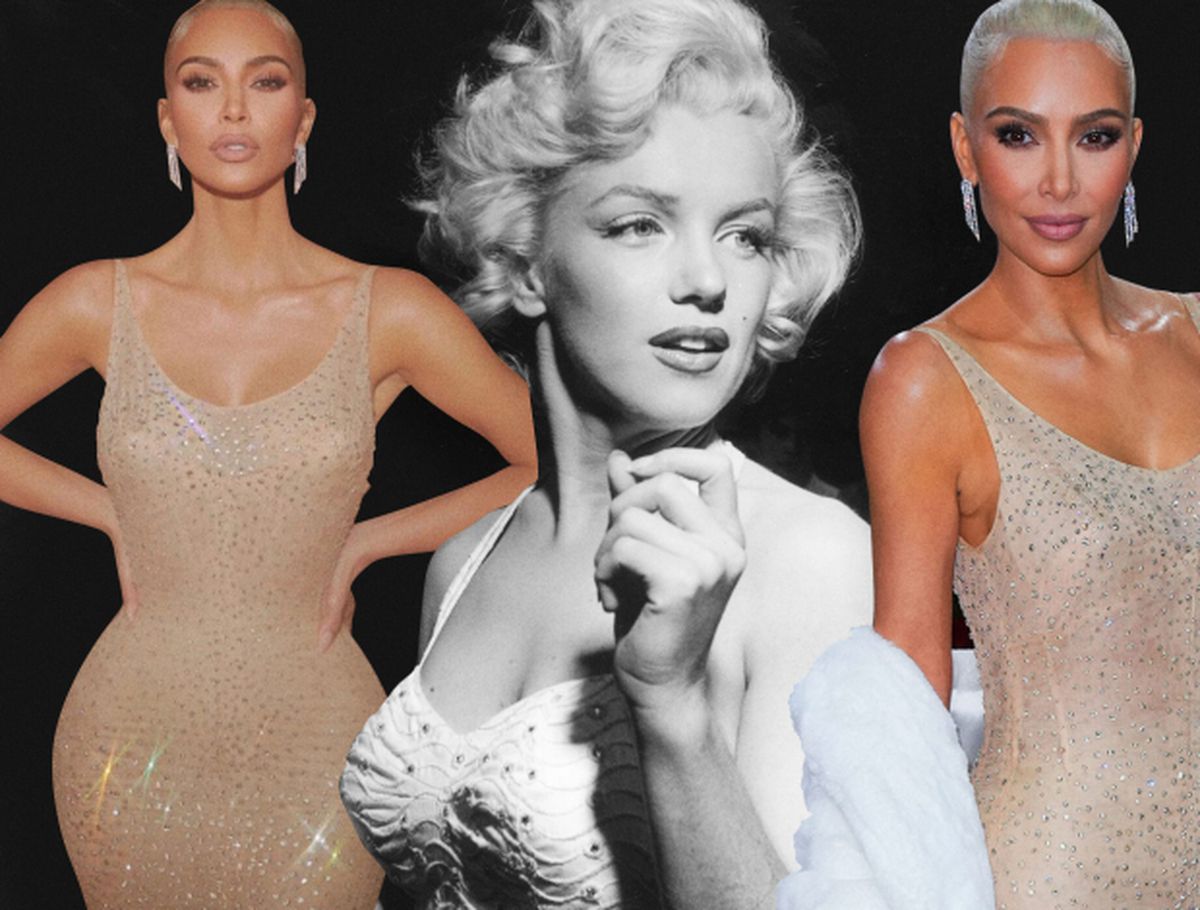 “The idea really came to me after the [Met] gala in September last year,” Kim Kardashian told the American edition of Vogue magazine when asked about her look this year. The 2021 Met Gala theme, “In America: A Lexicon of Fashion,” was the prequel to this year’s theme “In America: An Anthology of Fashion.” “I thought to myself, what would I have done for the American theme if it had not been the Balenciaga look? What’s the most American thing you can think of? And that’s Marilyn Monroe.” The celebrity’s idea was to wear the iconic dress that Marilyn Monroe wore to sing “Happy Birthday” to President John F. Kennedy in May 1962, just a few months before she ended her own life.

Kim Kardashian also admitted that she had to lose eight kilos in three weeks to wear that dress for just a few minutes, the time it takes to walk down the red carpet. For dinner, Kim Kardashian dressed in an exact replica, since, as she explained, she would not have dared to eat a bite while wearing such a piece of history. The celebrity confessed that the museum piece did not fit her when she tried it for the first time, so she went on a strict diet that would end that same night with a feast of “pizza and donuts.”

Since making that statement, Kim Kardashian has been heavily criticized on social media for promoting unhealthy physical standards, achievable only through rapid weight loss and subsequent binge eating. If that weren’t enough, she bragged about the process. Social media users find the attitude reprehensible. Ana de Hollanda, the endocrinologist and nutritionist who coordinates the obesity group of the Spanish Society of Endocrinology and Nutrition, explains: “Weight loss should be achieved through lifestyle changes, keeping in mind that these changes should be sustainable over time. The weight loss goal should be agreed upon between the person with obesity and their doctor or dietitian, always for the goal of improving health and not in order to fit into a certain size or look good at a certain time of the year, like the summer.” Or the Met Gala.

“What I wonder is why a personality of the stature of Kim Kardashian always ends up talking about her body and her weight. It gives me the feeling that they are a family enslaved by their own bodies,” says Raquel Carrera, activist, co-creator of the body positivity platform SoyCurvy. “It is curious,” Carrera continues, “because this does not happen with people who are much thinner.” Although she acknowledges that Kim Kardashian has managed to expand beauty standards beyond the glorification of extreme thinness, Kim Kardashian’s body continues to be part of an unattainable standard. “I am glad that there are some curves. The issue is that her curves restrict us just like other body types. Kim Kardashian’s body does not represent reality. A large person has a belly, has love handles, has fat in places where she would prefer not to have fat. Kim Kardashian has none of that and she seems like she is constantly controlling herself in order to not get fat.”

It is not the first time that the celebrity boasts to the press of unhealthy practices for aesthetic purposes. At the 2019 Met gala, Kardashian confessed that she had to take breathing classes to be able to wear the corset signed by Thierry Mugler, which restricted her movement so much that she could not dine comfortably. On another occasion, the reality star confessed on “The Ellen Degeneres Show” how far she would go to wear the perfect look: “I don’t care how uncomfortable, I don’t care if I have to wear a diaper and not go to the bathroom. I don’t care what I have to do.”

Kim Kardashian is the creator and ambassador of Skims, a $3.2 billion shapewear company that advocates for body diversity. Despite the company’s alleged mission, its latest campaign uses models that appear straight from Victoria’s Secret, thereby promoting conventional beauty standards. Both she and her sisters have played a part in popularizing a new archetype of feminine beauty. They are partially responsible for the rise of contouring, a makeup technique that models facial features and blurs so-called defects, resulting in the clone-like “Instagram faces,” and they have fueled a growing interest in cosmetic procedures including injectable buttock-shaping treatments and lip fillers.

Most strikingly, as Kim Kardashian glamorized the idea of suffering for fashion at the Met Gala, she was wearing the dress of one of the most misunderstood women in history.

The day Marilyn Monroe donned the iconic garment, the actress had asked director George Cukor for permission to travel to the President’s birthday celebration in New York. Monroe was shooting the movie “Something’s Gotta Give” with actor Dean Martin. George Cukor had initially granted her permission, but later turned it down due to delays in filming. The delays had to do with Monroe herself, whose mental state led to her notorious absences: the actress had just left the Payne Whitney psychiatric clinic, where she had voluntarily admitted herself after her divorce and a notorious box office failure. As Marilyn Monroe rehearsed the “Happy Birthday” that would become the stuff of legend, director George Cukor was already thinking of actresses to replace Monroe. She was fired from her a few weeks later, though at Dean Martin’s request, she was later rehired. During JFK’s 45th birthday celebration gala at Madison Square Garden, in front of more than 15,000 people, the host Peter Lawford, Kennedy’s brother-in-law, made a joke of the actress’s bad reputation, repeatedly introducing her to the audience and then apologizing when another guest took the stage. After Monroe’s performance, rumors began to emerge about the alleged relationship between the actress and the president of the United States.

The dress went down in collective memory as one of the most iconic dresses in pop history. Marilyn Monroe committed suicide just three months after wearing it. With that, the same society that had condemned the actress for her alleged adventures and publicly mocked her bad reputation elevated her to the category of icon. Since then, the life and death of Marilyn Monroe has been revisited by numerous biographers, documentarians, film directors and writers who have explored the gender issues behind her tragic story. Feminist Gloria Steinem, author of the biography “Marilyn: Norma Jean,” noted in an interview on the “American Masters” podcast that the actress’s misunderstood issues are problems with which many women can empathize today: the extreme objectification of the female body, sexual abuse in childhood, the vulnerability of a woman in a male world that did not take her or her mental health seriously.

Perhaps Marilyn Monroe’s dress should not simply be a pop culture icon, but a reminder of an event that could forever shatter the fragile mental health of a 36-year-old woman. Kim Kardashian may have only taken a few steps in the emblematic dress. But by evoking Marilyn Monroe solely as a sexual icon, and trivializing women’s suffering for entertainment, she took many more steps in the wrong direction.