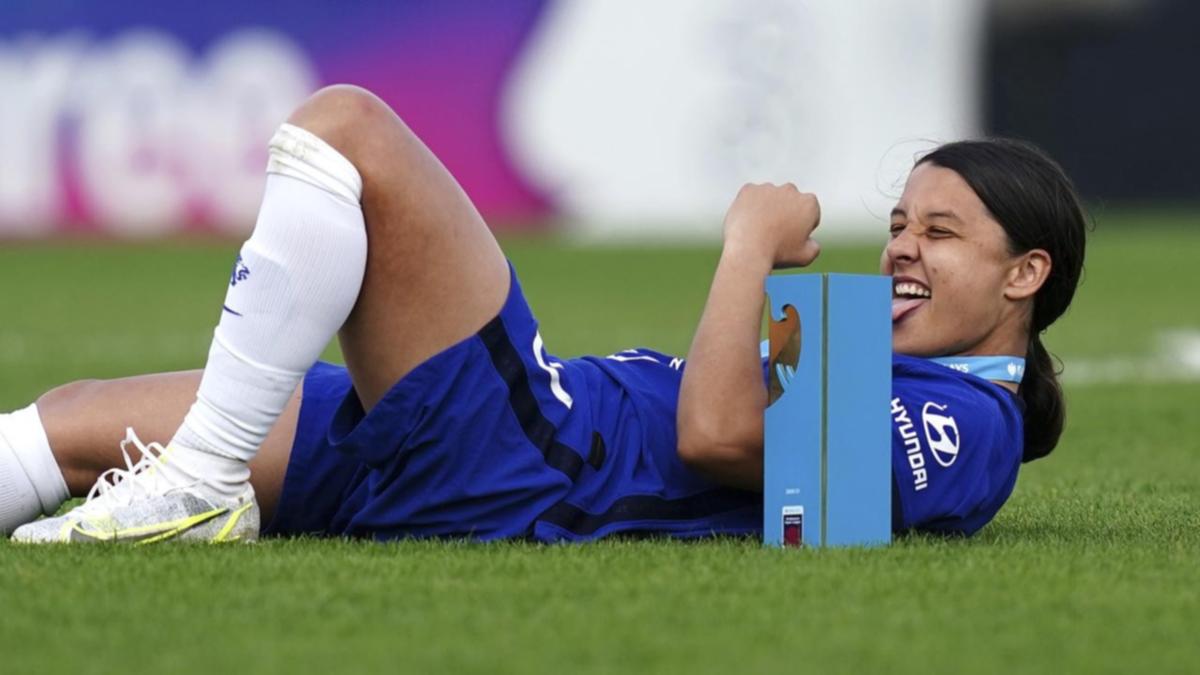 Matildas captain Sam Kerr has been named the Football Writers’ player of the year, crowning another outstanding season with Chelsea in the Women’s Super League.

Liverpool’s Mohamed Salah won the men’s award, with the forwards receiving their trophies at the Footballer of the Year dinner in London on Thursday.

The women’s vote was open to the full FWA membership for the first time with the award, which was introduced from 2018, having previously been decided by an expert panel.

Kerr, who has scored 18 goals in the Women’s Super League to help Chelsea top the table, claimed 40 per cent of the vote, with Arsenal’s Vivianne Miedema in second place and Manchester City’s Lauren Hemp third.

The Blues are a point ahead of Arsenal heading into the final WSL match of the season and could clinch the title against Manchester United on Sunday.

Comparing this season to previous years, Kerr said: “I think it’s the same. I think every year I strive to be the best player I can be and I think as I get older I appreciate it more.

“It still is enjoyable, but you can’t really compare (seasons).”

Salah, who was part of the Liverpool side beaten by Real Madrid in the 2018 Champions League final in Kyiv, says he is preparing for a “revenge” mission.

The sides will face off in Paris on May 28 after Real’s remarkable comeback victory over Manchester City on Wednesday and Liverpool’s professional job in Villarreal the night before.

Asked if he saw this next meeting as a revenge mission for four years ago, the Egypt forward replied: “Yes, we lost in the final, it was a sad day for all of us and I think it is revenge time.

“I want to thank everyone who voted for me, of course journalists are a big part of the football family and hopefully we can win some more (trophies) this year.”

Salah took 48 per cent of the vote in the men’s category, ahead of Manchester City playmaker Kevin De Bruyne and West Ham midfielder Declan Rice.

The Egyptian has scored 30 goals for the Reds this season, 22 in the Premier League, as Juergen Klopp’s side chase further domestic and European success.

The 29-year-old wins the FWA award for the second time, having also been named the 2018 Footballer of the Year.