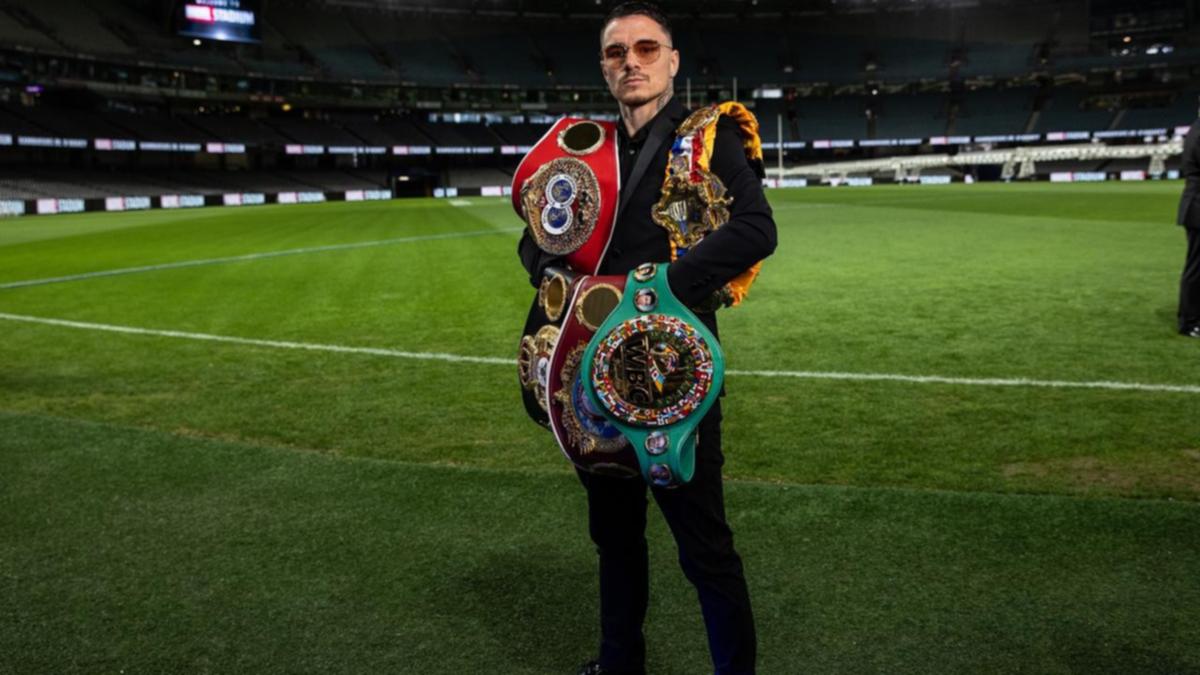 Kambosos and his team officially announced on Friday he will take on the American at Melbourne’s Marvel Stadium on June 5.

The last time Kambosos fought in Australia was in 2017 at the Melbourne Pavilion in front of sold-out crowd of around 1000 people, which he won by TKO in the ninth round.

As holder of four world lightweight belts, a crowd of around 50,000 is expected at the roofed football stadium with Kambosos saying Haney will be “mentally exhausted” before he even gets into the ring.

Haney, 23, has the WBC lightweight title – the only belt the Australian doesn’t own.

Just like he did with another American, Teofimo Lopez, to win those four titles at Madison Square Garden last November, Kambosos started the early mental warfare.

He riled his opponent by calling him a “kid” during their Friday press conference.

“I’m not a kid, so he can stop calling me a kid,” Haney said on a broadcast cross from LA.

“I pick, little stabs, and I see what triggers and what doesn’t and it was real quick, easier than triggering the Lopez team,” he said.

“This is going to be fun … by the time he actually steps inside Marvel stadium, he’s going to be that mentally exhausted and then he’ll realise I’ve got to fight in front of 60,000 people against that animal Kambosos, it’s going to be a painful night for him.”

He said Haney, who will arrive in Australia in early May to prepare, wasn’t mentally strong enough to match him.

“He’s mentally not strong enough, I just saw it then,” Kambosos said.

“I’ve mentally broken him already – I’m living in his head rent free and when he comes here, physically what I’m going to do with this kid, I’m going to punish him.

‘The more he talks, the worse it’s going to be for him.”

Haney’s father and trainer Bill, who was also part of the press conference, said his son wouldn’t let Kambosos get under his skin.

“Nothing George can do or say can get Dev out of his character,” Haney senior said.

“It won’t be anything that’s going to disrupt him.”

The Sydneysider said he had “manifested” fighting in such an arena during his lean years on the road working his way up to world champion.

As part of the deal, Haney agreed to a rematch in Australia should he win while if Kambosos wins he can again go after Ukrainian Vasiliy Lomachenko.

“I trust in my skills so much. I’ll fight you anywhere,” Haney said.

“I’ll fight you in your backyard if I had to because I know that I’m going to beat you.”