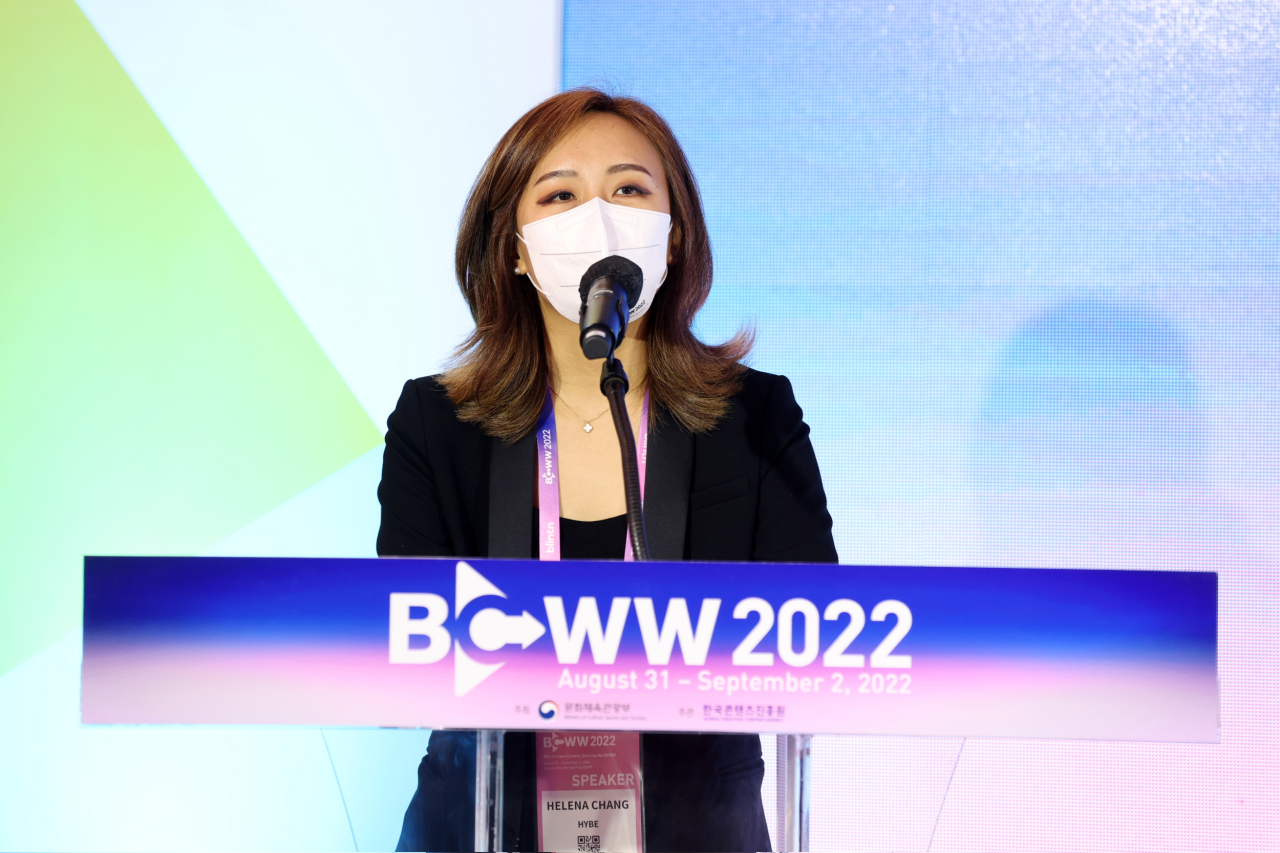 Hallyu, or the Korean Wave, has long been a global phenomenon around the globe. Amid the continued success of Korean content and the never-ending growing popularity of K-pop, the local entertainment industry has offered an exciting content strategy to meet the Hallyu fans’ demand.

The content business lead of Hybe, the K-pop powerhouse behind boy band BTS, believes that producing K-pop artist-driven content has largely contributed to enlarging global fandoms, as well as the spread of Korean culture to the world.

“Producing and releasing various multiplatform content targeting audiences both at home and abroad has been one of our major global businesses,” Helena Chang, Hybe’s content business lead, said during the conference session titled “K-Contents and the Korean Wave: Expanding the Cultural Horizon for World Citizens” at the Broadcast Worldwide 2022 in Seoul on Thursday.

Fusing the powerful influence of K-pop artists and content raises the audience’s preference for Korean content, according to the expert. In a way, the firm has diversified content for multiple platforms from television to streaming media services and theaters to even the fan community platform Weverse.

“The biggest strength and merit of K-pop artist-driven content is that it doesn’t get old, even content that was made from two years back, because it’s considered fresh to newcomers,” she said, citing the firm’s notable achievements in the content business, such as the online concert “Bang Bang Con: The Live” and the television and streaming series “In the Soop.”

Chang has led major content collaboration projects between Hybe and global streaming platforms, which marked the start of content-oriented unique strategies targeting multiple platforms. Among the popular content, “Bang Bang Con: The Live” set a new Guinness World Records title and the film “Bring the Soul: The Movie” was released in 122 countries.

The point of K-pop artist-driven content is to create a mutual synergy between K-pop artists and content business, Chang said. Hybe’s content came as artists face limitations of time and space to build a stronger bond with fans worldwide, even amid the ongoing COVID-19 pandemic, she added.

Two business sectors — K-pop and content — may seem similar but quite different in reality, the content business chief said. The K-pop industry’s primary focus had been on management and music, but as the value of content has been proved recently, entertainment companies are eager to create differentiated content, she said.

“We believe our company has contributed to the spread of Hallyu by releasing K-pop artist-driven video content on multiple platforms. The initial content was based on BTS, but now we’re expanding to other artists such as Seventeen and Tomorrow X Together,” she said.

Chang also vowed a continued push on spreading the content even further, expecting the two contents can create even greater synergies together in the future. As part of the effort, she introduced the K-pop agency’s upcoming content business dubbed, “What Sub.”

Meanwhile, BCWW is an annual event showcasing South Korean content and insights into the broadcast industry around the world. The three-day event kicked off Wednesday at Dongdaemun Design Plaza in Jung-gu, Seoul.

Over 600 buyers and officials from 31 countries have registered for this year’s event, including NBC Universal and Warner Media, according to the program’s organizers, the Ministry of Culture, Sports and Tourism and Korea Creative Content Agency.