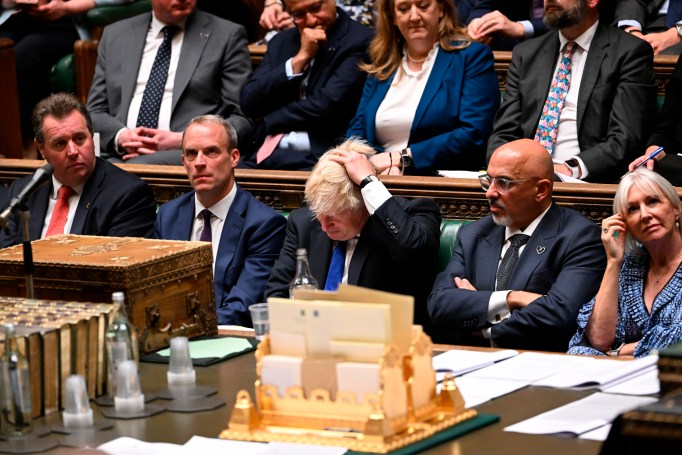 After a dramatic day in Westminster, government ministers gathered in Johnson’s official residence to tell him to quit as UK leader after he insisted he would not stand down in the face of a mounting rebellion within his party.

With well over 30 government resignations and many MPs in his Conservative Party in open revolt, some senior ministers gathered in Downing Street to tell the prime minister he needed to go, according to sources.

However, insiders also said at least one MP was there to back him if he decided to fight on.

It was widely reported overnight that Gove was among the ministers telling him to step down – a move that reportedly prompted Johnson to sack him as Secretary of State for levelling up, housing and communities.

What is the PM going to do about all the Cabinet ministers who *were* briefing they wanted him to go?

Despite the clamour for him to resign, Johnson said he had a mandate from the 2019 general election, which he won with a large majority, to plough on.

“I am not going to step down and the last thing this country needs, frankly, is an election,” he told a parliamentary committee, refusing to answer whether he would try to stay in the job even if he lost a confidence vote from his own MPs.

ITV reported on Wednesday evening that Johnson was absolutely defiant and was not going to resign, telling cabinet colleagues that they faced the choice between a summer focused on the economy or a leadership contest.

Exc: told PM absolutely defiant and is not going to resign. Sources tell me he told Cabinet colleagues that it was a choice between summer focused on economic growth or chaos of a leadership contest- followed by massive pressure for general election 1/

.@DehennaDavison tells #peston says anyone with dignity would do the right thing – re Boris Johnson. Says she finds it distasteful.

The dramatic resignations on Tuesday evening of his health and finance ministers triggered a growing swell of other ministerial departures while many Conservative MPs openly said they wanted him gone, questioning his fitness to govern and his integrity.

It is with great regret that I am today resigning as a minister in the Department for Education – I am very grateful to the Prime Minister for having given me the opportunity to serve pic.twitter.com/mDJUksDGM8

My statement on the Prime Minister: pic.twitter.com/ItT8zUCEgp

We’re now at 30+ ministerial resignations, including Chancellor. Reminder of how much graver this is than previous moves against prime ministers and how much harder BJ is digging in. In 2006 Tony Blair was forced to set his departure date after losing 1 minister and 6 PPSs. https://t.co/2zzoQb2Rud

At parliamentary questions on Wednesday some Conservatives struggled not to laugh when others poked fun at him and he took a pummelling from a committee of senior politicians over his past behaviour, his motivation and some of the scandals that have come to define much of his tenure.

Johnson came to power nearly three years ago, promising to deliver the United Kingdom’s exit from the European Union and rescue it from the bitter wrangling that followed the 2016 Brexit referendum.

Some Conservatives enthusiastically backed him while others were happy to support him despite reservations about the former journalist and London mayor because he was able to appeal to parts of the electorate that usually rejected their party.

That was borne out in the December 2019 election.

But his administration’s combative and often chaotic approach to governing and a series of scandals have exhausted the goodwill of many of his MPs while opinion polls show he is no longer popular with the public at large.

Despite even one-time supporters saying the current crisis could only end with his resignation, Johnson vowed to fight on and his spokesperson said he was confident of winning another confidence motion, having only narrowly triumphed in a previous one last month.

“The job of a prime minister in difficult circumstances when you’ve been handed a colossal mandate is to keep going,” Johnson told parliament.

Johnson might take some relief from the 1922 Committee that sets the rules for Conservative leadership confidence votes.

It decided to hold an election to its executive before changing the rules to allow a second confidence vote on his leadership.

He has tried to reassert his authority by quickly appointing Nadhim Zahawi – a rising Conservative star widely praised for the successful rollout of COVID-19 vaccines – as finance minister.

But within a day of his elevation, Zahawi was in the group of ministers in Downing Street who were to tell him to go.

Earlier in parliament, senior ministers struggled to contain their laughter as the opposition Labour leader poked fun at his cabinet for being in the “charge of the lightweight brigade”.

“At some point, we have to conclude that enough is enough. I believe that point is now,” Sajid Javid said in his resignation speech as health minister, with Johnson listening stony-faced.

His leadership has been mired in scandals over the last few months, culminating in this week’s resignation of deputy chief whip Chris Pincher, before revelations the PM had been aware of past allegations of bad behaviour by the MP.

Johnson was previously fined by police for breaking COVID-19 lockdown laws while a damning report laid bare breaches of those rules by Downing Street officials and a committee is investigating whether he then lied to parliament about it.

There have also been policy U-turns, an ill-fated defence of an MP who broke lobbying rules and criticism he has not done enough to tackle inflation, with many in the UK struggling to cope with rising fuel and food prices.