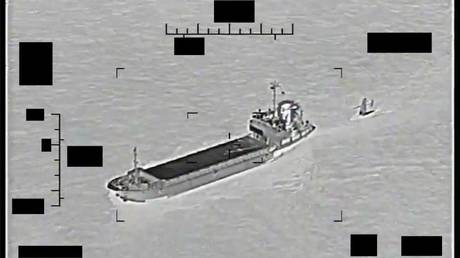 The crew of an Iranian warship temporarily seized two US sea drones in international waters of the Red Sea. It was the second such incident this week involving Washington’s unmanned surface vessels in the region.

“The frigate ‘Jamaran’ seized the two vessels on Thursday to prevent any possible accident after issuing warnings to the US fleet,” Iranian state-run television reported on Friday. “After international shipping lanes were secured, these two vessels were released in a safe area.”

Video footage that was reportedly shot from the deck of the frigate appeared to show Iranian sailors tossing one of two Saildrone Explorers overboard. “The US Navy was warned to avoid repeating similar incidents in future,” the television report added.

An unidentified Pentagon official told NBC News and other media outlets that two American destroyers that were operating nearby confronted the Iranian ship over the radio and followed it until the drones were released on Friday morning, about four hours after they had been taken. He alleged that Iranian sailors initially tried to cover up the drones with tarps and deny that they had them.

According to the Iranian report, Tehran’s forces found “several unmanned spying vessels abandoned in the international maritime routes.” After two warnings to a nearby US destroyer went unheeded, two drones were seized “to prevent possible accidents.”

The latest incident comes after the US Navy’s Fifth Fleet issued a statement on Tuesday saying that an Islamic Revolutionary Guard Corps (IRGC) vessel was spotted towing an American Saildrone Explorer in the Persian Gulf. The IRGC disconnected its tow line and released the drone about four hours later, after being confronted by a US Navy patrol ship and helicopter.

Vice Admiral Brad Cooper, commander of the Fifth Fleet, called the IRGC’s temporary seizure “unwarranted and inconsistent with the behavior of a professional maritime force.” He added, “US naval forces remain vigilant and will continue to fly, sail and operate anywhere international law allows while promoting rules-based international order throughout the region.”

The Fifth Fleet launched a new drone task force in the region last year amid rising tensions with Iran.