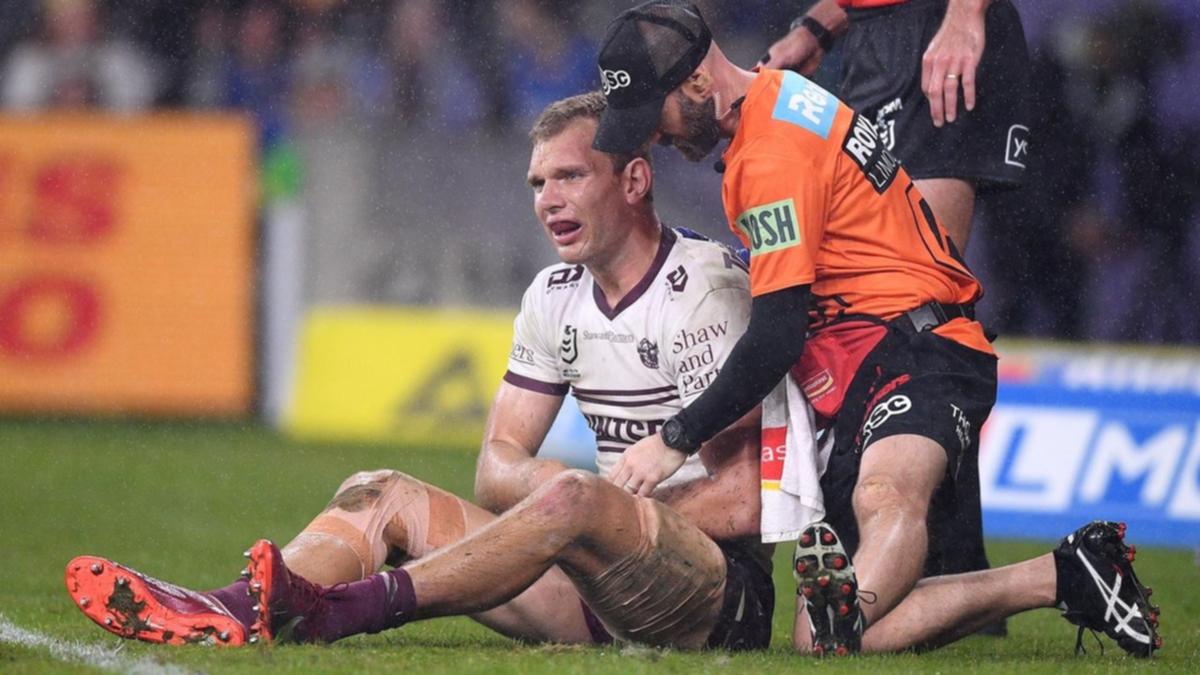 A dejected Tom Trbojevic went to the length of apologising to Manly teammates after feeling as if he had let them down by dislocating his shoulder in the Sea Eagles’ loss to Parramatta.

Trbojevic’s NRL season hangs by a thread after he was hurt in Friday night’s loss, with the superstar fullback set for scans on his left shoulder once swelling subsides.

Trbojevic was hurt jostling with Makahesi Makatoa for a loose ball to try and stop an Eels try in the Sea Eagles’ 22-20 loss, before it was later denied for a knock-on in the lead up.

In good news for Trbojevic, officials were able to get the shoulder back in its place and he was not required to be taken to hospital as was initially feared.

There remains some hope he could be able to return within the next two months, but there is a greater concern his year may be close to over if the damage to the joint is serious.

His injury comes as not just a major blow to Manly but also NSW, with any chance of him playing in the State of Origin series-opener seemingly gone.

Trbojevic and brother Jake cut disappointed figures after the match, with players doing their best to comfort the fullback amid his wretched run of injuries.

“It’s hard to be positive when these things happen. It’s tough one.

“The first thing he said to us was sorry. It’s just the type of guy he is … It almost makes you feel worse for him.

“He would be so upset (feeling) that he let us down and didn’t finish that game with us. Fingers crossed (it’s not bad).”

Manly players were clear Trbojevic had nothing to apologise for, as they surrendered a 20-10 lead late.

Trbojevic’s injury is a hit to not just the Sea Eagles but the NRL, given he is one of the game’s most exciting players after winning last year’s Dally M Medal.

Manly players are also well aware of his impact on their side, adamant they have learned to play without him while also not blind to the fact they are a far better team with Trbojevic in it.

The Sea Eagles had at one stage won just seven of 31 games without their fullback between 2019 and the opening month of 2021, but have claimed victory in seven of nine since.

“Obviously the calibre of player he is. You can’t help but think where that leaves him and where it leaves us with the extent of the injury.”

Meanwhile Reuben Garrick said he now felt comfortable stepping into the role from the wing if asked, after doing so for a month earlier this season.

“The more you play in any position, the more you get a feel for it,” Garrick said.

“Especially at the top level. You have to have all your numbers down pat. Otherwise the great playmakers will take advantage of it.

“I am feeling more comfortable with it.”