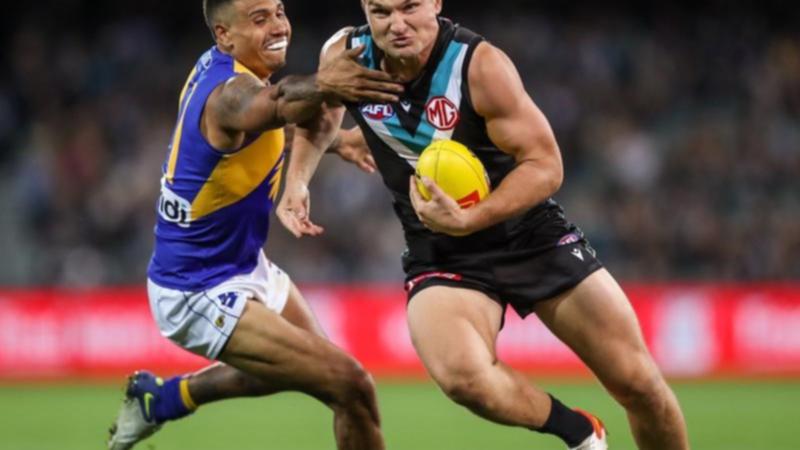 Gray’s injury, initially diagnosed as a jarred knee, came as the Power overwhelmed the lacklustre Eagles with seven goals to none in a second-term spree.

The Power entered Adelaide Oval on the club’s worst-ever start to a season – five straight losses.

But they jump from bottom to 14th on the ladder after Todd Marshall (five goals) starred in the second-quarter assault.

The Eagles, in the mire in 17th spot with one solitary win, held sway in a dour opening quarter – 1.2 apiece.

Then, the Power surged as recruit Jeremy Finlayson (five goals) and Karl Amon book-ended a seven-goal burst in just 25 minutes.

The Power were triggered by the dynamic Connor Rozee, who had 20 disposals to halftime and 31 for the match.

Port’s Brownlow medallist Ollie Wines was also instrumental in the blitz – on return after a heart scare in an April 7 game, the midfielder’s 16 first-half disposals included six inside 50s.

Port’s 21 to seven inside 50s for the second quarter included Kane Farrell’s goal from near a boundary line in his comeback match from a knee reconstruction.

Ex-GWS utility Finlayson then took the spotlight in the third quarter, kicking three goals as Port motored to an 11.8 to 1.8 advantage at the last change.

Port’s Rozee and Wines, who finished with 33 touches, 10 inside 50s and a goal, were midfield forces alongside Dan Houston (33 possessions) and Travis Boak (34 disposals).

And winger Amon made the most of his reprieve, gathering 25 disposals and a goal as a replacement for late withdrawal Miles Bergman (illness).

West Coast’s Alex Witherdon (34) and Tim Kelly (30) led their team for disposals in another bleak outing for coach Adam Simpson’s side.

The Eagles opened the scoring with a Jamie Cripps goal in the first minute but didn’t manage another until Josh Kennedy’s snap in the third minute of the final term.