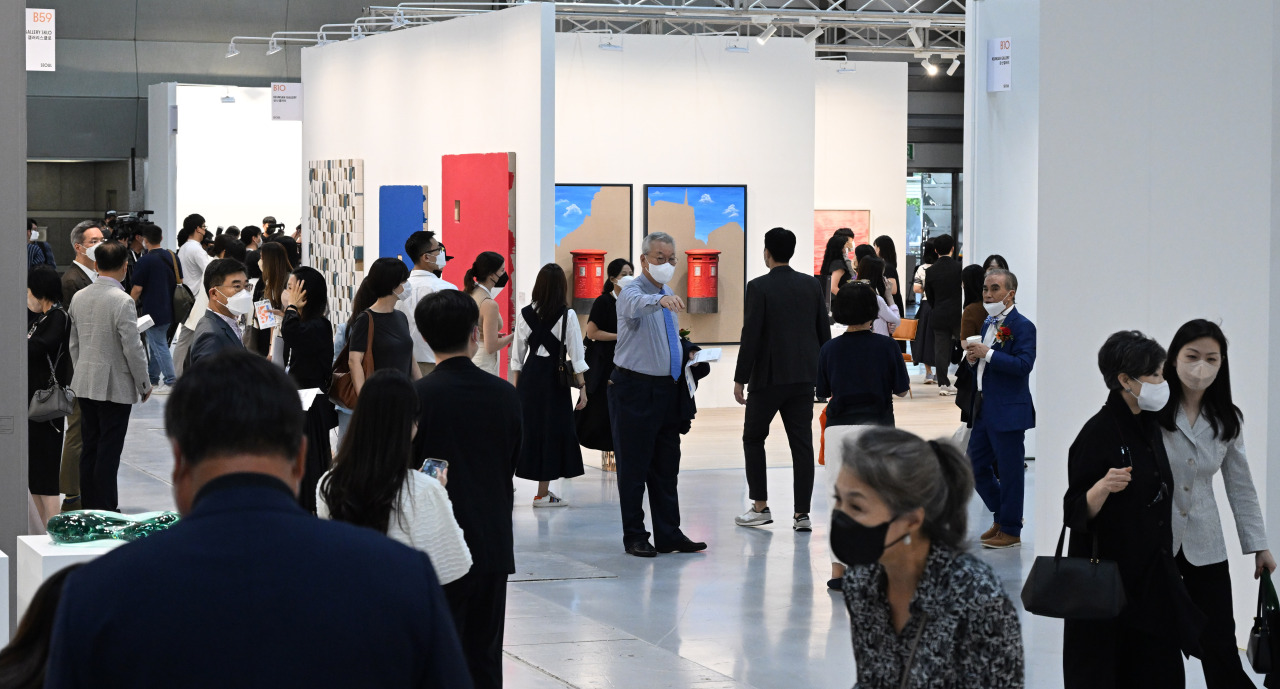 As 2 p.m. neared, people stood in a line wrapping down the hall on Friday at Coex in Seoul to enter the inaugural Frieze Seoul, with great anticipation for which works would be brought to the first art fair by Frieze in Asia and how its collaboration with the local art fair would turn out over the four-day event.

The first edition of Frieze Seoul kicked off at the same time as Kiaf Seoul, a local art fair held since 2002, for its VIP opening. Their first collaboration has attracted some 350 galleries from the world to the Coex exhibition center in southern Seoul, with hundreds of visitors already eager from the first minutes.

“I’ve been here like two times, but about eight years ago. It’s been a long time. The city has changed a lot. South Korea is an exciting market. It’s been growing last couple of years in terms of art,” said Nelson Caban, who is currently based in Hong Kong and in the art industry.

Some 110 galleries at Frieze Seoul brought with them quality works from artists represented by established global galleries such as Gagosian, Hauser ＆ Wirth, Thaddeus Ropac and Pace Gallery. New York-based Gladstone Gallery, which opened a venue in southern Seoul this year and represents Anicka Yi, showed new works of the artist, including “Reverse Osmosis” and “Qui Cocos?”

“The energy in Seoul is incredible. Curators and collectors from out of town are excited to be here. They are seeing all of the museums and visiting artists’ studios. Seoul is becoming a major platform for art,” said Maxime Falkenstein, a partner at Gladstone Gallery.

Celebrities who are known as avid art collectors also appeared at Frieze Seoul, including RM of BTS, singer Jung Ji-hoon and actor Kim Tae-hee. “RM visited the booth. He has been a fan of the artists that Hauser ＆ Wirth represents,” said Cho So-young, a public relations official from Hauser ＆ Wirth. The gallery has presented works by artists that include Philip Guston, Louise Bourgeois, George Condo and Camille Henrot.

Some Korean galleries at Frieze Seoul introduced Korea’s most significant artists of the 20th century to the international audience at Frieze Masters.

Hakgoje Gallery, based in Seoul, showed Paik Nam-june’s “Radio Man,” while Gallery Hyundai presented works by Korean avant-garde artists Quac In-sik, Lee Seung-taek and Park Hyun-ki, who are recently gaining global attention. Guggenheim in New York and the National Museum of Modern and Contemporary Art, Korea will jointly organize “The Avant-Garde: Experimental Art in South Korea in the 1960s and 1970s” next year, according to MMCA.

“I’ve never been to Korea before. Obviously Frieze coming here for the first time is important, but we see the same thing at all the fairs all over the world. What’s interesting will be to see more Korean things. The reason to come here is to learn a little bit about Korea,” said Michael Hue-Williams, an art dealer from England.

VIPs from each fair were allowed to cross between the two fairs after 5 p.m. VIPs for Kiaf Seoul, which took place on the first floor, visited Frieze Seoul on the third floor and vice versa from the early evening, while VIPs for both fairs could access either regardless of the time.

“It is quite important to us that each of the art fairs reflects the market in which we operate. Thirty percent of the galleries exhibited here are Asian galleries, and there are many Asian artists represented in galleries that may come from the US and Europe. I think the representation of Korean and Asian artists across the fair is very strong,” said Simon Fox, chief executive officer of Frieze.