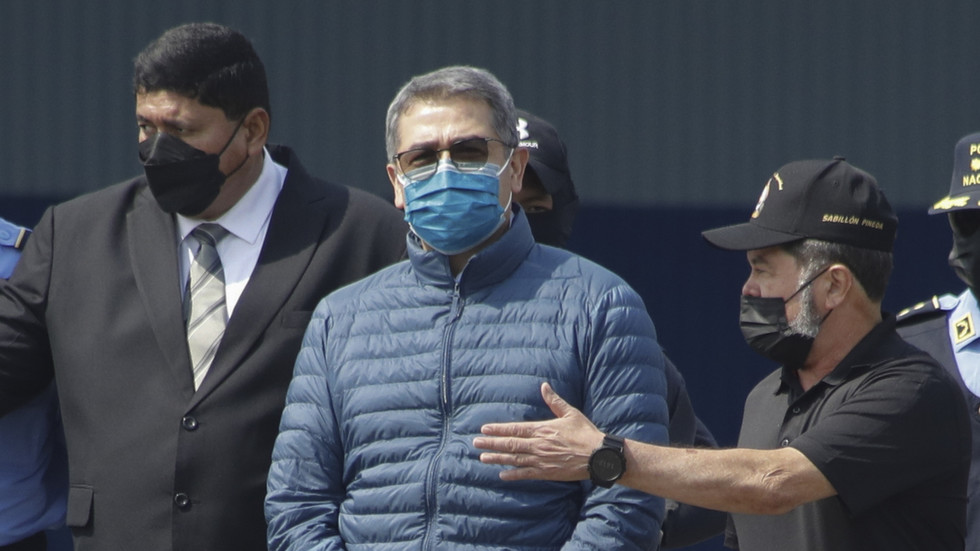 The former president of Honduras, Juan Orlando Hernández, was flown to the US on Thursday and arrested by Drug Enforcement Administration (DEA) agents upon arrival. Once an avowed ally of Washington, Hernández has been charged with facilitating the importation of massive quantities of cocaine to the US, as well as two firearms charges.

Following a request by the US Department of Justice, Hernández was arrested by Honduran authorities in February, and his extradition was approved earlier this month.

Hernández served as president of Honduras from 2014 until January of this year, but his involvement in the international narcotics trade predated his presidency, according to the indictment against him.

“From at least in or about 2004, up to and including in or about 2022, [he] allegedly participated in a corrupt and violent drug-trafficking conspiracy to facilitate the importation of hundreds of thousands of kilograms of cocaine into the United States,” read a statement from the Justice Department.


Hernández was allegedly paid by some of the world’s top drug syndicates, including the Sinaloa Cartel, to ensure narcotics flowed from South America, through Honduras, and into the United States. Hernández is accused of using bribes from drug traffickers to finance his political career, including his successful run for the presidency in 2013, and again in 2017.

Hernández was once a close ally of the US, and was praised by then-Vice President Joe Biden during his first term in office. He cooperated with the Trump administration in declaring opposition leader Juan Guaido the leader of Venezuela, and was lauded by Trump for “working with the United States very closely” to curb the flow of migrants to the US’ southern border.

However, a case was steadily being built against him, and his brother, Juan Antonio Hernández Alvarado, was extradited to the US in 2018 and convicted of cocaine trafficking by a US judge the following year. However, American authorities waited until Hernández lost another re-election bid this January before moving to extradite him.

Ironically, as a member of Honduras’ National Congress, Hernández helped pass a constitutional reform allowing Honduran nationals to be extradited to the US.

He has recently cited this, as well as his supposed work clamping down on organized crime, as proof of his innocence, maintaining that false information given to police by criminals was responsible for his arrest.

“This is revenge from the cartels, it’s an orchestrated plot so that no government will confront them again,” he said in a letter published last month. “Part of that conspiracy has been a campaign of hate and misinformation.”

If convicted of both the drugs and firearms charges, Hernández faces a mandatory minimum sentence of 40 years in prison.