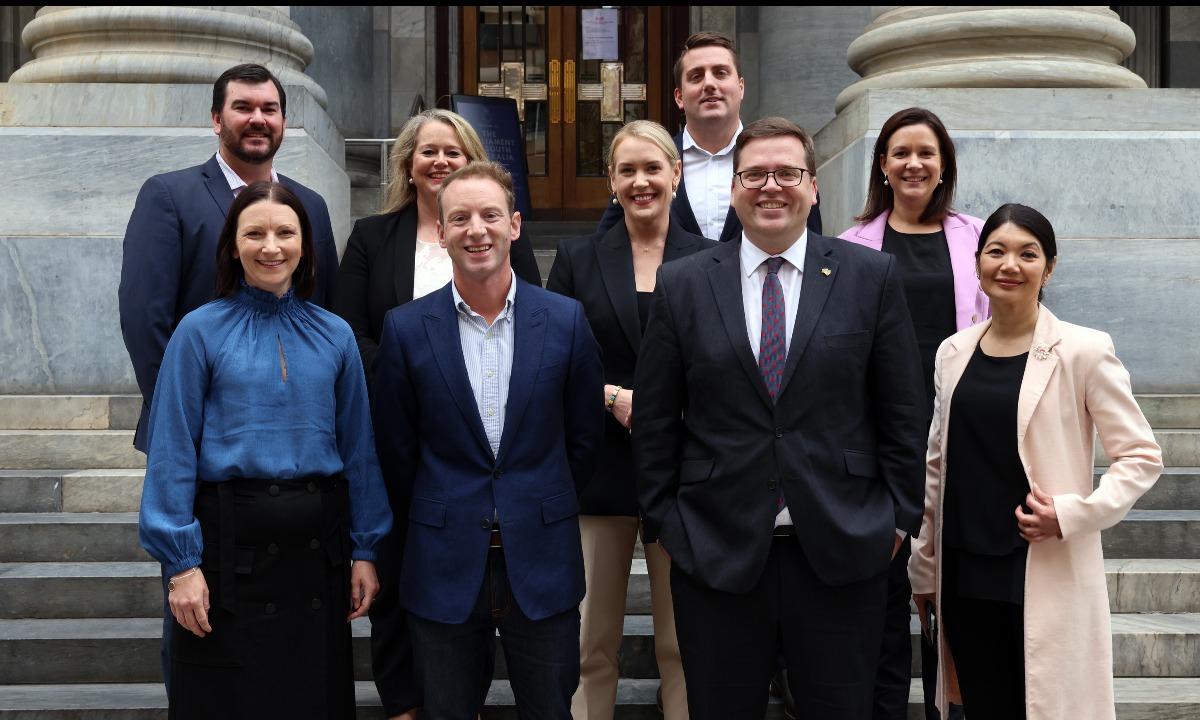 New MP and former Marshall government media advisor Ashton Hurn will take over the health portfolio from ex-minister Stephen Wade, promising to hold the Labor government to account on a decisive election pledge to fix the ambulance ramping crisis.

She will be aided by fellow first-term MP Penny Pratt, who has been appointed shadow minister for regional health services, ageing, and preventative health and wellbeing.

The new appointments come at the cost of former ministers Wade, David Pisoni and David Basham.

“I wanted to be the only David in the cabinet, so I thought the other two Davids – there just wasn’t a place for them,” Speirs joked, before confirming they had volunteered to be stood down from the frontbench.

“They wanted to concentrate on supporting the team (by) providing mentorship and looking after their electorates.

“Some of those people had fairly close-run election results on the 19th of March and so they wanted to really return to their electorates, spend more time connecting with the communities that elected them in March.”

Asked if he would have made room for former Attorney-General Vickie Chapman on his frontbench had she not taken the decision earlier this week to step down from politics amid accusations of a feud between the pair, Speirs said: “There could very well have been a place for Vickie Chapman on the shadow cabinet”.

“She had immense experience, she has contributed a lot to the party, to the state,” he said.

“She’s made an indication that she’d love to get alongside the younger women in the team and provide them with support and the benefit of her experience and I welcome that 100 per cent.”

The Opposition Leader, who has himself retained the environment portfolio he held in Government, described his new frontbench as “fresh-faced” and “youthful”, noting five of his appointed shadow ministers are aged in their 30s.

“I am Leader of the Opposition, the youngest leader of the Liberal party in our state’s history. I’m 37.

“I was able to be a pretty successful minister, I think, for four years in my 30s and I look forward to the people who are standing behind me and the other members of the shadow cabinet providing a really exciting alternative vision for the state of South Australia.”

Pressed on ABC Radio Adelaide this morning if he threatened before the March election to not run in his seat of Colton if wasn’t promoted to the frontbench, shadow treasurer Matt Cowdrey did not answer directly, saying he was “very keen to contribute in a greater way”.

“There’s always points in time where you take reflection and you look at what you’re doing and how you contribute and, as I’ve said, I’ve thoroughly enjoyed what I’m doing,” he said.

“I look forward to contributing in a greater way moving forward.”

The Paralympian-turned-politician told reporters later this morning that he could “absolutely 100 per cent” rule out suggestions he threatened to not run.

“Prior to the last election did I seek an indication from the then Premier about what my future may hold? Absolutely I did,” he said.

“I don’t make any apologies for wanting to serve my community to the best ability that I possibly have, but in regards to making threats that’s certainly not what I’m about.”