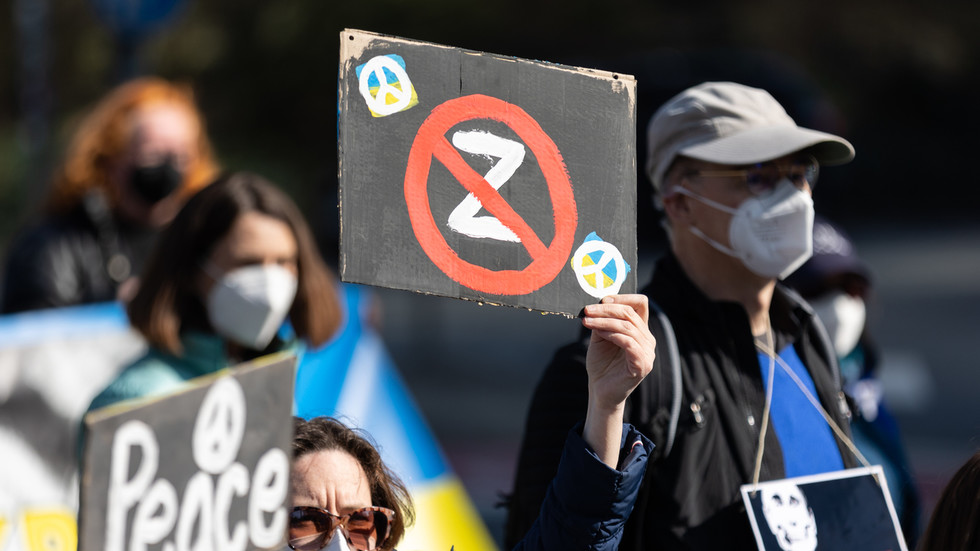 The parliament of Latvia has adopted a law banning the display of the letters “Z” and “V” in public, saying the symbols used by Russian troops in Ukraine stand for glorifying aggression and war crimes. The former Soviet republic, now an EU and NATO member, acted after the government in Kiev called for the censorship of the symbols.

The Saeima used urgent procedure to vote on Thursday on amendments prohibiting displays of “military aggression and war crimes” at public events.

The law also says no permits for public events will be given if they are held within 200 meters of monuments commemorating the Soviet Army in Latvia. Individuals convicted under the new law will be fined up to €400, while companies can be fined up to €3,200.

“In condemning Russia’s hostilities in Ukraine, we must take a firm stand that symbols glorifying Russian military aggression, such as the letters ‘Z’, ‘V’ or other symbols used for such purposes, have no place in public events,” Artuss Kaimins, chair of the Saeima’s Human Rights and Public Affairs Commission, said in a statement.


His words echo those of Ukrainian Foreign Minister Dmitry Kuleba, who earlier this week called on the entire world to “criminalize” the “Z” as support for Russian “barbarism.” A Slovenian diplomat on Thursday revealed that his embassy in Kiev was asked to take down their flag because it was too similar to that of Russia.

Several German states have already said they would fine individuals for displays of the symbol. Latvia’s neighbor Lithuania is also considering a ban on “Z,” as well as the black-and-orange St.George’s ribbon, used on Soviet WWII victory medals.

Latvia officially bans symbols glorifying Nazi or Communist regimes, except when used for “educational, scientific or artistic purposes.” That has not stopped the annual marches honoring Latvian members of the Waffen-SS. Some 200 people gathered in Riga on March 16 to honor Hitler’s collaborators, after a two-year hiatus due to the Covid-19 pandemic.


Neither V nor Z are part of the Russian alphabet, which uses the Cyrillic script. Both symbols have been used to distinguish Russian vehicles taking part in military operations in Ukraine over the past month.

Moscow sent troops into Ukraine in late February, following a seven-year standoff over Kiev’s failure to implement the terms of the Minsk agreements and end the conflict with the breakaway regions of Donetsk and Lugansk. Russia ended up recognizing the two as independent states, at which point they asked for military aid.

Russia demands that Ukraine officially declare itself a neutral country that will never join the US-led NATO military bloc. Kiev insists the Russian offensive was completely unprovoked and has denied claims it was planning to retake the two Donbass republics by force.