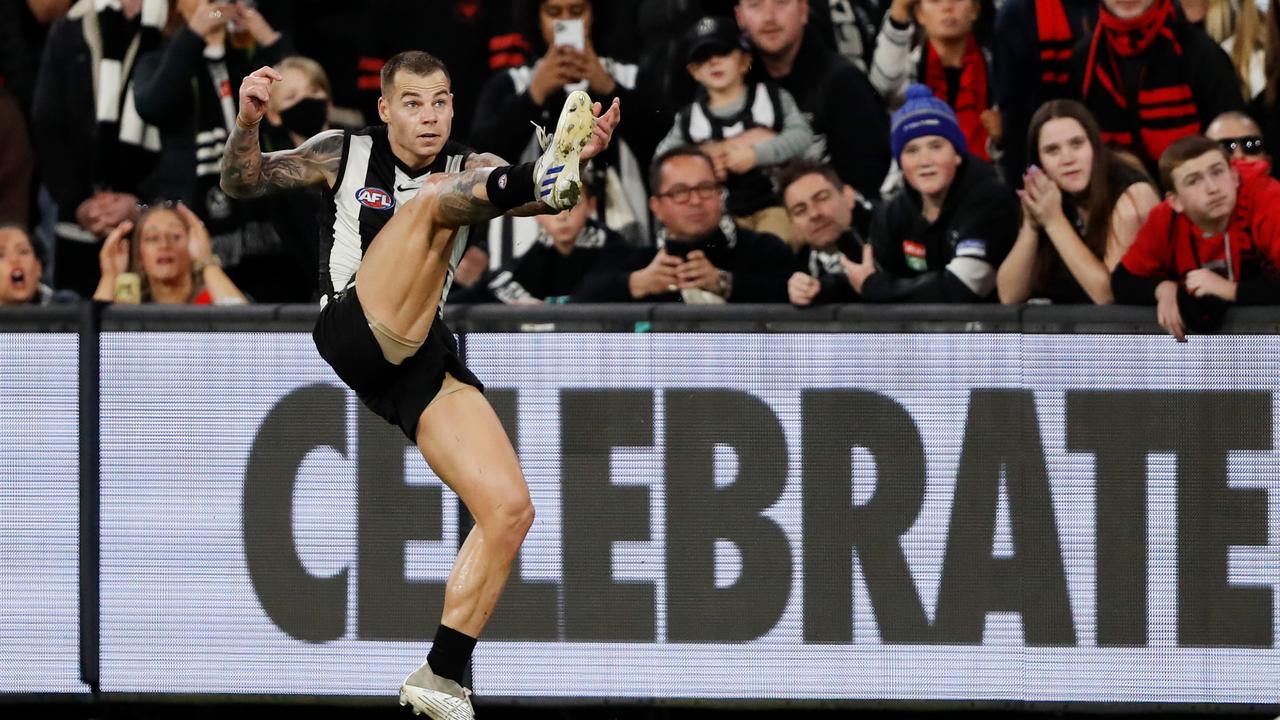 Essendon players have vowed to learn form last Sunday’s shattering loss to Collingwood and Kyle Langford knows he needs to “kill the ball” next time he’s the last man standing in the backline after his role in the stunning final moments.

But his Bombers teammate Andrew McGrath said all the players had a hand in their diabolical final play after Langford and defender Jake Kelly missed a spoil on Magpie Jamie Elliott at the MCG last Sunday which allowed him to mark and kick an after-the-siren goal to record a stunning come-from behind win.

The Bombers reviewed the frantic final few minutes on Wednesday, having spent Tuesday looking the blistering opening from Collingwood in which they kicked the opening six goals before Essendon got out to, and surrendered a 20-point last quarter-lead.

McGrath said the Bombers had resolved to never let a “shattering” loss like that that happen again.

“We felt as though we were pretty set for that (Collingwood kick-in), unfortunately a few breakdowns occured in that play all at the same time and it’s definitely something we’re all feeling,” McGrath said at Tullamarine on Wednesday.

“We all probably had a moment in that play where we weren’t playing our role exactly right, but, again, you want to put yourself in those scenarios against really good teams and we’ll definitely learn from that and be better for it next time.

“Through challenging times you are forced to learn and forced to adapt and turn into a different version of ourselves.”

In the final minute, Langford surged back to be the “seventh” man in what ended up being an empty Essendon backline after a missed shot at goal from teammate Harrison Jones.

Langford said he’d “have a look” at what happened but knew what was needed in the future.

“It all happened very quickly. I was on the last line of defence, as we call it the seventh. Harry had that shot of goal … and it felt like 10 seconds it was all the way up and Elliot marked it,” Langford told RSN on Wednesday.

“My memory of it was someone was coming through the corridor, I think it was (Brody) Mihocek, so I had to be a little bit aware of him and obviously Elliott.

“I had Jake Kelly in front helping out a little bit. It was pretty good kick, 45m out, on the boundary line, to be able to finish that, credit to him.

“But I’ll have a look at that so when I am in that opposition again I can do better and kill the ball.”

McGrath insisted that the team were still thinking about how to stop a Collingwood kick-in in the event Jones missed, and they hadn‘t “switched off” thinking Jones was going to kick the goal.

“There was a lot happening in that moment, you expect teams to go down the middle most of the time, but our first priority was to set up the ground, to defend it and lock it in our forward half,” he said.

McGrath said it would be “unfair” to blame the loss on Jones.

“We all had moments in that last quarter, in particular, that we would want to have back,” he said.

McGrath said star defender Mason Redman would be a “last-minute call” for Sunday’s clash with North Melbourne after being subbed out against the Magpies with internal bruising and spending a night in hospital after coughing up blood.

Despite the heartbreaking loss, it continued a dramatic turnaround in form for Essendon.

After starting the year 2-10, they have beaten top-four aspirants Brisbane and Sydney, as well as top-eight hopefuls St Kilda and Gold Coast.

McGrath said an adjustment in dialogue around the game plan has led to Essendon‘s uptick in form, and allowed them to showcase their “natural flair”.

“I think the players‘ comprehension of that has gotten better,” McGrath said.

“We‘ve got a lot more guys on the same page now than we did at the start of the year.”