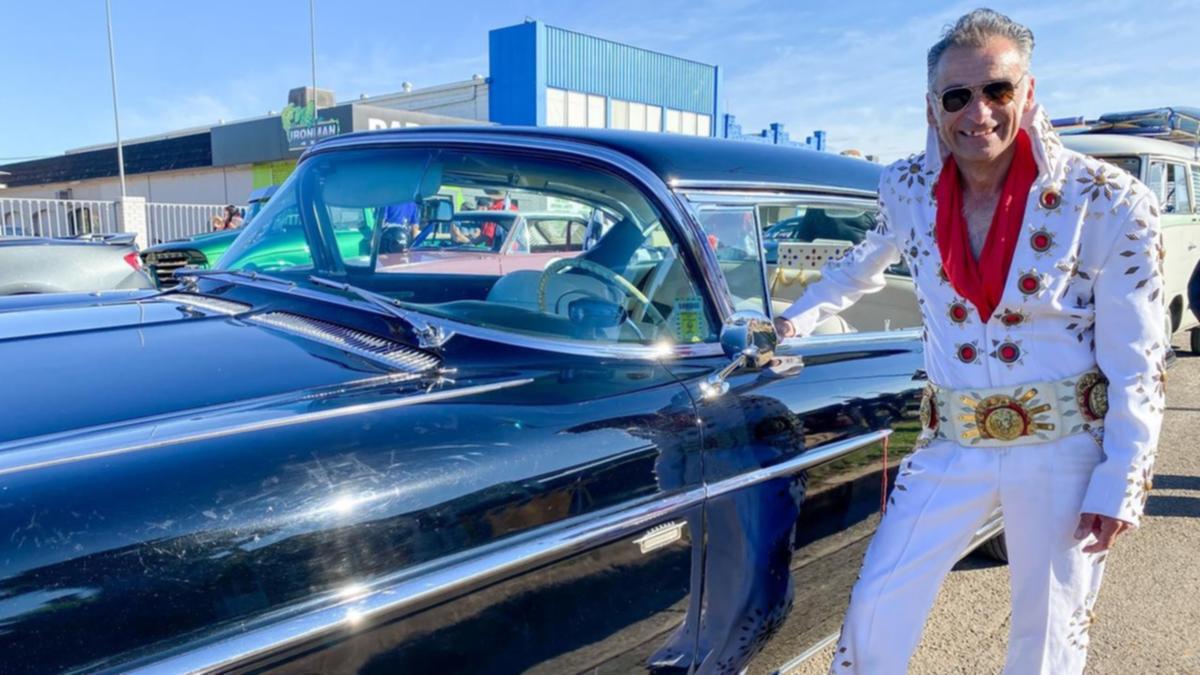 Dressed in a jewelled white jumpsuit, with his hair combed back Elvis-style, mechanic Charlie McCarter carefully buffs his black Cadillac.

“This is the problem with black cars. They show up dust,” Mr McCarter says, as he whips a red duster around his Coupe 58 at the Parkes Elvis Festival in central western NSW.

Hundreds of classic cars lined Parkes’ main drag for a street parade on Saturday morning, including a pink Cadillac with the bumper sticker: “Where the Heck is Memphis”.

Despite the 14,000 kilometre distance from Elvis’ Graceland home, fans have been gathering at the country town festival to honour his legacy for nearly 30 years.

“Elvis was a poor man from a poor family and all of a sudden he’s famous.

“He was a very big-hearted man. I want to carry that on.”

Thousands lined Clarinda Street to watch the parade of cars, in keeping with the festival’s theme of Speedway, the 1968 film starring Elvis and Nancy Sinatra.

Lookalikes revved their engines, sounded their blaring horns and one feigned his best southern drawl to call out “Elvis loves you baby” to a cheering crowd.

There was an Elvis on rollerskates and another sitting next to Marilyn Monroe’s doppelganger, while swing dancers twirled down the street, alongside a bewigged brass band.

Ms Latter said the fashion and the music brings back memories of childhood and good old-fashioned fun.

“There’s no badness or sadness about it,” she said.

“The kids are reviving it now, when we go dancing they’re doing the Jailhouse Rock.

“In the places we go, everyone’s happy, you don’t see any drunks, there’s no swearing, it’s just everyone enjoying themselves.”

Parkes local, Abagail Sharples, 17, is one in a new generation of Elvis fans.

Ms Sharples dressed as Priscilla Presley and drove her bright red 1989 Mazda convertible in the parade.

“I always listen to Elvis and Frank Sinatra and 60s era music.”

“I’ve just grown up around it.”

“Everyone was so silent before Elvis. They couldn’t move their hips, they couldn’t dance properly.