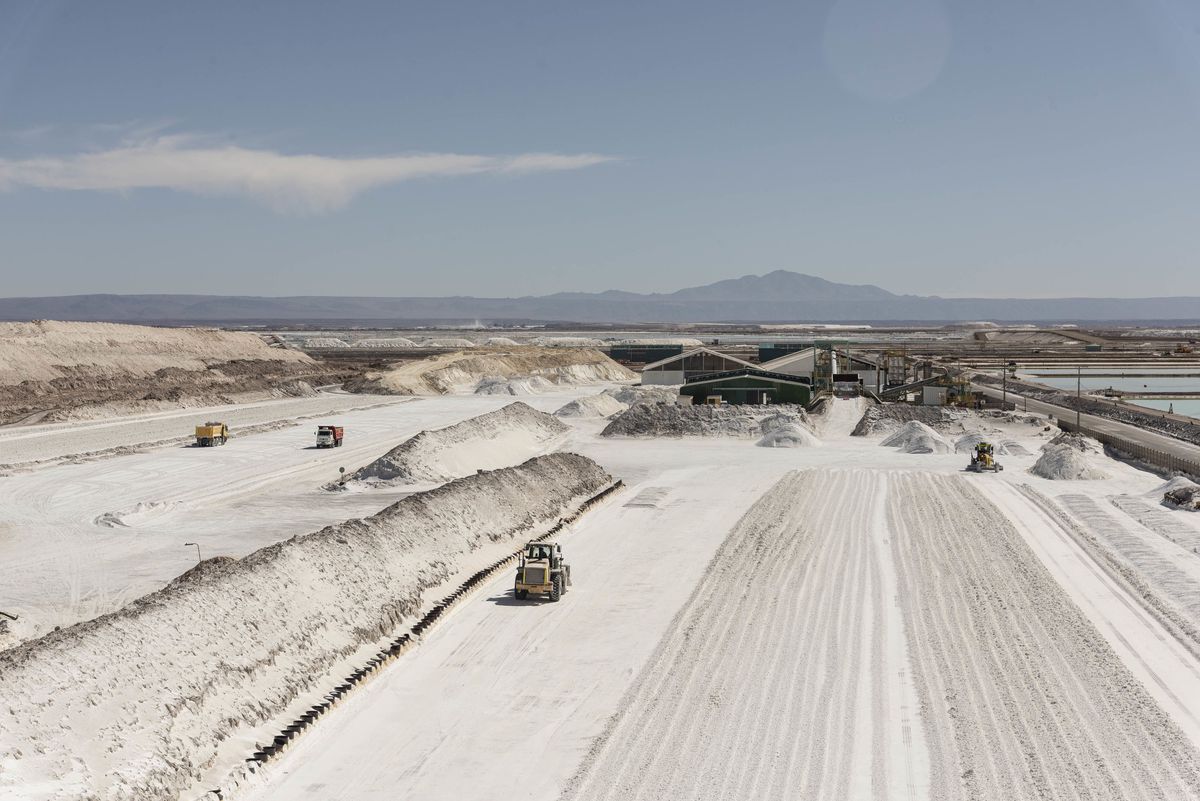 The economic outlook for Latin America is not great. Before the Covid-19 pandemic hit, the region was already losing momentum and multilateral organizations and analysts were warning that governments would have to change their policies if they were to boost development.

Lithium represents an opportunity to turn the region’s prospects around. A mineral with high electrical conductivity, it is essential for producing the batteries that will enable the world to cut its dependence on fossil fuels and migrate to cleaner renewable energies. Bolivia has the largest reserves in the world. The Bolivia-Argentina-Chile ” lithium triangle” accounts for 63% of the planet’s reserves. Peru and Mexico are in possession of a further three million tons or thereabouts. Lithium is, for big investors, the brightest star on the Latin American map.

The energy transition has come at a time when nationalism is on the rise in these countries. In recent months, efforts have been made to bring production under state control, a move that many citizens favor. Many others oppose it because of environmental concerns. Lithium is called “white gold” because of its market value and its silver hue. In English it is known as “white oil,” a subtle but telling difference. For Latin Americans, lithium is a precious mineral like gold and silver, both of which have been exploited in their region since colonial times. But in Anglo culture the mineral is viewed as an enhancer, a natural resource that will be transformed into something else, a step in the value chain.

The price of lithium on the international market rose approximately 80% in 2021, according to a Bloomberg index. Just four years ago, another analysis by Bloomberg predicted that by 2040 more than half of all car sales in developed countries would be electric vehicles. However, a more recent study by the consulting firm KPMG, published in November last year, cut this forecast by 10 years. According to KPMG, 52% of car sales will be electric by 2030. More than 1,100 auto industry executives in 31 countries estimated that the sector will undergo a “radical transformation” in the next five to 10 years.

The world is moving rapidly in this direction and the need for lithium feels urgent, as if the window of opportunity could close at any moment. For years, Chile has depended on private investment to extract and process the mineral. Chile’s president, Sebastián Piñera, who leaves office on March 11, announced the award of two production quotas of 80,000 tons of lithium each to two companies last month, one funded by Chinese capital and the other by Chilean capital. The announcement was controversial as the leftist president-elect Gabriel Boric won the election with a plan to create a national lithium company and implement a “new governance” of the salt flats containing the mineral’s reserves. Boric also promised that all communities in Chile, regardless of their location, would have access to water, a necessary resource for mining. Piñera’s contracts are now in legal limbo after being suspended by an appeals court.

The days of the current model might be numbered in any case. On February 1, Chile took an initial step toward nationalizing some of the world’s largest copper and lithium mines as Congress approved a proposal to give control to the state. The vote was part of the process of drafting a new Constitution. Currently, the Constitution prohibits the nationalization of these resources.

In Mexico, where reserves have the potential to exceed the US Geological Survey’s estimates of 1.7 million tons, President Andrés Manuel López Obrador has proposed something similar. As part of a bill to reform the energy sector, López Obrador is planning to nationalize lithium and create a state institution to control its processing. Unlike Chile, lithium production in Mexico has been limited to a single contract with a Chinese company, which to date, has not extracted a single gram of lithium carbonate. Experts point out that the government does not have the resources to create a state-owned company. Mexico is, therefore, idling in another kind of limbo.

In Peru, Pedro Castillo’s government is seeking to modify an existing contract with the Canadian company American Lithium Corp so that the mineral is exported with added value, according to a pro-Castillo lawmaker’s statements to local media. In other words, the state wants companies operating in Peru to do more than just extract and refine the lithium for export, but to also invest in factories to transform the lithium into a product with a higher market value, generating more and better-paid jobs.

Argentina is, to some extent, the exception. There, exploration rights are in the hands of the provinces and President Alberto Fernández’s government has sought to promote the country’s reserves worldwide. In 2020, Fernández set out to increase annual lithium carbonate production by 700% to 230,000 tons by the end of this year. This will require an investment of more than $1 billion by the private sector. During Fernández’s visit to China at the beginning of February, government officials revealed that Argentina is negotiating with the Chinese to establish new investments, including plans to set up a battery factory.

While Argentina is moving up a gear, Bolivia appears to be taking its time. Because of the unparalleled size of its reserves, this is the country that investors have the keenest eye on, but the mineral has already generated conflicts. In 2019, President Evo Morales announced that the German company ACI Systems would invest nearly $1.3 billion to exploit a large slice of its lithium reserves. Just weeks later, a major political crisis paralyzed the negotiations and Morales was forced to flee the country.

In July 2020, a Twitter user confronted Elon Musk, head of leading electric vehicles manufacturer Tesla, claiming that the “US organized a coup in Bolivia” just so that Musk could have access to the country’s lithium. “We will coup whoever we want! Deal with it!” replied the entrepreneur in a tweet that soon disappeared; the only remaining record of it are screenshots in newspaper reports. The quip gave Morales the perfect hook to link the control of lithium to his administration’s demise. Last year, during a visit to Mexico, the former president argued that the mineral should be in the hands of individual countries rather than the private sector. “We decided, as a country, to industrialize lithium,” he said in statements in which he also criticized Tesla. “We hired experts… and we started the great industry and then came the coup. American congressmembers have recognized that the coup was over lithium.”

In November 2020, Luis Arce, an ally of Morales, became president of Bolivia and embarked on a different approach. First, he organized a public event, a kind of fair, to attract domestic and foreign enterprises interested in investing. Subsequently, eight companies from the US, China, Russia and Argentina were selected and allowed to pilot test the extraction technology. In April, a technical group from the state-owned Yacimientos de Litio Bolivianos is expected to decide which companies should receive contracts. Among the factors to be considered are mineral recovery percentage, environmental impact and community protection, explains Diego von Vacano, a professor at the Texas A&M University in the US and an informal advisor to Luis Arce’s government.

According to Von Vacano, the technical group is independent and made up of professionals in the field, two indigenous women and two men. Lithium mined from brine, as is the case in Bolivia, has a lower impact on the environment than lithium mined from solid sediment, as is the case in Mexico. However, it is still mining, which affects the ecosystem. “Bolivia does not want to repeat the mistakes that have been made; for example, the damage to the environment seen in Chile,” says Von Vacano.

While Argentina is moving up a gear, Bolivia appears to be taking its time

“Throughout the history of colonialism, specifically with regard to mining, literature often describes mines as dead or uninhabited landscapes, devoid of life – a concept that in Latin is called terra nullius, or, no man’s land,” says Thea Riofrancos, an associate professor of political science at Providence College, Rhode Island, in the US. “In fact, that’s not the case.” Riofrancos recalls the first time she visited Chile’s reserves in 2019. “I was amazed by the desert in many ways,” she says. “The salar [a salt-encrusted depression] is like a grayish-white expanse that stretches as far as the horizon and seems endless. There are flamingos, and, if you’re lucky, you can see beautiful birds of prey.”

The Atacama Desert in Chile is incredibly arid and has high levels of ultraviolet radiation. According to a group of academics, it is “one of the harshest environments on Earth” and could hold the key to surviving global warming. In a paper published in the journal Proceedings of the National Academy of Sciences of the United States of America in November, a group of 27 scientists advocated preserving the desert to conduct scientific research, pointing out that “as a natural laboratory, Atacama is unparalleled for studying plant adaptation to extreme environmental conditions.”

Historically, the southern hemisphere has provided the global economy with its raw materials, though its people have not benefited, says Riofrancos. “The case of Bolivia is extremely dramatic because the origins of Spanish imperialism lie in the Potosí mines,” she explains. “The country has provided the world with minerals from silver to tin, as well as natural gas and agro-exports and now the prospect of lithium.”

Perhaps that is why the Arce administration is handling the progress of the pilot program with discretion. Bolivia’s Ministry of Hydrocarbons and Energy did not respond to questions from EL PAÍS about the estimated potential of this industry in terms of gross domestic product. Revenues will be subject to price fluctuations on the international markets, which is why there is already talk in Argentina and Bolivia of creating a lithium cartel similar to the Organization of Petroleum Exporting Countries (OPEC), which imposes production quotas to prevent oil prices from plummeting.

“We are working against the clock,” says Von Vacano, who adds that “it is urgent to push lithium faster” because, otherwise, investors will look to sink their money into other countries. The revenue gained from lithium can be plowed back into local communities as is done in Norway and Qatar, Von Vacano points out. “This can be very positive. It can be a royalty model that benefits not only the regions of Potosí and Uyuni but also the rest of the country. This is money that can be used for education and health. It could transform the country completely.”