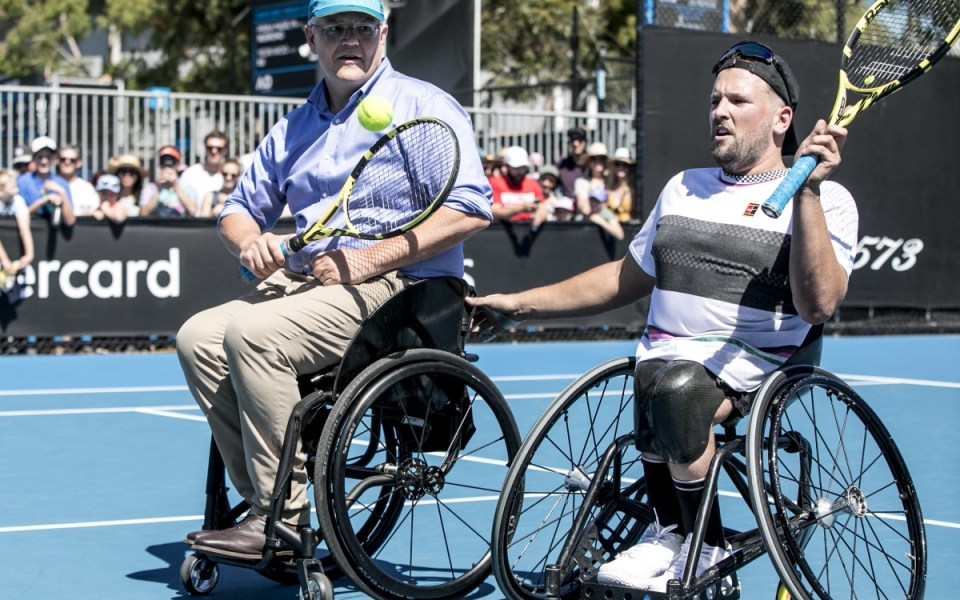 Australian of the Year Dylan Alcott has blasted Prime Minister Scott Morrison’s comment about being “blessed” to have children without disabilities.

“Woke up this morning feeling very blessed to be disabled – I reckon my parents are pretty happy about it too,” he tweeted.

“Feeling sorry for us and our families doesn’t help. Treating us equally, and giving us the choice and control over our own lives does.”

The response came amid the fallout from Mr Morrison’s comments during Wednesday night’s first leaders’ debate in Brisbane, when he and Opposition Leader Anthony Albanese were asked about the future of the National Disability Insurance Scheme by an undecided voter, the mother of an autistic child.

“[My wife] Jenny and I have been blessed, we’ve got two children that don’t – that haven’t had to go through that,” he said.

“So, for parents with children who are disabled, I can only try to understand your aspirations for those children.

“Then I think that is the beauty of the National Disability Insurance Scheme.”

Labor’s finance spokeswoman Katy Gallagher said the comment was insensitive and hurtful to parents and children with a disability.

“As the parent of a wonderful daughter with autism, I was really upset by that comment. I found it really offensive and quite shocking,” Senator Gallagher told the Seven Network on Thursday.

“People who have a disability, children with autism, it is a kind of response they get all the time that people are blessed not to have what they have when in actual fact, every child is a blessing.”

The comments from Scott Morrison showed a lack of connection with everyday people, Senator Gallagher said.

“It may be a clumsy comment but they still are insensitive comments and can offend people. Maybe he can front up today and explain what he meant by that,” she told Sky News.

“Part of the battle we are up against is that our children are less or not as good as others and that simply isn’t the case.”

Mr Morrison defended responded to the backlash during an interview on Sydney radio on Thursday, saying it was “poor form” to twist comments made in good faith into something political.

“I was just simply saying that. It’s tough. And I’m grateful that there is these hardships that I and Jenny haven’t had to deal with,” he told 2GB.

Senior Liberals also defended Mr Morrison on Thursday. Finance Minister Simon Birmingham said the comments were in relation to not having to deal with the complicated NDIS bureaucracy.

“The Prime Minister actually in that context was talking about the not having to deal with the many challenges of systems that you have to work through to get the support,” Senator Birmingham told the ABC.

“I think he was expressing the type of sentiment many Australians would understand.”

“To be honest, I did not think of anything of them at all. I certainly didn’t take anything negative away from it,” she told the ABC.

Senator Hughes said the anger had been misplaced by people who were against Mr Morrison.

“I know there were days, very early on when my son was younger, that were really, really hard. I didn’t feel particularly blessed.

“We have a much higher suicide rate within the autism population. We have a higher unemployment rate than the general disability population. There are issues we can be angry about.”

Mr Morrison continued his campaign in Brisbane on Thursday following the leaders’ debate, spruiking a plan to make life easier for Australians in outer suburbs.

Meanwhile, Mr Albanese was on the NSW south coast, in the electorate of Gilmore, after claiming a narrow win from the first leaders’ debate.

During Wednesday night’s televised debate, Mr Albanese won more of the support from the group of 100 undecided voters.

The two leaders traded blows over stances on boat turnbacks after Mr Morrison accused Mr Albanese of being inconsistent on the issue.

Both leaders received questions from the audience on a federal integrity commission, support for small business, and housing affordability, as well as trust in politics.