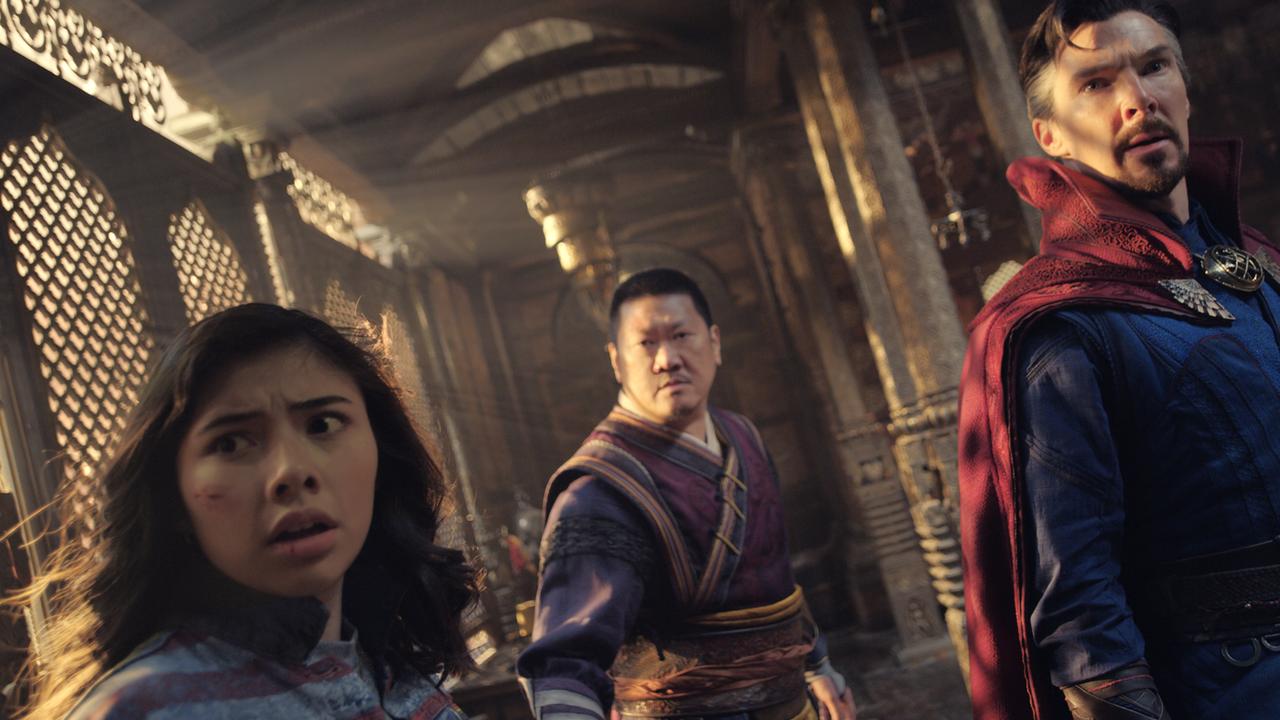 It wouldn’t be a Marvel movie if it didn’t also reference the expanse universe – nay, multiverse – of all those superheroes.

You can’t accuse Doctor Strange in the Multiverse of Madness of not doing enough. This is a movie that has thrown everything in, and then some.

And while the emotional arcs of Stephen Strange’s happiness and Wanda Maximoff’s burning desire to be with some version of her kids are the film’s main thrust, what Marvel fans are going to be talking about are those jaw-dropping cameos in the middle act.

We all know the Marvel Cinematic Universe movies and streaming shows are interconnected and Doctor Strange in the Multiverse of Madness doesn’t disappoint when it comes to contextualising itself as part of a larger tapestry.

And that tapestry has been infinitely expanded thanks to the MCU’s veer into the multiverse. Where there’s a multiverse, there’s endless possibility.

So when Strange (Benedict Cumberbatch) and America Chavez (Xochitl Gomez) wind up in an alternate universe – Earth 838 – they find themselves in a world where a different version of Mordo (Chiwetel Ejiofor) drugs and detains them.

Here, Strange is brought before the Illuminati, a panel of superheroes who will decide his fate. Some of them are familiar faces to Strange but in a different role while others are newbies altogether.

Their presence here could have consequences for the MCU or maybe it’s just a fun easter egg for devoted fans.

If you were paying attention to all the WandaVision fan speculation during the streaming series’ run in 2021, you may have heard John Krasinski’s name linked to Reed Richards, one of the Fantastic Four. He’s the stretchy one.

Marvel fans were convinced Reed Richards (and Krasinski) was going to show up as Monica Rambeau’s “scientist” friend. When he didn’t, everyone promptly forgot about that two-week obsession.

Well, the rumours of Krasinski’s casting were onto something because here he is, as a version of Reed Richards. He doesn’t survive the movie but you can be pretty confident that Krasinski will be back. You don’t hire Krasinski for a winky cameo without setting him up as a significant character in the MCU’s Phase Four.

Plus, it’s a nice full circle moment for Krasinski who was in the running to play Steve Rogers all those years ago, a role which, of course, went to fellow Bostonian Chris Evans.

Rights to the Fantastic Four came back to Marvel Studios’ stable when Disney acquired 20th Century Fox, and Marvel boss Kevin Feige confirmed in 2019 that a movie was in the works, rebooting the superheroes once again after two previous runs in 2005 and 2015.

Spider-Man director Jon Watts was originally attached to direct but is reportedly no longer involved.

Patrick Stewart’s casting in Doctor Strange in the Multiverse of Madness was perhaps less of a well-kept secret given his distinctive voice is heard in the trailer.

The presence of Professor X in the MCU means the X-Men is definitely coming – or they’re already here or somewhere in the multiverse.

Like the Fantastic Four, the rights to X-Men was returned to Marvel Studios in the Fox acquisition and now one of the most popular comic book franchises will be part of the already sprawling MCU.

Given how many iconic characters there are in the X-Men, it’s a transition/introduction that needs to be carefully managed so as to not overwhelm too quickly. But we know Feige can be both disciplined and methodical in how he charts the MCU.

A multiverse variant of Professor X is the closest thing you can get to a soft launch.

Even if you hadn’t seen the Captain Carter episodes of What If, the animated Disney+ streaming series which explored the possibilities of the multiverse, it’s a pretty easy leap to understand that on Earth 838, Peggy is the one who was injected with the super soldier serum and wields the Union Jack-ed vibranium shield.

This Captain Carter probably isn’t the What If Captain Carter but it does mean there are multiple universes in which Peggy took on the role traditionally occupied by Steve Rogers.

If the multiverse allows for Hayley Atwell’s continued presence in the MCU, then how can anyone complain about that.

Also, while we have you, if you’ve never seen Agent Carter, the two season series which follows Peggy after World War II, do it. It’s wonderful and it’s streaming on Disney+.

On Earth 616, the designation for our world and the one we’ve all been watching so far, Maria Rambeau is dead, having succumbed to cancer during the five years in which her daughter Monica had been snapped away.

But before the fighter pilot died, she had founded SWORD, an organisation focused on galactic threats.

On Earth 838, not only is she very much alive, she’s Captain Marvel, with all the might and powers bestowed on Carol Danvers in our universe.

In the comics, Maria never took on the mantle of Captain Marvel but Monica did, so it very much runs in the family, even across the multiverse.

Perhaps the last character you expected to show up as an Earth 838 variant is Black Bolt given how few people remember there was an Inhumans TV show. And for a while, it seemed that Marvel preferred to keep it that way.

Before Marvel’s TV and film arms were merged under Feige, the TV properties were run out of a different department under Jeph Loeb.

For the most part, even though there were references to MCU movies, such as on Agents of SHIELD, it only flowed one way. So, after a while, it was looking as if none of the TV shows including the Netflix ones, were part of the MCU canon.

One of those shows was Inhumans, a wildly unsuccessful eight-episode series which followed an alien race called inhumans whose royal family escaped to Earth after a coup.

Black Bolt is the king of the inhumans home planet, Attilan. His power is his killer voice, which is fatal if you hear even a whisper.

The inhumans are also associated with terrigen mists, a compound which awakens powers in certain humans if they are exposed. Terrigen mists, which was name-checked in Doctor Strange in the Multiverse of Madness is not yet part of the MCU, until now. It was an extensive plot point in Agents of SHIELD.

In the comics, terrigen mist is how Kamala Khan/Ms Marvel’s powers were triggered but it’s not yet known if that will be the origin story for the MCU version, which is to make her debut in the Ms Marvel streaming series next month.

It’s not clear if Mount’s casting as Black Bolt means Inhumans – and most of the previous Marvel TV shows – is now canonical in the MCU or if it was just an easter egg for Inhumans’ small pool of fans.