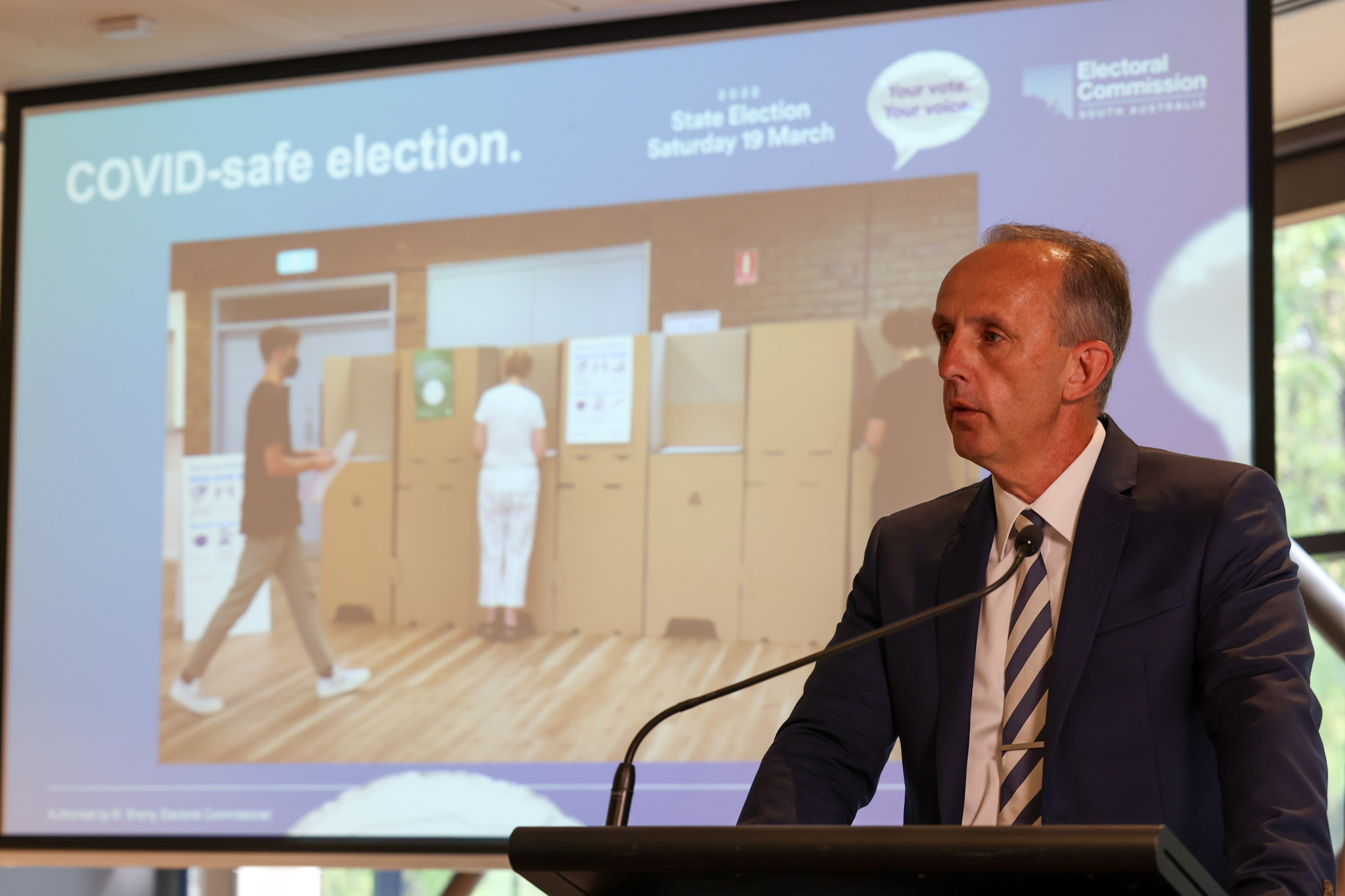 State authorities have been under pressure to ensure that every eligible elector is able to vote, amid concerns thousands of people isolating under emergency directions as COVID patients or close contacts would be unable to cast their ballots.

Electoral Commissioner Mick Sherry this morning revealed that voting packs would be made available at 22 PCR or Rapid Antigen Testing sites across the state, “allowing close contacts and COVID-19 impacted individuals to vote safely”.

People forced into quarantine during the postal voting period that ends on Thursday March 17 – two days before polling day – can apply for a postal vote to be delivered to their home.

After March 17, people unable to vote in person at a polling booth can register to collect ballot papers from one of the earmarked sites.

“You will be sent a message about a particular site to attend, you’ll attend the nominated site, collect your ballot papers and return to your home to fill it out by 6pm on polling day and then return it by Australia Post, so it can be included in the count,” Sherry told reporters.

He said the solution – an Australian first – was in addition to a range of COVID-safe measures employed in polling stations around the state, with booths modified to facilitate social distancing, hygiene officers deployed to maintain sanitation, all electoral officers to be fully vaccinated and mask-wearing mandatory for all staff and voters.

“All eligible electors should be able to feel safe coming to vote in the upcoming state election,” Sherry said.

“If you feel safe going in to a petrol station to buy your petrol or going into a supermarket to buy your groceries, you can absolutely feel safe coming into a polling place.”

However, the outcome of the election could take days to determine, with Sherry revealing there were around “18,000 South Australians who have currently applied for a postal vote – that compares to 4000 at the same time in 2018”.

“We are planning for and anticipating a significant increase in the number of early votes and postal votes for this election,” he said.

“Postal votes and early votes are what we call declaration votes and they are not counted until the Monday after polling day… as a result there is a likelihood that we may not know the result of some electoral districts until several days – maybe up to a week – after polling day.

Asked whether he would have preferred electoral reform giving him the ability to count early votes sooner, the Commissioner said: “I can only operate within the legislation provided to me currently, and we’ll proceed on that basis.”

“My focus is on delivering this election within the framework provided to me,” he said.

He is similarly unable, under the Act, to encourage electors to lodge pre-poll and postal votes, saying: “The legislation requires me to encourage people to vote in a polling place on polling day.”

“However, the legislation also advises if you cannot attend a polling place on polling day you can vote early or you can vote by post,” he said.

The potential disenfranchisement of thousands of COVID-impacted South Australians – about which Sherry had warned MPs several months ago – prompted an extraordinary protest in State Parliament last week, with Labor and crossbench MPs taking their seats in the Lower House to call on Premier Steven Marshall to recall parliament and legislate a solution.

However, Sherry confirmed at the time that the suggested fix of telephone voting could not be logistically implemented at this late stage, even if it was allowed by legislative change.

“I can only operate within the legislation provided to me,” he said today.

“We just got on with the job to look at whatever solutions we could find to ensure every South Australian can vote and vote safely.”

Asked what he made of the political standoff, he said: “I just got on with the job delivering the election.”

Parliamentary Speaker Dan Cregan, who had lobbied Marshall to recall parliament, said in a statement today: “The strong advocacy of Independent members has put a real spotlight on this important issue and I’m pleased that action is being taken.”

“However, any amendment to voting rights should always be made by parliament and not through using emergency powers,” he said.

Marshall, however, declared the Commissioner’s solution – delivered in collaboration with SA Health, SA Pathology, SAFECOM and SAPOL – “an excellent plan that will actually deliver every single eligible voter the opportunity to vote in the upcoming state election”.

“This is not just for people who are cases but also close contacts in quarantine – but also if you wake up on election day with a sore throat or a runny nose, and you think ‘I’ll just zip down to vote and ignore it’, you do have the option of getting online and applying and being able to pick up your own ballot paper at a RAT or PCR collection site,” she said.

“And then you can get your test done at the same time, and go home safely and keep everyone else safe.”

He said aged care facilities would be able to make arrangements for bulk distribution of postal votes to residents, while arguing remote Aboriginal communities had seen a 12 per cent increase in participation at the last election and insisting “we’ve made a commitment” to ensure that continued.