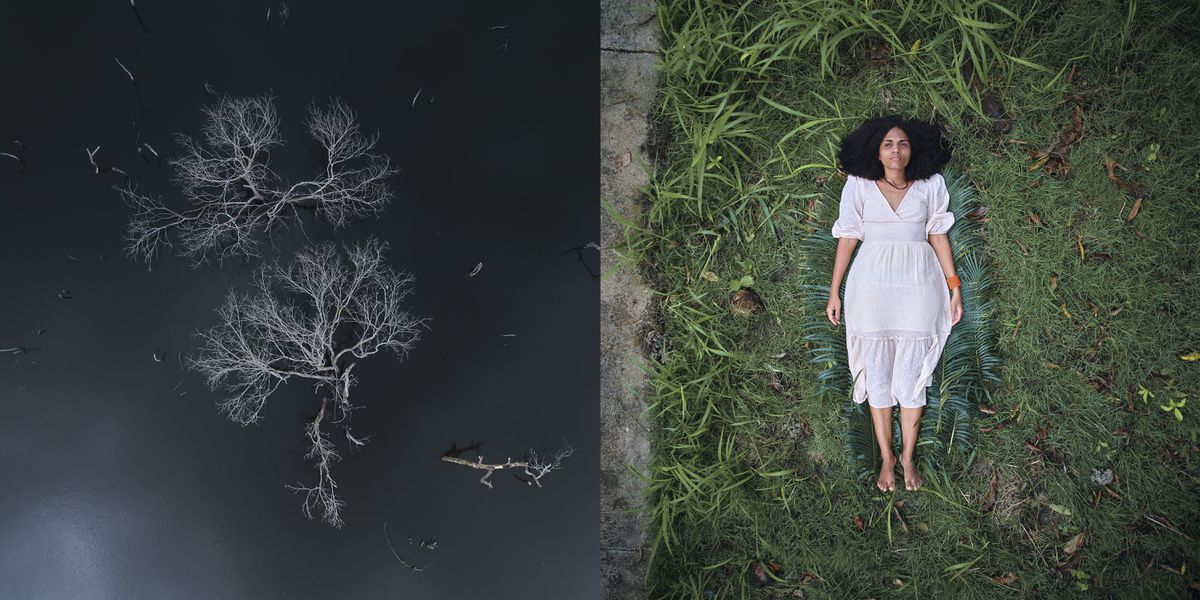 “Belo Monte is dead!” Daniela Silva cries. She holds a poster handwritten with the same phrase, and she places it on the site that the hydroelectric giant, on Brazil’s Xingú River, has designated for the public to admire and photograph the monumental piece of infrastructure.

Forty kilometers from the city of Altamira, alongside the highway, large white three-dimensional letters proclaim, “Photograph Belo Monte.” The command demonstrates the arrogance with which the company planted itself in Xingú. This is one of the major tributaries of the lower Amazon, in the Brazilian state of Pará. The construction of the hydroelectric plant violently disrupted the river ecosystem, and it profoundly marked the lives of locals who lived alongside the river.

The plant’s construction unleashed a socio-environmental catastrophe whose consequences are still difficult to comprehend. The families expelled from their homes, lands and islands call it “Belo Monster.” The piece of infrastructure destroyed the habitat of a vast area known as Volta grande do Xingú, as well as the lives and futures of the communities on its banks.

More than 14,000 people were displaced from the surrounding land, among them the family of Daniela Silva. They were resettled in small, recently built houses known as “ruquis” (Reasentamientos Urbanos Colectivos, or Collective Urban Resettlements), far from the river and from the center of the city. “Before, there was a really strong sense of community,” says Dani, as she is known in the city. “When we were little girls, we played together in the streets, and the community took care of us while our parents went out to work or fish in the river. We belonged to the river, to the forest. We were happy. We were rich.”

Between 2011 and 2013, 45,000 workers came to the region to construct the plant. Their arrival forever disrupted the social cohesion of the small Amazonian city. The resettlement of the locals destroyed the riverside communities, leaving them in a tree-less clearing too far from the city center to arrive on fit.

The families lost their jobs. The canoes were left without water. The communities could no longer fish. The islands flooded, and trees drowned and died, leaving a desolate landscape. “Before I had a live river. Now I have a dead lake,” said Raimundo Berro Grosso, a neighbor of the river, cited in journalist Eliane Brum’s recent book about the Amazon, Banzeiro òkòtó.

“Now we are poor. To be poor is to not be able to choose. To be poor is to beg for gasoline to go to the city center. It is to need money to buy a mango in the supermarket,” Silva continues, recounting how the catastrophe devastated her family. Her father lost his job as a brickmaker. One of her brothers was shot in the back and killed by the police, and another died by suicide. In front of the abandoned lot where her home once stood, in a neighborhood where she once had strong community ties, Silva is overcome by tears. “Belo Monte pushed the people into misery. It ripped us out of our homes, and it didn’t give us any tools to rebuild our lives. That can never be replaced. Being poor, being miserable, is to not remember where we came from.”

Hundreds of families were torn apart by the project conceived during the country’s military dictatorship, from 1965 to 1985. That period also led to the overexploitation of the jungle and the Trans-Amazonian highway, which became the needle of an enormous syringe used for massive, systemic extraction of the resources of the tropical forest that today is in ruins.

The hydroelectric plant was inaugurated twice, once by president Dilma Rousseff in May 2016, when the first turbine began operating, and again by president Jair Bolsonaro in November 2019, when the 18th and last turbine began. It represents the extractivism that has dominated Brazilian politics, on the left and right, for decades. Belo Monte was part of a project that involved a system of up to eight dams throughout the rivers of the lower Brazilian Amazon. Today, only one of the 18 turbines is functioning, demonstrating the hubris of a project that failed to produce the 11,000 megawatts of “clean sustainable energy” still advertised on signs around Altamira.

The project had generated great opposition among indigenous and riverside communities in the 1980s. As a consequence, the World Bank withdrew its funding. But 20 years later, the project was revived, and although the opposition was active, the construction moved forward, promoted by the governments of the Brazilian Workers’ Party (PT). Since the project was first announced, a series of female activists in Altamira, includingMónica Brito, Antonia Melo, Francineide Ferreira and Raimunda Gomes, led the charge against it. The women inspire Daniela Silva, who, in the words of Eliane Brum, “invents herself as a warrior.”

The jungle is often compared to a violated woman’s body. It corresponds to the predatory conceptions of the Amazon shared by many Brazilians, particularly Bolsonaro and his followers. Brum affirms that “being a woman is being a Xingú violated by Belo Monte. It is being a burned tree when the smoke covers the Amazonian sun to hide the horror of the crime.”

Silva’s fight fits squarely into this powerful image of the disaster in the Amazon basin. It is rapidly approaching a point of no return: when deforestation reaches 20%, the ecosystem will turn the current tropical forest into an immense savannah. Silva puts her body on the line against this dire threat. She participates in several anti-deforestation initiatives, and she works to strengthen civil society to confront the landowners who drive their arrogant trucks through Altamira, a once-Amazonian city that Belo Monte devastated and turned into the most violent in all of Brazil.

Silva is aware that her fight for Altamira is also a fight for the Amazon and for the entire planet, whose future is being destroyed on a daily basis. “Fighting for the Amazon today is not an isolated fight. Defending the Amazon, the jungle, is defending life. We are not here preventing the development that they talk about. When they build a hydroelectric plant in a sacred river like the Xingú, it is not only the Xingú who dies, along with the people, but it is a domino effect. It falls, it falls, it falls…and po”

This article belongs to the series Rainforest Defenders, a project by openDemocracy/democraciaAbierta, and has been carried out with the support of the Pulitzer Center’s Rainforest Journalism Fund.