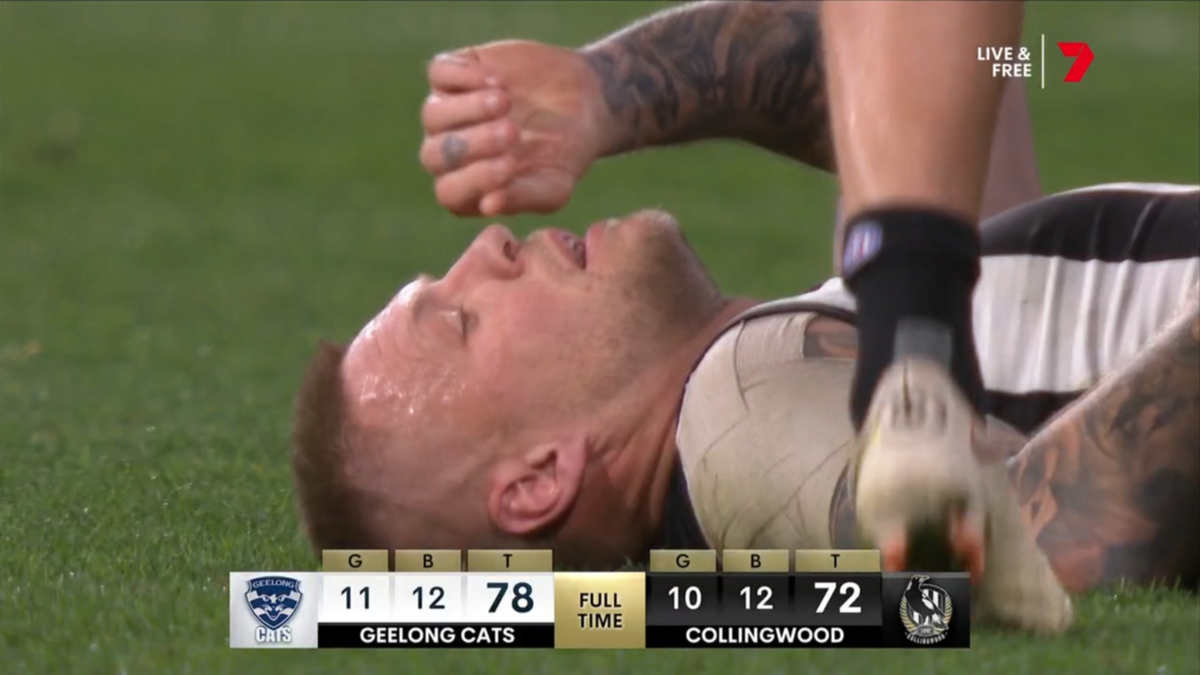 Collingwood coach Craig McRae has caused a stir after calling out his players for ‘acting like a loser’ by sinking to the turf after Geelong came from behind to secure a berth in the AFL preliminary finals.

WATCH IN THE VIDEO ABOVE: Craig McRae’s stern message over players’ ‘loser’ act

“Geelong are through to a prelim in one of the best finals you will ever see,” Channel 7 commentator James Brayshaw said.

Max Holmes kicked the winning goal but it was the under-fire Gary Rohan who stood up throughout the night and late in the game.

The former Sydney Swans player kicked three goals – including a set shot from 50m that briefly put the Cats ahead in the fourth – and laid on the crucial assist for Holmes’ winner in the goal square.

Geelong star Jeremy Cameron told 7NEWS after the game that he thought Rohan was “awesome”.

“We know what he brings in each and every week. He flies, he doesn’t gather a hell of a lot of possessions every time [but] what he brings is enormous for us,” Cameron said.

“(He creates) a contest, he has chase-down pressure because he so quick, he plays like a tall and small. He’s got a couple of crucial roles for us. I’m happy for him.”

Cameron kicked three goals for the Cats himself, with Brad Close snaring two and Mitch Duncan and Tom Hawkins kicking one apiece.

The Cats will host Melbourne or Brisbane at the MCG in two weeks’ time to decide who progresses to the grand final.

The Pies will feature in a semi-final next week against Fremantle or the Western Bulldogs for the right to play Sydney in the other preliminary final.

With Collingwood still in the running despite a rare defeat in a tight game, senior coach Craig McRae admonished Pies players who slumped to the turf in defeat.

“We want to act like winners. The siren goes and there’s half a dozen guys laying on the ground,” he said in his post-match press conference.

“For me that’s not a winner. That’s acting like a loser. We lost a game, we’re not losers.

“We’re here to win this thing. We’ll give it everything we’ve got.

McRae said he delivered that message to his players in a post-match address, reminding them there is no need to sink to the turf – barring defeat in a grand final.

In a horror blow for Collingwood, Taylor Adams suffered what appeared to be a suspected serious groin injury in his return from a similar injury.

“He’s torn the groin off the bone, I think,” McRae said.

Jordan De Goey offered some hope for the Pies’ ability to contend without Adams after putting together a stellar 26-disposal, two-goal effort that also featured eight clearances and a goal assist.

WATCH IN THE VIDEO BELOW: Max Holmes kicks match-winner for Geelong

Duncan, meanwhile, said Collingwood brought “exactly what we thought” to the game but containing it was another issue.

“So proud of our group, the way we stuck fat and came away with the chocolates in the end,” he said.

The veteran was tapped on the shoulder to go forward, saying it was not part of an agreed plan but was a contingency.

“We kind of always had it up our sleeve if things weren’t going our way or we wanted to look for something a little bit different,” Duncan said.

Geelong young gun Tom De Koning praised his side for adapting after Jake Kolodjashnij was substituted out of the game in the first half due to a knee injury.

“That was unfortunate that Kolo went down but Mark (O’Connor) came on and filled a role, he did a great job,” De Koning said.

De Koning conceded the Cats – who finished two games clear of the field on top of the ladder – had a lot to work on before the preliminary final, and his coach agreed.

“I don’t think either team hit any great heights in terms of the way they played, but gee they played with some heart,” Chris Scott said.