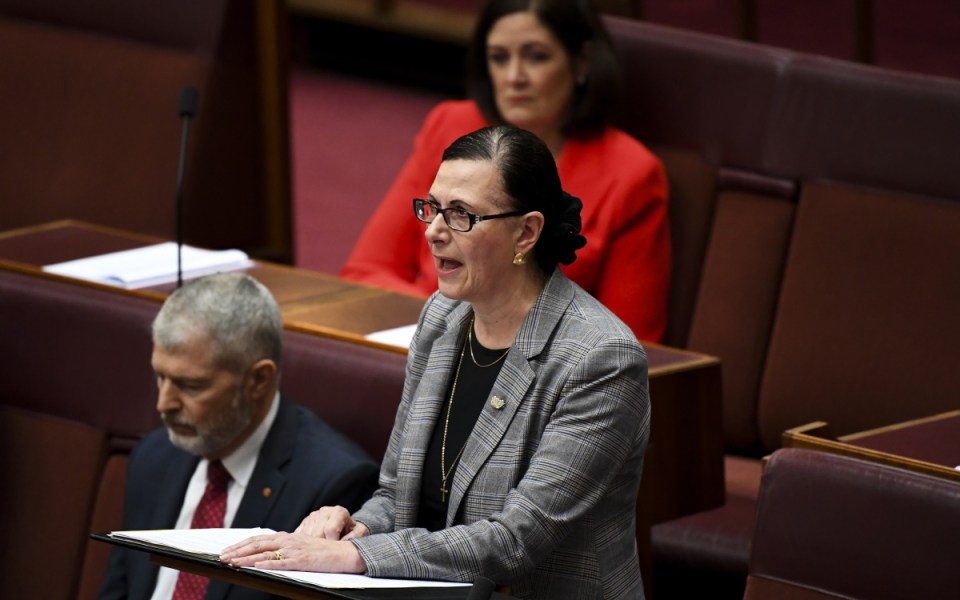 Dumped NSW Liberal senator Concetta Fierravanti-Wells has taken aim at bullying within her own party, drawing parallels between herself and the late senator Kimberley Kitching.

Senator Concetta Fierravanti-Wells seized on reports Senator Kitching was ostracised by “mean girls” within her own party to criticise Liberal women.

“Much has been written about the treatment Kimberley had received by what has been described as the mean girls. Like Kimberley, I too had experienced the Liberal party sisterhood,” the Liberal senator told the Senate during a condolence motion.

“I shared my own experiences with Kimberley, so I understood how Kimberley felt having been treated the way she was.”

Senator Concetta Fierravanti-Wells shared her frustration with internal party machinations after she was relegated to an unwinnable spot on the NSW Senate ticket at the weekend, ahead of the federal election.

Her outspoken nature had put her at odds with senior members of her own party, she said.

“We both had factional enemies who desperately wanted to see us defeated and they worked very hard at it. We were both outspoken and not constrained by prevalent groupthink within our political parties.

“Like Kimberley, my comments on China drew the ire of Coalition leaders and ministers. When I first raised my prescient warnings in 2016 during my time as a minister, they were ignored.”

Senator Concetta Fierravanti-Wells said female Liberals wouldn’t speak out of turn for fear of being demoted.

“Sadly, I note my female Coalition colleagues would privately whinge and complain, but there had been no fortitude or appetite to stand up publicly and say what needed to be said,” she told the Senate.

“I expect they were concerned about being summoned for a fireside chat with the threat of demotion for breaching groupthink.”

Not one female MP reached out to her following her comments about integrity and demanding a higher standard of conduct on the ABC Four Corners program in late 2020, she said.

“After I made those comments, not one Coalition female supported me. Not one had the gumption to say, well done for speaking out.

Earlier, Labor senators led tributes to Kimberley Kitching at the special sitting, which followed her sudden death aged 52 from a suspected heart attack in Melbourne on March 10.

Labor’s leader in the Senate Penny Wong said the late senator was an extraordinary woman and a patriot “determined to serve her country”.

“As the many tributes since her death have demonstrated, Senator Kitching was a parliamentarian who worked across the political spectrum, relentlessly pursuing what she believed was right,” Senator Wong said.

“She believed in democracy and its values, including human rights, she worked to shine a line on abuses and corruption around the world.”

Senator Kitching’s husband Andrew Landeryou and her close friend and secretary of the Health Services Union Diana Asmar watched on from the public gallery as senators paid tribute.

More than a dozen lower house colleagues, including deputy leader Richard Marles, Tanya Plibersek and Mark Dreyfus, sat in on the condolence motion.

Labor senator Kristina Keneally used her speech to criticise those who “politicised” Senator Kitching’s death after reports she was bullied emerged after her death.

“Those who use … the grief caused by her death for purposes other than honouring her life and her work, will find no friend in me,” she said.

“She was never to be underestimated, she made her own decisions, she was not manipulated by others in her career, her beliefs, or her passions.”

Senators Wong, Keneally and Katy Gallagher were named in the reports but have denied the allegations.