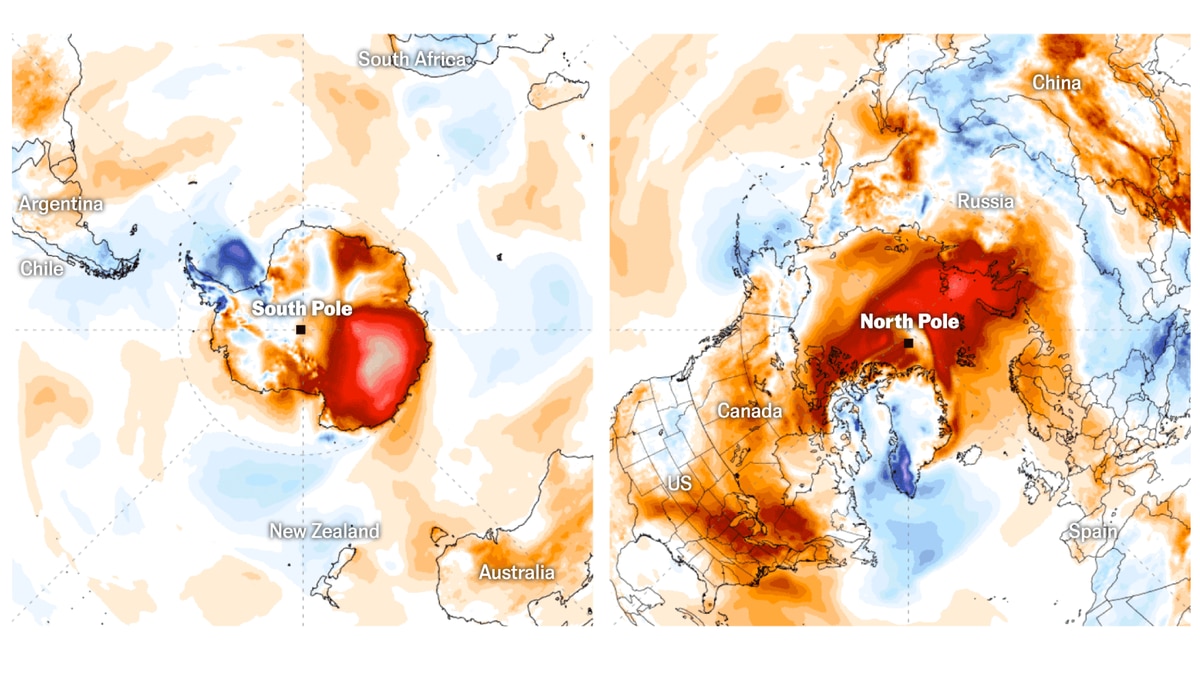 A few days ago, an unprecedented temperature record was noted in the Antarctic. The French-Italian research station Concordia, located over 3,000 meters above sea level on the Antarctic Plateau, the coldest place on earth, recorded a temperature of 40ºC above average. At this time of year temperatures of around -55ºC are usual, but on March 18 the mercury hit -12ºC. Cold, but not nearly as cold as would normally be expected. Although there was no ice melt, images relayed from the Sentinel satellite detected high temperatures on the Totten Glacier and its surrounding coastline, as well as darker snow, indicating older layers. Meanwhile, at the other extreme of the planet in the Arctic, a heatwave has been recorded with temperatures up to 30ºC higher than the March average, and in the absence of sunlight.

Both the Antarctic and Arctic are breaking temperature records and calling into question even the most pessimistic climate change models. By the end of the century, scientists forecast that the number of polar heatwaves will double in the larger part of western Antarctic and will treble in the vast interior of the eastern Antarctic, even in a moderate climate change scenario. These predictions have been published in Nature, and recent events have done little to counter them. In the Arctic, higher temperatures are also becoming more commonplace.

The consequences are well known: scientists predict catastrophic polar ice melt that will not only cause sea levels to rise across the entire planet, but will also disrupt ocean currents and, as a result, life as we know it by putting the fragile ice balance in the western Antarctic and the Arctic at risk.

“Generally, both pole surges are related to climate change, but they are not connected; it’s normal they have ended up coinciding in time because the in the Arctic they are increasingly frequent, but what is staggering is their breadth, especially in Antarctica. Forty degrees of difference over the average is a lot,” says scientist Raúl Cordero, from the University of Santiago, Chile, and one of the authors of the Nature paper.

Nor is this an isolated incident. Cordero notes that on January 7 a temperature of 11.4ºC was recorded at the Argentine Belgrano II research station, located in the Weddell Sea, and a month later, on February 8, another huge spike was recorded on the Antarctic Peninsula (13.7ºC at the South Korean King Sejong base and as high as 12ºC at the Ukrainian Vernadsky Research Base), which caused the collapse of an ice shelf measuring 3,800 square kilometers. Although these temperatures fall short of the record 18.2ºC recorded two years ago, the fact that this austral summer has seen the fewest ice floes in the region in 45 years, experts are not optimistic about the overall panorama.

“Heatwaves can cause significant ice melt and an increase in rain and snow. In the Antarctic interior, this means more snow, but on the coasts, it brings rain and melting, which is what is happening now. Looking ahead, more snowfall is expected but melting will also increase considerably more. These episodes, furthermore, increase the instability of the ice cliffs: the heat causes the snow to melt inside and when it refreezes it applies pressure to the walls and disintegrates them. All of this can accelerate the loss of ice mass. In Antarctica, forecasts predict sea levels will rise by one to 1.7m by 2100,” says researcher Irina Gorodetskaya of the University of Aveiro and lead author of the sixth assessment report published by the Intergovernmental Panel on Climate Change (IPCC).

Just days after the heatwave, satellite images confirmed the 1,200-square kilometer Conger ice shelf in East Antarctica had completely collapsed. The shelf has been weakening across time and according to experts the recent high temperatures may have been the straw that broke the camel’s back.

The scientific explanation for this latest heatwave in an area where the impact of climate change has been less pronounced lies in atmospheric rivers. It is noteworthy that not far from the Concordia research station is the Russian Vostok Station, where 40 years ago the lowest temperature ever recorded on earth was taken: -89ºC. “Eastern Antarctica has always been cold but in this instance an atmospheric river brought warmer and more humid air from Australian to Dome C, where Concordia is located, and it was trapped, causing a micro-greenhouse effect,” says Cordero.

“These warm air plumes tend not to extend that far due to a wall of circumpolar winds coming from the west that prevents them from getting in. It was an exceptional event,” says meteorologist Sergi González, a researcher with the Spanish State Meteorological Agency’s Antarctic team. “Now, the hole in the ozone layer strengthens these winds and, in March, this wall is also reinforced. It will have to be investigated, but what is significant is the accumulation of these types of events; at the end of the day there are more heatwaves than cold waves and even if there were no global climate change, their number would remain the same.”

Even when dealing with specific episodes, it is the frequency of these anomalies and their intensity in recent years that has set alarm bells ringing and experts fear that even the current climate change models, which are compiled in the reports issued by the IPCC, could be aiming low against the situation on the ground. “As we have seen with this recent heatwave in Antarctica, I would say the models are very conservative and the reality shows that climate change is not a question of the future, but of the present. These extreme events are still not well understood and the climate models could be underestimating them,” says Gorodetskaya.

In any case, climate change in the Antarctic is nothing new. Thirteen of the 17 meteorological stations that have spent more than 30 years recording temperatures have already registered increases in their annual averages and researchers forecast that by the end of the 21st century, heatwaves in the eastern Antarctic will increase in duration from nine to 25 days per season, and from nine to 18 days in the western peninsula. Temperatures will also increase, by up to 5ºC, although they are expected to remain below zero in the interior of the Antarctic Plateau.

“The projections show that not only will polar heatwaves increase in the future, but that every fraction of a degree in global warming will matter: the extreme temperatures that occur once every 50 years in a climate without human influence could now take place every 10 years, and a with a level of global warming of two degrees, they will be 14 times more frequent,” says Gorodetskaya. Despite these forecasts, contaminating emissions that cause these climate events continue to increase on a global scale and the current international context does not augur drastic measures being taken any time soon.

“If this differential of 40º had happened in the Antarctic peninsula, in just a few days there would have been a level of ice melt that would normally take years,” says Francisco Navarro, a glacier expert at the Technical University of Madrid. Navarro points to the melt that was caused by the 2020 heatwave in the glaciers that he has been monitoring for decades on Livingston Island. “The thermal wave can penetrate to a depth of 15m within a year and if it is persistent, the problem is even greater.”

The heatwave in the Arctic has come as less of a surprise, given it is already in an alarming state of melt that is almost three times as fast as the rest of the planet. There, these temperature rises have an immediate effect on the region’s inhabitants and indigenous fauna as well as increasing the risk of forest fires. In the Siberian Arctic, 38ºC was recorded in 2020 and in Greenland a year later, the mercury rose to 23.4ºC during a heatwave. This year, in the middle of winter and with no daylight hours, 0ºC has almost been reached in some areas.

The longer we wait, the greater the impact will be and the longer the period of irreversibility will also be

Researcher Irina Gorodetskaya, from the University of Aveiro

“In the Antarctic, the impact is not so sensitive in immediate terms, but the fauna also suffers. Furthermore, we lack understanding of the so-called high-impact, low-probability episodes, such as a sudden collapse of the West Antarctic ice sheet, but the consequences of sea-level rise and the destabilization of the climatic system will be enormous, if not catastrophic,” says Gorodetskaya, who in a few days will travel to the region for a research mission on the German-built High Altitude and Long-Range Research Aircraft (HALO). “We will fly along the warm air intrusions to measure the transformation of that air mass along its path. I want to look at the transition from snowfall to rainfall in atmospheric rivers in the Arctic and Antarctic,” the scientist says. The HALO was recently deployed to fly through a “river of warm air” that has reached Greenland from Canada.

As to whether we can return to a pre-global warming situation in the polar regions, Gorodetskaya is not optimistic. “We can slow it down, but the response of the Antarctic system is irreversible. Even if it can be slowed down or stopped, the impact will still last for 100 or even 1,000 years. Every additional degree of temperature and every heatwave obliges several future generations to commit to so-called negative emissions, that is to say reducing carbon in the atmosphere, even long after human-caused emissions reach zero. Changes in Arctic sea ice are reversible because they vary linearly with global surface temperatures; there is no tipping point. But the longer we wait, the greater the impact will be and the longer the period of irreversibility will also be.”

What all experts agree on is that research must continue to better understand these phenomena and their impact in the Arctic and Antarctic, but also that action to halt the emissions that cause them is of paramount importance.