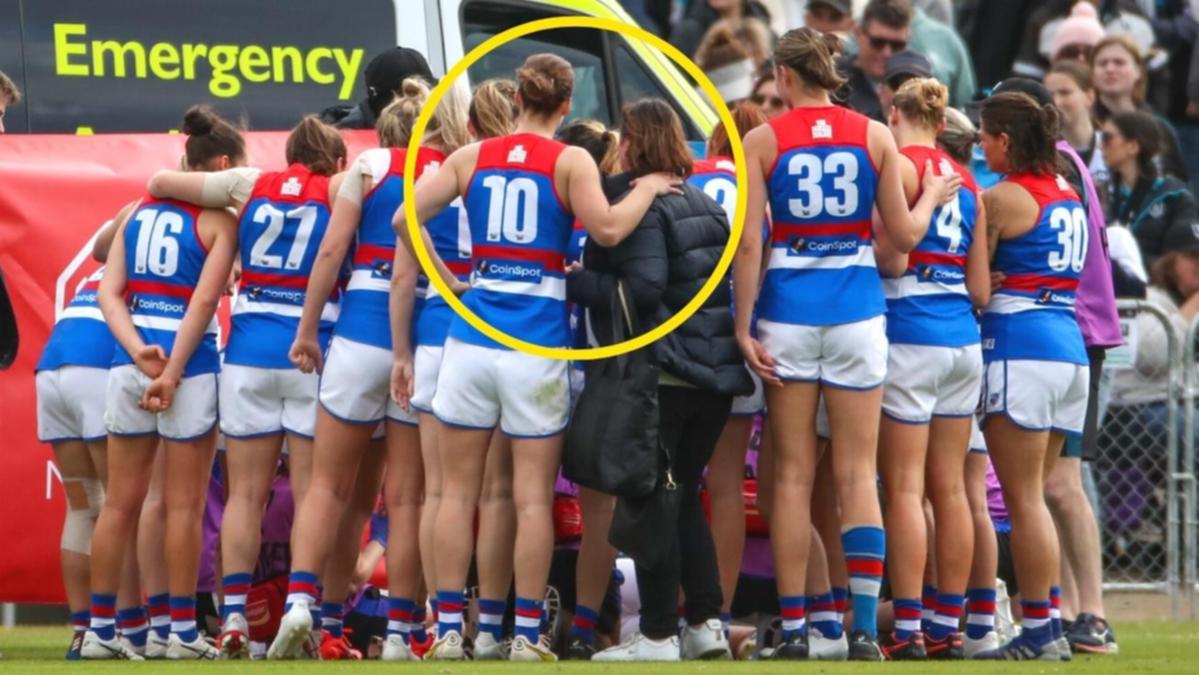 With 1:36 remaining in the first half on Saturday, the lower part of Gutknecht’s right leg snapped when Port’s Abbey Dowrick’s flying attempt to smother her opponent’s kick went horribly wrong.

Play was halted for 31 minutes while Gutknecht, in obvious agony, was attended to by trainers, medicos and paramedics before eventually being taken to hospital via ambulance.

Gutknecht had been playing well before the injury, which meant the second term lasted almost 50 minutes from siren to siren.

The Dogs were comfortably the better side in the first half, owning distinct advantages in disposals (106-78) and inside-50s (17-6), but their 1.7 conversion kept the Power in the hunt.

Blackburn, after a quiet start, had a major influence with her playmaking, while Kirsty Lamb and Isabelle Pritchard were busy.

Amid the flurry of Dogs misses, Richelle Cranston converted a free kick early in the second stanza, which was matched at the other end when Gemma Houghton, who nailed the Power’s historic maiden AFLW goal last week against West Coast, snapped Port’s first major at Alberton.

It was their only moment of joy for the day.

Power skipper Erin Phillips got going in the third period, almost having the parochial crowd on their feet when her left-foot snap looked on target, only to slam the ball into the woodwork.

Opposite number Blackburn’s nifty hands then set up Celine Moody’s major as the Bulldogs pushed ahead by 10 points at three-quarter-time.

Gabby Newton’s contested marking in attack was a feature of the fourth quarter, dominated completely by the visitors.

The Power gave away numerous free kicks towards the end and failed to enter their attacking 50 for the entire term as the Dogs continued to press home their advantage, only their inaccuracy in front of the sticks preventing a percentage pile-on.