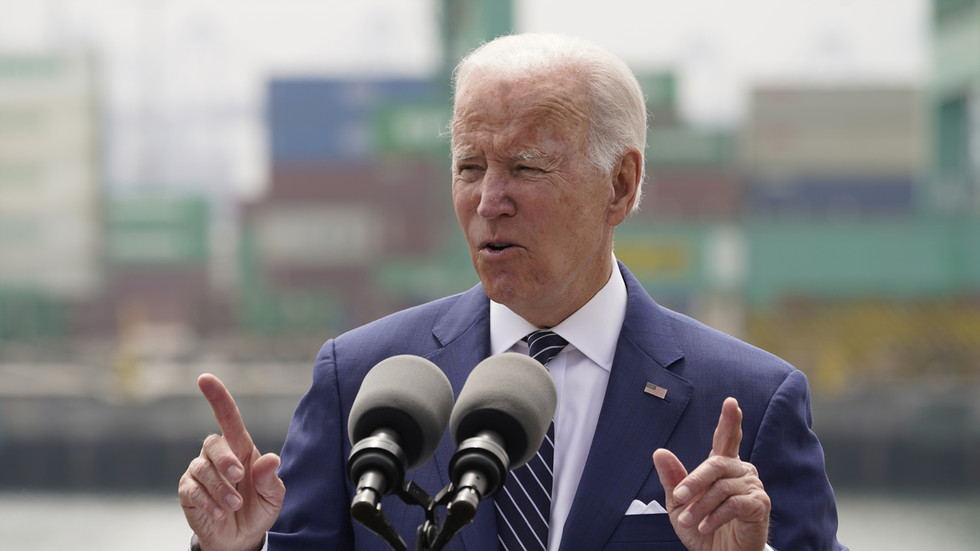 Responding to the worst inflation in 40 years, the US leader has stuck with blaming Russia

Speaking at the Port of Los Angeles, Biden touted his administration’s efforts to ease supply-chain backlogs and called on Congress to crack down on global shipping companies that he claimed had unfairly jacked up their prices since the Covid-19 pandemic.

However, his speech came hours after the Bureau of Labor Statistics released a grim report showing that consumer prices soared 8.6% in May from 12 months earlier, the highest rate of inflation since 1981. Food and gasoline prices rose by significantly more than 8.6%, with gas increasing by nearly 50% since last year, and reaching record highs in June.

Biden attempted to blame Putin for these costs in particular.

“Today’s inflation report confirms what Americans already know. Putin’s price hike is hitting America hard,” he declared. Insisting that the US job market is “the strongest it’s been since World War II,” Biden repeated “we’ve never seen anything like Putin’s tax on food and gas.”

Biden’s conservative critics have blamed his administration’s aggressive spending for driving inflation upwards, and his anti-fossil fuel policies – including bans on new drilling leases and a shutdown of the Canada-US Keystone XL pipeline during his first week in office – for raising fuel costs. Biden has also embargoed Russian oil and gas imports, which accounted for a small share of the US’ imports.

Some 71% of Americans disagree with Biden’s handling of inflation, according to an ABC News poll released last weekend. Additionally, the poll found that inflation and the economy rank highest among the issues voters consider “extremely important,” and that inflation is the “single most important issue” for more voters than any other issue.

Biden said on Friday that his administration’s efforts to lower prescription drug prices and high-speed internet costs would save working families some money, although the president conceded that these savings would not make up for increased fuel costs.