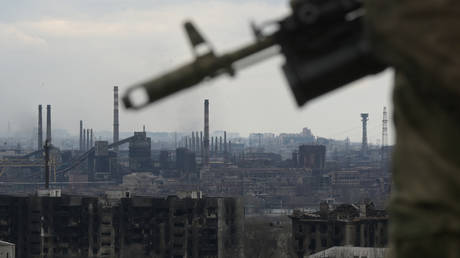 Ukrainian forces holed up at the Azovstal steel plant in the Black Sea port city of Mariupol have outlined their conditions to leave the besieged location.

Late on Wednesday, Svyatoslav Palamar, the deputy commander of the neo-Nazi Azov regiment, released a new video address, stating that the troops were ready to leave the plant with the support of an unspecified “third party.” The fighters want to keep their personal weapons, as well as to evacuate their wounded and fallen comrades. Palamar refused to surrender to Russian forces or troops of the Donetsk People’s Republic (DPR), which are besieging the sprawling industrial facility.

Earlier in the day, a similar address was released by Sergey Volyna, the commander of Ukraine’s 36th marines brigade, which is holed up at the plant as well. There are some 500 wounded fighters at the facility, as well as “hundreds” of civilians, Volyna claimed.

“This is our appeal to the world, this may be our last appeal. We may have only a few days or hours left,” he said. “We are asking to apply an extradition procedure to us and take us to the territory of a third state.”

The Russian military has admitted that a new attempt at organizing a humanitarian corridor for those willing to exit the Azovstal plant has flopped.

“We have to state that the declared humanitarian operation by the Kiev authorities was cynically disrupted, no one used the corridor. The commanders of the nationalist battalions did not use yet another opportunity to save themselves and the lives of their subordinates,” the military said, blasting the pleas by the besieged Ukrainian troops issued towards foreign nations.

Your address is misdirected. Russia has done everything to save your lives. You should have pleaded directly with the Ukrainian leadership, which treacherously abandoned you long ago.

“Due to the inherent disorganization and negligence of the occupiers, they were unable to provide timely transportation of people to the points where dozens of our buses and ambulances were waiting,” she alleged.

Russia attacked its neighbor following Ukraine’s failure to implement the terms of the Minsk agreements, signed in 2014, and Moscow’s eventual recognition of the Donbass republics of Donetsk and Lugansk. The German and French brokered Minsk Protocol was designed to give the breakaway regions special status within the Ukrainian state.