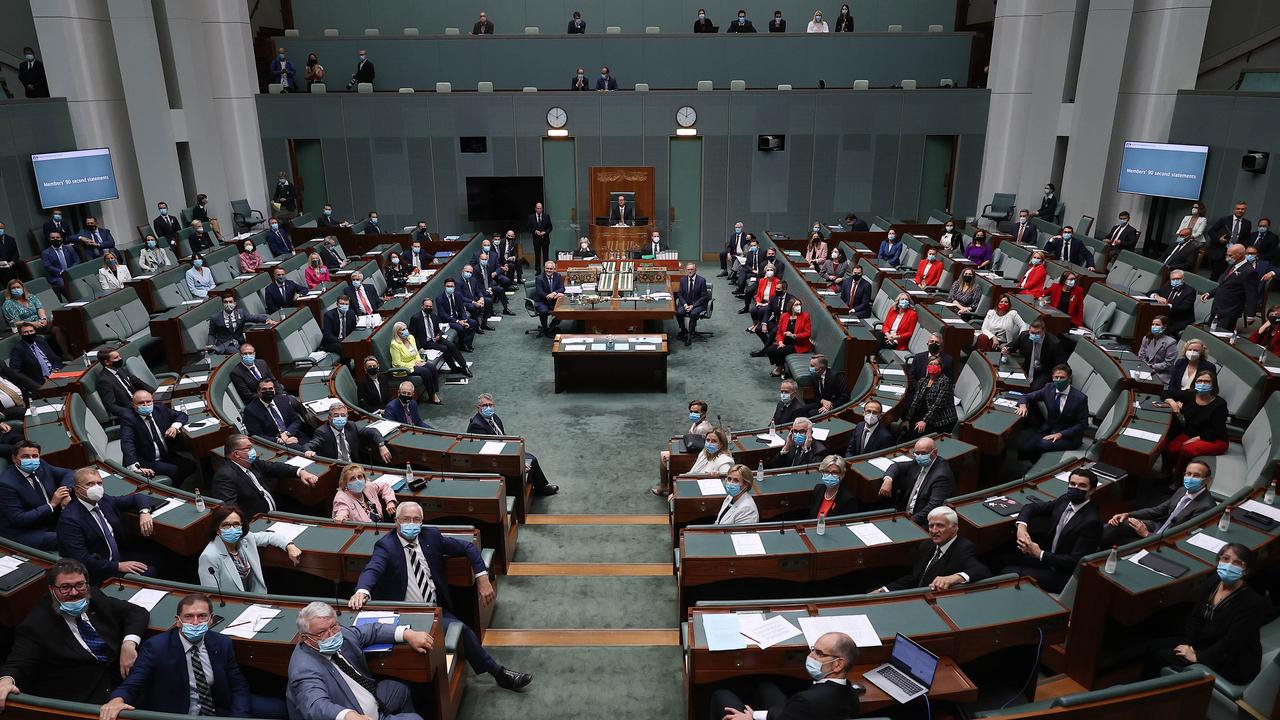 The May 21 election is shaping up to be a tight battle. Find out the key seats each party has their eye on.

Only a handful of seats are expected to determine the outcome of the federal election.

To form government, a political party needs to win a majority of the 151 seats in the House of Representatives.

For the Coalition and Labor, the magic number is 76. Fall short and the decision of who claims power will be left to the crossbench.

The opposition will require a uniform 3.3 per cent swing to gain the seven seats it needs to govern in its own right.

It will need to pick up marginal seats in Victoria and Tasmania and capitalise on sentiment in South Australia and Western Australia.

But Labor has 12 MPs with slim margins who will be fighting for their political lives, compared to the Coalition’s three.

Statistically, all the government needs to do is hold the seats it currently has, and recapture Hughes from ex-Liberal Craig Kelly and offset potential losses in Tasmania, Victoria, NSW or Queensland.

Typically much of the focus in election campaigns is in the key marginals – meaning seats where the sitting MP has a margin of under 6 per cent of the vote.

But a string of high profile retirements and changing demographics and priorities in what have traditionally been considered safe Labor and Liberal seats has set up interesting battles in unexpected areas.

Gilmore was just one of three seats which fell from the Coalition to Labor in the 2019 election.

First-term MP Fiona Phillips defeated candidate Warren Mundine – who was parachuted into the seat at the behest of Scott Morrison, despite a local candidate already being chosen.

A messy three-way contest with the Nationals followed, and gave Ms Phillips a pathway to victory.

But in a sign of just how serious the Liberals consider their chances, Gilmore was the first electorate the Prime Minister visited after he called the election.

The seat covers several towns along the NSW south coast which was badly hit by the 2019 summer bushfires.

The Coalition is optimistic the personal popularity of former state MP Andrew Constance – who struck a chord with the public for speaking out about the government’s response to the fires – will get them over the line.

The retirement of longtime MP Julie Owens has the Coalition optimistic it could capture the western Sydney seat.

It hopes the decision to parachute former Kevin Rudd staffer Andrew Charlton – who until recently lived in a $16m mansion in Bellevue Hill – over a local candidate could play in its favour.

However, the Liberal candidate is not without controversy herself.

Local businesswoman Maria Kovacic was one of the captain’s picks installed in nine seats after the Prime Minister’s intervention in NSW Liberal preselections.

An intense battle looms in Wentworth. Once considered the prized jewel in the Liberal Party crown, voters in the seat have already proven they’d be willing to vote independent under the right circumstances.

After being defeated in the by-election prompted by Malcolm Turnbull’s resignation, Dave Sharma returned in 2019 to take the seat from independent Kerryn Phelps.

But he only holds the seat on a small margin, and is being challenged by businesswoman independent Allegra Spender – the daughter and granddaughter of former Liberal MPs as well as the daughter of designer Carla Zampatti.

Once considered a Labor heartland, the opposition has been unable to win back the seat since it fell to Craig Laundy in 2013.

The seat is one of the most multicultural in NSW. According to the ABS, 56.3 per cent of people who live in Reid were born overseas and 55.3 per cent speak a language other than English at home.

Incumbent Fiona Martin experienced a 1.5 per cent swing against the Liberals at the last election. She recently caused a stir when she crossed the floor to sink the government’s religious discrimination bill.

She is being challenged by PhD candidate and daughter of Chinese immigrants Sally Sitou.

Susan Templeman was re-elected to Australia’s most marginal seat by just 371 votes in 2019.

But since then, the area has been hit by bushfires and floods, so recovery and clean up efforts are likely to be front of mind issues for voters.

The Labor MP is facing a challenge from Liberal candidate Sarah Richards, a Hawkesbury city councillor and former solicitor who also stood for election in 2019.

It’s considered a must win for the Liberals if it is expected to offset losses elsewhere, and is the reason why Mr Morrison visited the seat so early on in the campaign.

Honourable mentions: Keen election watchers will keep a close eye on the outcome in North Sydney and Makaller where moderate Liberals Trent Zimmerman and Jason Falinski are also facing a tough challenge by local independents.

The retirement of Joel Fitzgibbon in Hunter has also set up a close battle between Labor candidate Dan Repacholi and the Nationals’ James Thomson.

Located in Melbourne’s eastern suburbs, the electorate of Chisholm is the government’s second most marginal seat.

It is one of the nation’s most diverse seats and has a large Chinese-Australian population.

Incumbent Gladys Liu won by just under 1,100 at the 2019 election after being selected as the candidate following Julia Banks’ defection to the crossbench.

Goldstein has been considered a safe Liberal seat since its creation in 1984.

But the candidacy of former ABC journalist Zoe Daniel into the race is expected to cause headaches for moderate Liberal MP Tim Wilson.

He has a healthy margin, but if pre-climate change independents learned anything from the 2019 ousting of Tony Abbott in Warringah, it’s that anything can happen.

Early polling suggests it could ultimately be a tight race for Mr Wilson, who was first elected in 2016.

Corangamite was one of the three seats which fell to Labor in 2019, and is being recontested by first-term MP Libby Coker.

An influx of voters moving into the electorate over the past three years has caused the seat to shrink in size and centre more around Geelong rather than the Great Ocean Road region it traditionally held.

The changed boundaries are expected to work in Labor’s favour, but considering the seat’s history of swinging voters, anything could happen.

Ms Coker is facing a challenge by local mayor Stephanie Asher – who previously stood as an independent for the neighbouring seat of Corio in 2013.

The celebrity factor of two-time Survivor runner up Sharn Coombes could prove challenging for Labor’s Peta Murphy in Dunkley.

Elsewhere, the Liberals will be hoping to retain Casey after popular speaker Tony Smith stood down. The retirement of Damian Drum has also set up an interesting three-way National-Liberal-independent contest in the traditionally safe Nicholls.

First-term MP Terry Young will be hoping to buck the trend that’s seen Longman change hands at four of the last five elections.

A predominantly urban electorate covering areas between Brisbane and the Sunshine Coast, the seat tends to swing quite widely from election to election. One Nation preferences in 2016 handed the seat to Labor, who were unable to hold it in 2019.

The seat is considered a must win by both sides.

Honourable mentions: The retirement of sitting MP Ken O’Dowd has lifted Labor’s hopes it could seize the northern Queensland seat of Flynn. The opposition also believes it is in the running to capture Brisbane and Leichhardt.

Just one sitting member has been re-elected in Bass since 1993 – giving the seat the nickname of Australia’s “ejector seat”.

Ms Archer, who won by just 583 votes in 2019, has made a name for herself as being not afraid to speak out against the Prime Minister and the government over the parliamentary term.

Her increased profile could work in her favour as she seeks to defeat challenger Ross Hart. Mr Hart himself was the MP for Bass until deposed in 2019.

A wildcard in this race could be the impact of Jacqui Lambie Network candidate Bob Salt.

Honourable mentions: Bass’ twin seat of Braddon also has a reasonable number of swinging voters and incumbent Gavin Pearce will be hoping Jacqui Lambie Network candidate Sophie Lehman does not cause too much of a splash. Meanwhile in Lyons, the Liberals are hoping for a better performance after it was forced to dump candidate Jessica Whelan late in the campaign over racist social media posts.

Despite the Coalition having held the seat since 1949, Labor has been touting its chances to capture Boothby for years.

But the retirement of sitting MP Nicolle Flint and the recent South Australian election result has given the opposition renewed hope of a win in what is considered the state’s only marginal seat.

Rachel Swift – a medical researcher and management consultant – is hoping to replace Ms Flint. Her path to victory will be made more complicated by the challenge from independent MP Jo Dyer, who came to public attention over her advocacy on behalf of a deceased friend who had accused former minister Christian Porter of rape.

Lingiari is considered a wildcard due to the retirement of the last MP who sat in Old Parliament House, Warren Snowdon, who has represented the seat for two decades.

The electorate covers the majority of the Northern Territory and takes in the Cocos Islands and Christmas Island. It is almost impossible to poll.

Originally published as Battleground seats: Where the election will be won and lost