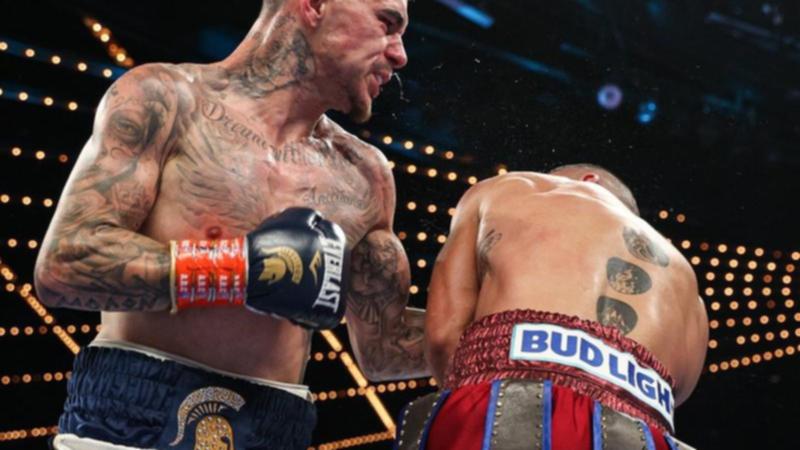 George Kambosos Jr has etched his name in Australian boxing folklore with a stunning points victory over Teofimo Lopez in their unified lightweight championship grudge match in New York.

As he boldly predicted during the spiteful build-up, Kambosos is the new undisputed world champion after defying the odds to strip the previously unbeaten Lopez of his WBO, WBA and IBF titles with a mighty performance at Madison Square Garden.

The 28-year-old from Sydney is the first Australian boxer in history to win three world title belts in one bout, a feat that eluded even Jeff Fenech and Kostya Tszyu, both widely recognised as the country’s two greatest pugilists.

Kambosos was a huge underdog to beat Lopez (16-0, 12KO) with the American adamant he’d take the challenger out in the first round.

Kambosos was having none of it, insisting three years serving as legendary Manny Pacquiao’s sparring partner in the Philippines had steeled him for the biggest fight of his life.

“Back yourself, believe in yourself,” he said after winning on a split decision.

“I said it time after time – you guys might not believe it – but I believe in myself and look at me now.

“I’ve got all the jewels. I’m not the king. You’ve got your four kings. I’m the emperor because I come to every other country and I take them out, one by one.

The blockbuster had been more than a year in the making following a staggering seven postponements, six different proposed locations and numerous legal challenges in a soap-opera build-up featuring in-fighting between boxers, promoters and lawsuits.

Both combatants were back in the ring for the first time since October 2020, when Lopez, already the IBF lightweight champion, upset Vasiliy Lomachenko in Las Vegas to strip the Ukraine of his WBA and WBO straps.

Kambosos earned his shot at history with a split decision against Brit Lee Selby at Wembley more than a year ago but was forced to wait an extra five months after Lopez contracted COVID-19 before their most recent scheduled clash on June 29.

The pair traded verbal barbs for months during a bitter lead-up that climaxed when the two fighters’ fathers physically clashed in a gymnasium during a media call last week.

The referee had his work cut out even before the bout trying keep the rivals apart, with Lopez warned “to keep it clean” in the first round for hitting Kambosos on the break.

Chasing an early knockout, Lopez came out feverishly throwing punches and landing a series of heavy blows to Kambosos’ head in the wild opening round.

But, standing his ground, it was Kambosos who took the round after dropping Lopez to the canvas with a thunderous right overhand.

It was the first time since Lopez’s professional debut five years ago that the American had been sent to the canvas, prompting US commentators to brand the champion’s brazen tactics as “amateurish” and “disrespectful”.

The two warriors traded verbal expletives long after the round finished, and continued to do so throughout the epic encounter.

Kambosos was within sight of Australian boxing immortality, leading the contest through nine rounds.

But Lopez hurt him with a big right in the ninth round, then rocked and dropped Kambosos in the 10th.

There was no surrender from Kambosos, though, as the challenger dominated the 11th round to seemingly put his nose back in front.

He was duly awarded the fight – and all the spoils – after holding firm in the final championship round, despite protests from Lopez that he’d won.