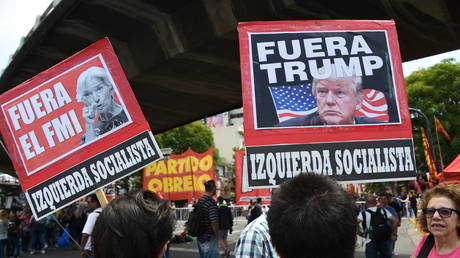 Argentina’s Vice President Cristina Kirchner was threatened by an armed person near her home in Buenos Aires, with a gunman seen pointing a firearm at the VP’s face before she was whisked away to safety. No shots were fired and the official was not injured.

The apparent attempt on Kirchner’s life was caught on film by local news crews on Thursday night as the VP made her way through a bustling crowd near her residence, which gathered to show support amid an ongoing corruption trial.

A hand wielding a pistol is briefly seen in front of Kirchner, who quickly ducks out of the way following what appears to be a loud click. Some reports suggested the weapon misfired, but it’s unclear from the footage whether the person actually tried to pull the trigger.

An individual was arrested on the spot and a firearm was found by police several meters away, according to local media reports, which claimed the attacker is a 35-year-old Brazilian national. Officials have yet to confirm details about the perpetrator, however.

Law enforcement sources told Argentina’s Clarin media outlet the man was carrying a .380 caliber pistol with a loaded magazine, while the Minister of Security Anibal Fernandez noted the suspect has a criminal history and was last arrested in March.

Economy Minister Sergio Massa was among the first officials to react to the incident, taking to Twitter to denounce the attack.

“When hate and violence prevail over the debate of ideas, they destroy societies and generate situations like today’s: an assassination attempt,” he wrote, declaring his “solidarity” with the VP and her family while voicing hopes the assailant is brought to justice.

Kirchner, who previously served as Argentina’s president between 2007 and 2015, is currently facing corruption charges over an alleged scheme to funnel state funds to a family friend through public contracts. Though the lead prosecutor on the case recently asked a federal court to hand Kirchner a 12-year prison sentence, the VP has vocally denied the allegations and claims she has been targeted for political persecution.