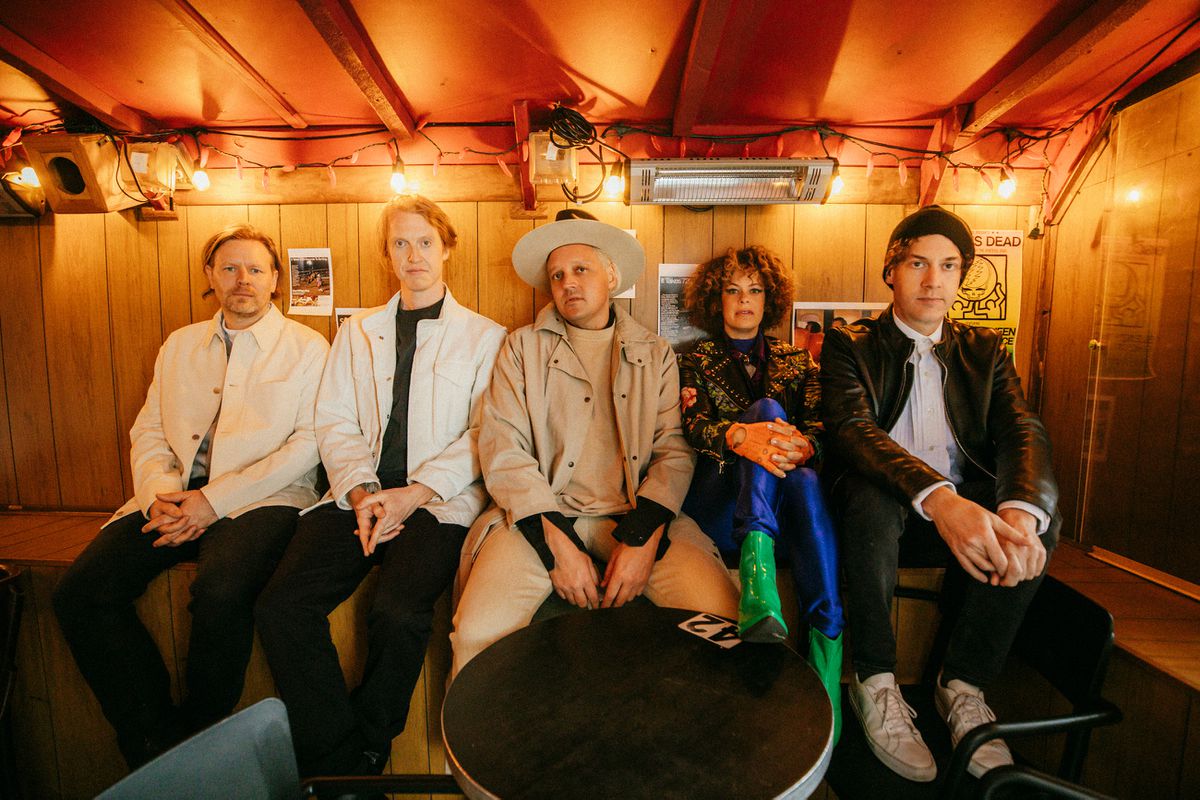 Pixies lead singer Frank Black once said that there are no bad interviews, only bad interviewees: a journalist can prepare the best questions in the world, but if their subject doesn’t feel like talking, they won’t open their mouth. The next day, the person may spill their life story at a “hello.” Win Butler and Régine Chassagne, the two leads of Arcade Fire, confirm this theory.

The couple, who are partners both romantically and professionally, don’t need much to get talking, though what they say can be confusing.This month, the group releases “We,” their sixth album and their first since 2017. It’s a concept album, they say. But what is the concept?

“There is a black hole in the middle of our solar system called Sagittarius A*. And it’s like… for me the idea was like… There’s a character who looks like…,” Win Butler begins hesitantly before launching into an explanation: “At first the guy says, ‘Get me out of here, I want to get as fucking far away as possible, I want to get away from all this shit, where can I go to escape from myself, from the horror of this world?’ Then he sees that black hole and thinks: ‘Well, if I get there, maybe that will do it. If I can get through that hole, I’ll be away from all this shit. And when you get there, it turns out that this black hole is your eyeball. It’s the same. It is your inner life. All the beings he has ever loved are there, everything he’s done, the good shit and the bad. It is the shadows, it is the light, everything. We spend a lot of time trying to escape from ourselves, trying to run away from something that has no escape.”

Butler and Chassagne both speak as if releasing an unending stream of information from their memories, and as happens when one speaks from memory, much of what they say is inaccurate: they say “solar system” instead of “galaxy;” they confuse poems by Mayakovsky; they quote Gustavo Gutierrez, a Peruvian liberation theologian and priest, and refer to a book that is actually an article. In spite of everything, what they mean is almost always understood.

They are sitting next to each other in their home recording studio in New Orleans. “On the other side of the gate is our backyard. It is a very small studio. In the 19th century, it was the kitchen,” explains Butler. “It’s tiny, look,” Chassagne adds. She stands up and extends her arms to show that she can almost touch both walls with her fingers. She speaks English with a Québécois accent. Next to her husband, who has the body of an NBA player, she looks like a miniature. The couple has fronted Arcade Fire since they founded the band in 2000, in Montreal. Butler, raised in Texas, had moved to the city to study at McGill University. The band also included Will, Win’s brother who has just announced that he is leaving the group, and three college classmates.

Arcade Fire’s 2004 album “Funeral” made them famous worldwide. And they started a trend: their unique mix of folk, pop and rock has been imitated for almost two decades. Their influences are clear by the endless pseudo-indie groups–no need to name names–who use synthesizers like church organs, combine symphonically intense violins, accordions and military-style drums, and feature voices singing in unison and choruses of oh’s written for crowds to sing at festivals.

Shortly after the release of ‘Funeral,’ in 2005, David Bowie joined the group on stage at an awards show to sing “Wake Up,” a song that condenses everything Arcade Fire into five minutes and 50 seconds. The performance only accelerated the band’s rise to fame, and Bowie’s influence is present on their new album. “There was a portrait of Bowie on that wall,” says Butler, pointing to a wall in the studio. “A curious thing happened to us with this new album. We were here recording a song, ‘Rabbit Hole,’ where there is a verse that says: ‘Rabbit hole, plastic soul.’ Plastic soul is how Bowie described the music of the time he wrote ‘Fame.’ And there I was, recording a vocal take, which ended up being the definitive one, and quoting Bowie, suddenly there was a strange noise. I asked, ‘what’s that sound?’ My engineer took off his headphones and started looking with me. In the other corner of the room, on my cell phone, I don’t know how, a song from [Bowie’s 1977 record] Low was playing. It was in the same key as our song. I don’t believe in that shit, but it was amazing. That’s why one of the first people we thank on the album is Bowie. At the time, he…I don’t know, he felt a connection with us. He didn’t want anything from us. Just to give us strength.”

Arcade Fire’s romance with critics and the public lasted until 2017. Each of their previous releases had been applauded as a step forward, but that year’s album “‘Everything Now” was poorly received. Some said it was too cold, others that it was too pop. The group lashed out at the criticism, though they now deny having done so: “We are very hard on each other. There are no critiques anyone can make of us that we haven’t given ourselves before. And once you’ve survived that crusher…” says Chassagne, before Butler speaks up. “Once, Neil Young, one of our idols, played in Montreal on Thanksgiving and hosted a little dinner at a restaurant. We were recording there, and we went by. As Neil was leaving, he came up to us: ‘Are you recording? Have a good time.’ And he walks away. But before leaving, he turns and says: ‘Or better yet, have a terrible time. This can’t be easy.’ Recording an album is not fun. It can be enjoyable, but it can also involve the most miserable moments of your life, and, for 20 years, you won’t know if it’s good or bad. You can get good reviews for shitty records and bad reviews for a great one. Time is the only judge you can trust.” Chassagne interjects: “For us, music is not a hobby, it is a calling. We would die for art, both of us.” Butler notes, “Some songs take 20 years to write, others take 20 minutes, and anything else you do is just going to screw them up. It’s like children. Some parents think they can control them, but they are who they are. All you can do is try not to screw it up. You will not be able to make them smarter or more beautiful. The only thing you can do is love them and learn from them. And music is similar. We are here to learn from the songs. We do not see ourselves as writing them. We are their servants. We translate them.”

Butler and Chassagne have a nine-year-old son named Edwin, after his father, grandfather and great-grandfather. “We couldn’t have made the record without him. He was always with us. And, believe it or not, he has a pretty strong musical instinct,” says Win. Will another Butler become a musician? “Could be. My grandfather [Alvino Rey] was the second jazz guitarist in history. There was one before him, only one. My mother [Liza Rey Butler], who sings on the record, is a professional harpist. My son can be whatever he wants. Music is a spirit that settles in you. Once it chooses you and it’s in you, you can’t get it out.”

Régine’s family is originally from Haiti, and they fled to Canada to escape the Duvalier dictatorship. “We” features one of her idols: 72-year-old Peter Gabriel, the original frontman of the progressive rock group Genesis and later a champion of world music. “The kind of revolution that was born in the US with the hippies in the sixties never reached Quebec. Everything was so controlled by the Catholic church that the Summer of Love [1967] happened in the seventies. So Genesis was to here what the Beatles were to America. It was all around me growing up. Later, Peter Gabriel opened us up to world music, to drums. My family is from Haiti, which is Africa in many ways. But in Montreal everyone was very white and very normative and those drums were my only access to that other world. I remember being in the supermarket, listening to them and thinking: ‘Hey, I know this!”

It won’t be long before Arcade Fire goes back on tour. “If the world is still standing,” jokes Butler. “Every day I wake up expecting to read that the stock market has collapsed and that the system has collapsed. My grandfather was in New York at the time of the 1929 crash. He was 22 years old, playing jazz at night and working on the Empire State building site by day. And even though everything went to shit, in 1931 they finished the building. Can you believe it? Everything was fucked and they continued. All art that matters is born from the worst moments. It comes out of stress, and during the bad times that it counts the most. That’s what music is about. When I listen to an album, not a song but an entire album, I see the world through different eyes. In the end, it’s about staying in touch with humanity.”