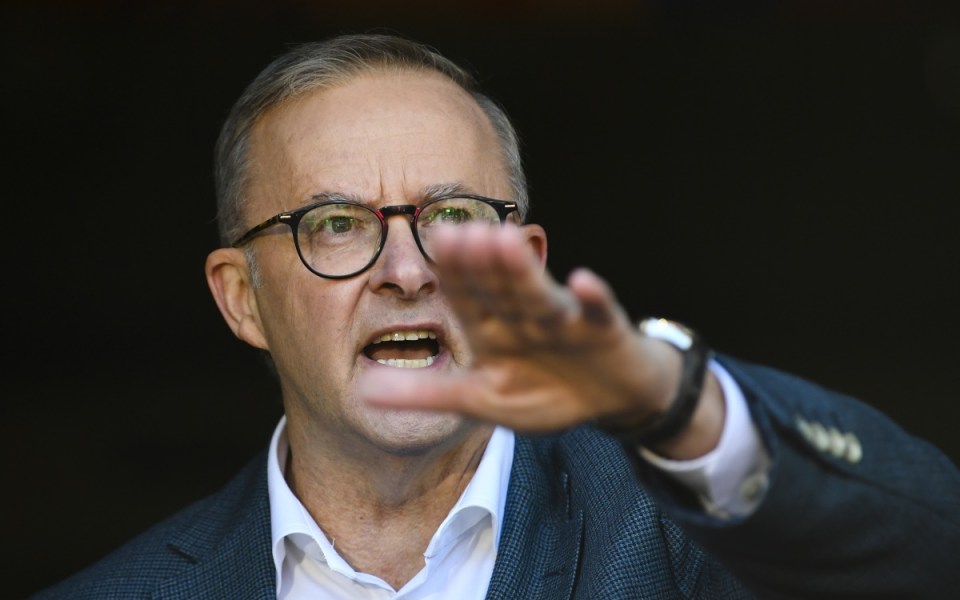 In a heated media briefing in Sydney on Friday, one journalist was also heckled by a watching member of the public and told to “smarten their act up”.

It came as Mr Albanese faced another tough grilling, repeatedly being asked about his policy pledges and dodging questions about concrete commitments.

Repeatedly asked whether Labor would guarantee no cuts to healthcare, NDIS or education, Mr Albanese was steadfast that “Labor will always be better on health, education and the NDIS”.

Asked to clarify whether this meant no cuts to the services, he lashed out at “gotcha questions”.

“You cannot have a clearer answer than that. Labor is putting additional funding into health, education and the NDIS and we stand by it,” he said.

“You know what puts people off politics? That sort of word game. That is very clear. It can’t be clearer. We stand by our additional funding. That’s not a cut.”

Mr Albanese and some of his supporters in his electorate of Grayndler in Sydney’s inner-west also hit out at journalists asking whether he would front up over his NDIS misstep on Thursday, when he was stumped on the policy’s detail.

One woman told a journalist who asked if Mr Albanese would stick by his pledge to own up to his mistakes to “shut up” and “move on to something more important”.

“Do they really think that the public are unable to know what’s going on? They’ll just turn off the channel. That’s what you do. No one has to be listening to anything anymore if they don’t want to. So they need to smarten their act up,” she later told News Ltd.

In an increasingly bruising clash, one journalist even asked Mr Albanese: “How are you going to stand up to Xi Jinping if you can’t stand up to us?”

There was a further odd line of questioning, when one journalist appeared to ask the Labor leader if he was taking afternoon naps since having COVID.

Journalist: “[Scott Morrison] is racing between different electorates. It is a slower pace for you. I want to ask, how are you feeling post-Covid? Are you still going to rest into polling day?”

Mr Albanese: “In terms of my health. Look, it is still – I think you have had COVID. It has an impact, doesn’t it?”

Journalist: “I haven’t needed to have a nap in the afternoon. You are running for prime minister. Are you match fit?”

Mr Albanese: “Well, yesterday I got up in the morning and did breakfast TV. I went into a smart energy expo in at the Convention Centre, I talked to providers there. I then did a press conference. I then went down and had a meeting with the Australian Chamber of Commerce and Industry. I then went up to the CPO, the Commonwealth Parliamentary Offices and had more meetings. I then went and spoke at a lunch at the Australian Chamber of Commerce and Industry and gave a considered, extensive economic speech about a better future and about productivity. I then went into my electorate office in Marrickville and then I did Q+A last night. I think that’s a pretty good.

“Today I am doing this event and then doing some other work that needs to be done and them I will be in Parramatta later on. I look forward to seeing you in Parramatta,” he finished.

Mr Albanese said the NDIS wasn’t about “gotcha questions”, and reiterated that he knew his own policy, despite needing to be handed his brief by an adviser mid-press conference on Thursday.

“What leadership is about is determining when there is a problem identifying and then coming up with solutions,” he hit back.

“We’re providing real help to real people. We have real issues in this country and Labor has real plans to fix them.”

Facing Q+A on Thursday night, Mr Albanese said a Labor government would put downward pressure on inflation by increasing productivity and remaining measured in its spending.

When asked on Friday what Labor would do in the short to medium term with big policy items such as childcare, affordable housing and women’s economic participation taking time to implement, he said a review into wasteful government spending would be underway by the end of the year.

“We have a plan to make sure that all of our expenditures or big commitments that we’re making are ones that will grow the economy,” he said.

“We’ve prioritised those investments but we’ve also said in terms of expenditure, and putting downward pressure on that, we’ll have a review of government expenditure by treasury and finance.

“We’ll go through it line by line where we can make a difference … and we’ll do that before the end of the year,” Mr Albanese said.

But Labor has dumped its promise to include superannuation on government-funded parental leave, which is mostly accessed by women.

The policy was taken to the 2019 election and was still touted as policy as recently as 2021. Mr Albanese said budget pressures meant something had to give.

“What we’re doing is being responsible. We’re being very measured. Would this be a good thing to do? Yes, it would be,” he said.

“It is something we will examine in government within a range of areas. What we’re not doing is saying one thing before the election and something else afterwards.”