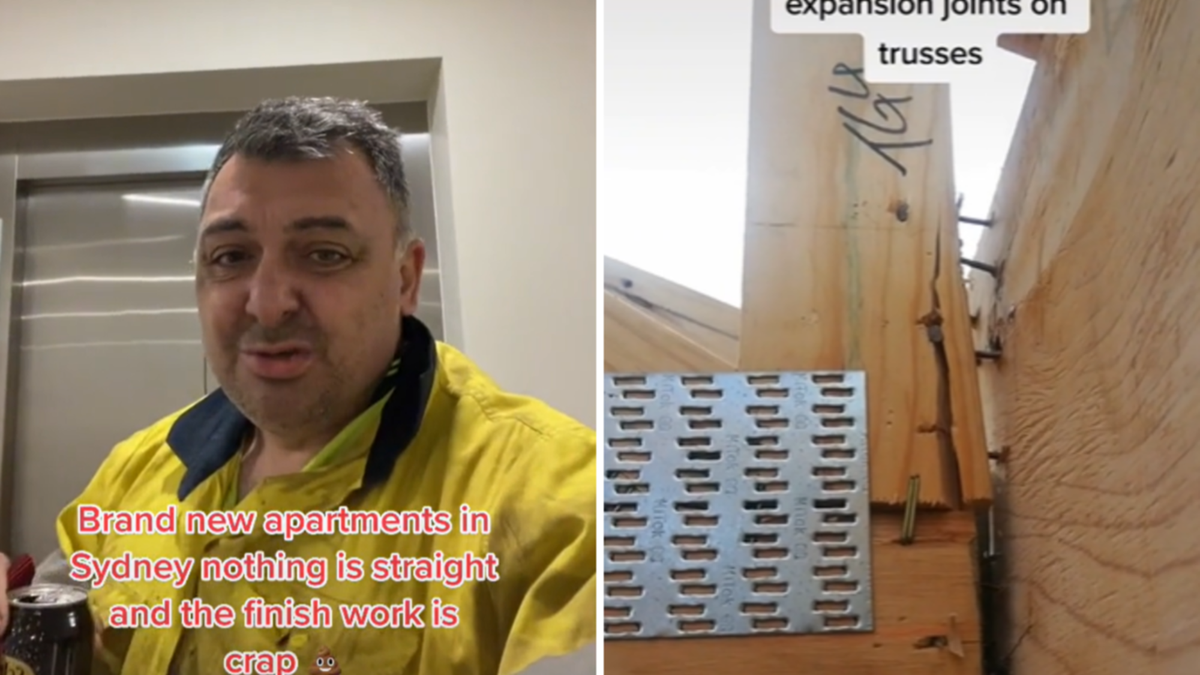 Stunned tradies are taking to social media and posting examples of poor workmanship in newly built apartments and homes in Australia, claiming the quality of work is terrible.

A Sydney tiler, known on TikTok as @monkey8u, slammed a job that had been completed by other workers at a brand-new Sydney apartment complex.

WATCH THE VIDEO ABOVE: Tradies slam the quality work in new apartments

In the video, he takes a tour of the “finished” apartment, which revealed a bathroom where the shower has been left unsealed and the tiles without grout.

It is unclear where in Sydney the apartment is located.

“Everywhere you go, it’s like a kid’s done it. This is what you get these days in Sydney.”

The tiler isn’t the only one who says they’re fed up with dodgy builds.

Many others from the industry have come forward to share their experiences, along with apartment owners who claim the jobs on their brand-new complexes have been shocking.

Videos of dodgy constructions jobs in Melbourne show the issue is not just in Sydney.

Some of these are jobs at stand-alone suburban homes around Melbourne.

His latest was a house in Donnybrook in Melbourne’s north.

According to the inspector, the home which was supposed to be ready in January remains incomplete and is littered with defects.

‘Never buy anything built after the ’90s’

Many people have agreed with the Sydney tiler and the building inspector, claiming they have noticed a difference in the quality of work.

“I’m not even a builder but I’ve lived in old houses compared to brand-new apartments, and you can see the difference in craftsmanship and materials,” one TikTok user commented.

Others slammed real estate agents and suggested they will charge $1,000 or more in rent for apartments that have not been built properly.

One woman commented: “They’ll rent them … and never fix any of the problems that arise from it all (then) take the renter’s bond for the damage.”

“Thank you for sharing this. People need to be aware because it’s becoming a big issue with all the units popping up,” another added.

Some even went as far to say that they would never buy anything built after 1990, given this appears to be the new normal in cities such as Sydney and Melbourne.

“This is why I’ve bought a 153-year-old home in the Hunter Valley – might need new joists and lime plaster, but is solid AF!” one user said.

“My mortgage broker told me not to buy anything built after the ’90s, and now I know why.”