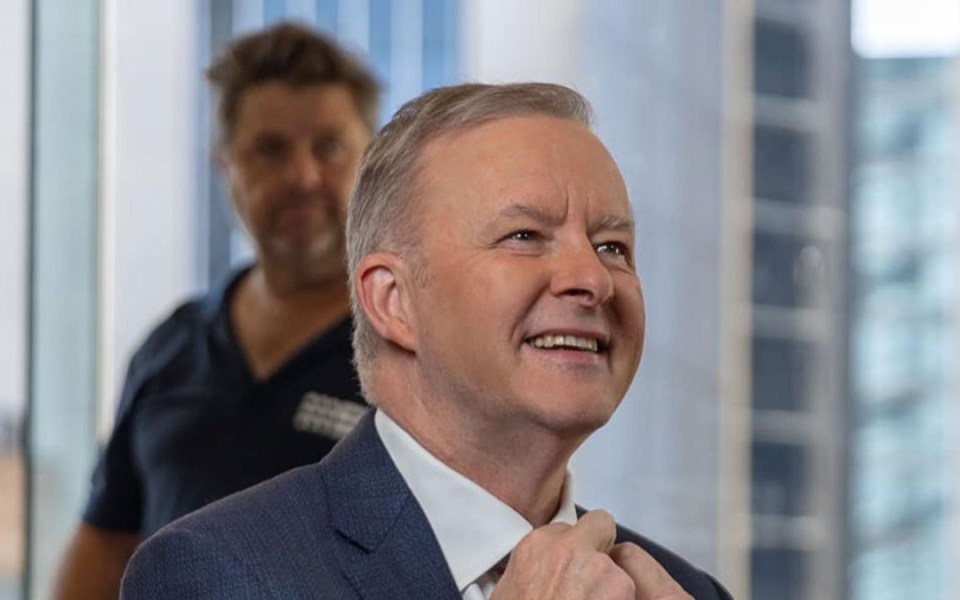 In an election campaign where 12 hours can’t pass without someone getting their hair on fire, the end of the second week expect-the-unexpected swerve for Anthony Albanese shouldn’t be surprising or difficult to manage for Labor.

Labor always knew being infected was one of the “most likely problems” they’d encounter. Scott Morrison had his own run around the virus paddock in early March, around 50,000 Australians are contracting COVID-19 every day and campaigns are by definition up-close-and-personal events.

So until next Thursday night, Albanese is confined to his Marrickville home in a physical sense but not in a political sense – not by a long shot.

Morrison was lucky to have been almost without symptoms – he was reported as “feeling under the weather” – and he carried out most engagements he could, including virtual attendance at a meeting of the multi-nation Quad group, addressing the Lowy Institute, a business leaders’ summit and being called in for numerous media interviews.

Albanese will do much the same, providing he doesn’t get any sicker than the reportedly asymptomatic condition with which he has started his brush with the virus.

Almost always, people are more unwell in the first 24 or so hours. If Albanese is feeling as relatively okay tonight as he says he was last night he should be good to go for the rest of the time in isolation.

With 5.56 million Australians having come down with the virus this year – that’s not a misprint – plenty of people will understand what Albanese is dealing with.

This is the basic background to what’s going on and how it might impact Albanese and Labor’s campaign. The top-line assessment is this: unless there are any serious “unknown unknowns” this will almost certainly be a campaign benefit for the Labor leader.

The top reason for this is Morrison is going to have to dial down his direct attacks on Albanese. The Coalition leader will continue to amp up assaults on Labor policies and go after some of his favourite targets, such as shadow treasurer Jim Chalmers (whom Morrison likes to call “slippery”) and Labor deputy Richard Marles (the recipient of the “Manchurian candidate” barb over China).

He will also pursue criticisms of Labor policies and his assertion they don’t really have any.

However, this will be away from his political target of choice during the campaign – the Labor leader himself.

The Coalition’s game plan has always had a goal of pushing Albanese into negative territory – and dragging Labor’s primary support down with it.

There has been some evidence this was working a bit in the first week or so – albeit without any concurrent benefit in Coalition voting support. Without Albanese in the frame, this will be hard if not impossible.

Morrison might be tempted, especially if the Labor leader keeps issuing criticisms and political barbs from isolation. When Morrison had COVID-19, Albanese did 19 news conferences and interviews while his opponent was in isolation, although he blunted his criticisms.

It’s probably safe to say Morrison won’t repeat one of the great stuff-ups a leader made in commenting on an opponent who fell ill – the time in 1974 when the New Zealand National Party’s Robert Muldoon sent the Prime Minister Norm Kirk a telegram after the Labour leader was rushed to hospital with a heart attack.

“Get well soon Norm, a pensioner needs your bed,” read Muldoon’s “what was he thinking” effort. While Muldoon never lived down the telegram, he did go on to run NZ for a decade.

Historic stuff-ups aside, Albanese can also benefit from conducting his business in a more controlled environment, away from the all-in yapping news conferences and the sometimes belligerent attitude of some inquisitors.

While Albanese is broadcasting from his make-shift “Radio Free Marrickville”, his team – Chalmers, Marles, Tanya Plibersek, Katy Gallagher and company – will be out on the road providing complementary pictures to go with the story.

Contracting the virus might also prompt some in the community to refocus on a pandemic that’s fading from people’s minds. This could revive memories of “it’s not a race”, the vaccine “stroll-out”, dropping the ball on RATs and the treatment of aged care patients. Not territory the Coalition wants to come back into gaze.

If the surrogates manage to stick to the script and nothing unexpected, unknown or uncontrollable turns up, this could be a small, first half of the campaign advantage to Labor.

It’s a bit like a horse in the Melbourne Cup going off-the-bit and settling into a steady pace in the second 800 metres of the 3200m event. A mare called Verry Elleegant did it last November.

This article first appeared in InQueensland. Read the original here